All Hulk, All the Time 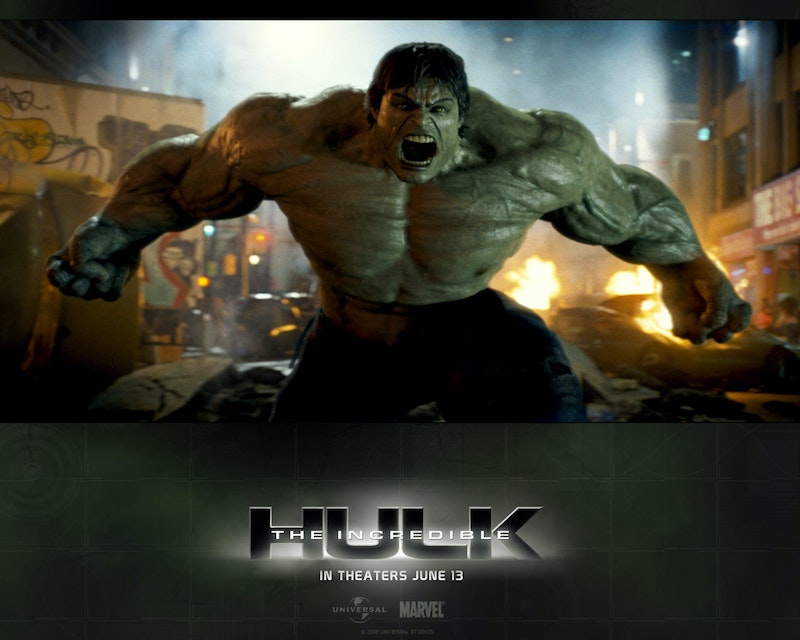 I admit it: I don’t get the Incredible Hulk.

Never did, really. As a kid I was way more into the DC universe—Batman, Superman, occasionally the Flash—than I was Marvel’s lineup of Spider-Man, the Hulk, Iron Man, and the like. And while this served me well in the late 1970s/early 80s with the Christopher Reeve Superman flicks from the Richards Donner and Lester, and Tim Burton’s Batman films, for most of the 90s and 00s it’s been a mostly Marvel-ous time at the cinema: Tobey Maguire’s Spidey, the X-Men saga, Robert Downey as Iron Man … hell, I even caught up with Ben Affleck’s Daredevil and Jennifer Garner’s Elektra on cable. (Never the Jessica Alba/Michael Chiklis Fantastic Four flicks, though. You gotta draw the line somewhere.)

But the adventures of Dr. Bruce Banner, who when suitably angry turns green and rips through most of his clothes (for propriety’s sake, the trousers—usually purple in the original comic—stayed on) to beat up the bad guys? Nah.

My problem doubtless stems from the Bill Bixby/Lou Ferrigno TV series of 1978-82. By that time I’d left my once-beloved Batman comics behind, as well as such human-with-superpowers TV concerns like The Six Million Dollar Man, and while I had a soft spot for Bixby—an underrated actor whose subtlety on such series as The Courtship of Eddie’s Father and the little-remembered The Magician deserves reappraisal—a couple of visits with The Incredible Hulk, which struck me as essentially The Fugitive with steroids, were enough.

The Hulk faded from popularity in the ensuing years; beyond the comics, the franchise limped along with a couple of animated series and some TV movie reunions with Bixby and Ferrigno (the last one, 1990’s bluntly titled The Death of the Incredible Hulk, really did end with the green guy’s last gasp). So things remained until 2003 when, spurred by the massive success of the Spider-Man and X-Men films, Ang Lee was signed to deliver a new Hulk.

That film was a bomb, with Lee’s attempts at soldering on his trademark introspective themes going for naught (and, more importantly, the CGI effects irremediably sucking). When I caught up with it on DVD, though, it struck me as hardly the disaster it had been made out to be. Though it failed in its obvious hopes to make Eric Bana a household name (he was last “seen,” if you want to call it that, as one of the few signs of life in Funny People, a.k.a. Judd Apatow’s attempt at becoming James L. Brooks), it did serve as a decent showcase for Bana’s considerable acting abilities, and had room enough for the increasingly bizarre Nick Nolte’s increasingly bizarre performance as Banner’s father.

Its massive flop at the box office seemed to doom any hopes of a new Hulk franchise, but then along came The Incredible Hulk in 2008, which pretended that the Bana/Lee version had never happened and offered us Edward Norton, of all people, as the not-so-jolly green giant. It barely did more box office than the ’03 attempt, and was overwhelmed by the massively successful first Iron Man of the same year, but somehow was judged a moderate success.

Still, Norton wasn’t going to move forward with the franchise—there were, after all, the inexplicable Leaves of Grass and generic cop thriller Stone to make—so the torch has passed to another seeming miscast, Mark Ruffalo, to take on the role in the forthcoming all-Marvel-all-star venture The Avengers. And on Friday came word that ABC is planning a new live-action TV version of The Incredible Hulk.

But none of this explains why. The Hulk’s metaphoric value, evident in the men Bat, Super, and Spider, doesn’t seem to extend anywhere beyond “If you piss the wrong guy off, prepare for some payback.” The camp value of the 70s show has mostly been absent from subsequent attempts; we’re here to be awed, not amused, by the Hulk. It’s of course always cool to see over-muscled guys tear things up, as generations of WWE fans will attest, but is that really all there is to it?

I told you: When it comes to the Hulk, I don’t get it. At least until someone can explain why “Hulk smash!” is such a good thing.