Why LA has it. 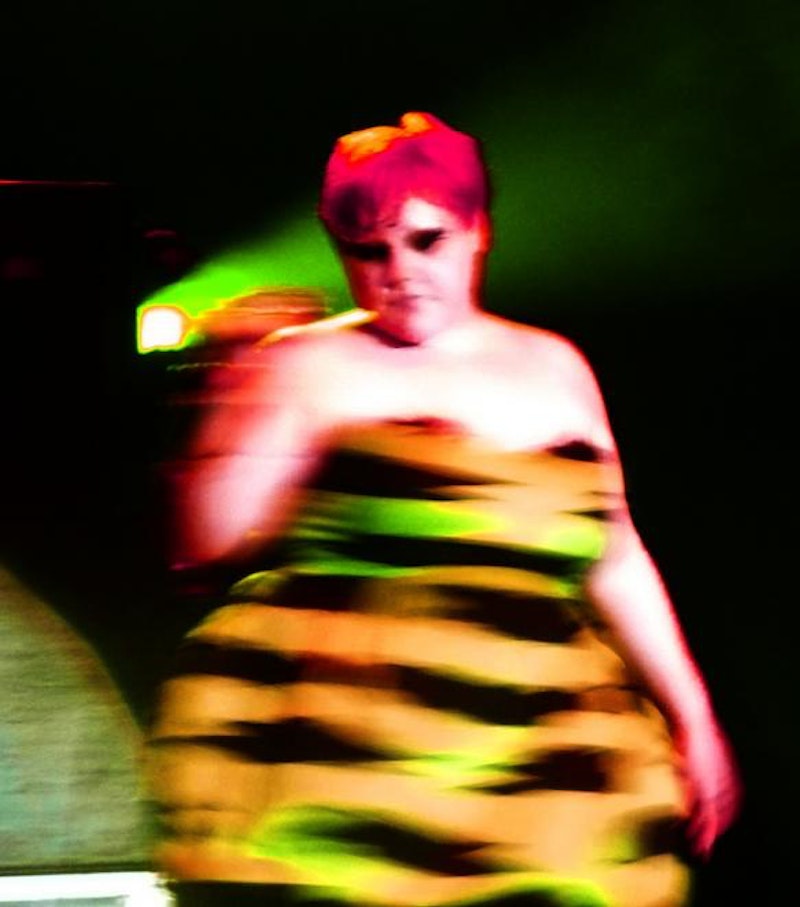 That night was probably the best night I’ve had. Forever. I’d been in Los Angeles for two and a half weeks already, but I got more bored with the place every day. I couldn’t stand the lack of centralization, the lack of clouds, way too expensive taxis, West Hollywood, the need for a car, the lack of street culture. That, and I missed New York. But then somebody plugged into the L.A. nightlife scene told me to check out this very Studio 54, polysexual fashion party called “Rhonda,” so I went and ended up getting asked to be in a music video!

217 Metro Local Line to Sunset. Get out. As I’m waiting I see my very first car accident right in front of the Rite Aid. Nobody died or anything, but their cars were jacked up. Wonder how many accidents occur in L.A. everyday (all those cars). After an eternity the bus finally rolls in, the 2/302 Metro Local Line to Downtown, and I’m on and it feels like a party bus. Feel like everybody in it is going to “Rhonda.” See a really cute hipster guy talking about Plato. Later I’ll see him at Rhonda.

When I get to the party it’s thumping and I start out on the dance floor but then I gradually move outdoors, where the cool people are, and I pick a spot on the stairs and stay put. People watch. After a while this dude (cute) approaches me and is like, Hey do you wanna be in a music video? And on the inside I’m rolling my eyes because this is L.A. and everybody wants to be in a music video, lives life like it’s a giant music video, so I tell him, Yeah sure! Why not? Sounds neat. He tells me it’s for The Gossip—one of my favorite bands ever—and I slightly freak out while maintaining my cool. I give him my number and email and he says he’ll contact me, but I don’t get my hopes up. This is L.A.

I get the call, am told where to be, when, and what to wear. So Tuesday morning I take the bus from my pad all the way to this industrial wasteland next to Downtown where I spend the next 16 hours with a handful of L.A. fabulous-scenti and The Gossip.

If you’re not familiar, The Gossip is an Arkansas-born, indie-disco, post-punk band that’s super duper gay. Beth Ditto, the lead bitch, is a full-out lesbian and she isn’t afraid to sing about it. On “Yr Mangled Heart,” from the album Live in Liverpool, Ditto opens by screaming: “This is for the faggots! The G-A-Y.  G-A-Y.” I loved their sound and edge before I even knew they were a bunch of queers.

The band has had somewhat of a makeover in the last few years, ever since they blew up in Europe. The Gossip started as a garage punk band and now have emerged with a crisper, more polished sound (thanks to joining Columbia Records), and Ditto has become a fabulous fashion plate and an image in her own right. The dress she’s wearing today is red velvet and has a bunch of keys and buttons on it, the hair a 60s up do. When I met her I was surprised at how down to earth and funny she was. I didn’t expect her to be a bitch, but I didn’t know she was so fucking hilarious. She can make the whole room shake with laughter. That’s star power.

The video we’re recording is for the band’s new single, “Men in Love” (gay!), and the whole thing was shot on a school bus. A party bus! I’m wearing coal on my eyes, red lipstick, a fucked up pink dress with a cranberry colored shirt underneath. Big platform shoes. No pants. I’m basically Lady Gaga. Everybody else looks equally as fucked up. One girl has her whole ass out. Together we all look like a bunch of gender-bending CBGB misfits. Eat your heart out, New York Dolls.

The theme of the video is a bunch of ravenous, fucked up party kids having a good time. We spray-painted. We made out with each other. We looked trashy. We danced. We threw food. And the video closes with a group of football dudes (all white) singing: “Na na na na / Men in love / Na na na na / Men in love / With each other.” If you haven’t heard the song, listen to it. Or just watch the video, which dropped last week.

I never knew that filming a three-minute video took so much work. There was a lot of manpower on set, and everybody in charge of a different task. The art department, the camera people, the directors, the band, the assistant directors, the coordinators and the make-up people. The 16 hours actually flew past, and the whole thing was kind of like hanging out with your friends, only everybody’s in costume, hair, and make up. Come to think of it, that’s how I live my life every day.

A lot of things happened that day. I made friends with a bunch of creative misfits. But most of all, the whole Rhonda + The Gossip filming experience basically washed out all the shit I talked about L.A. while I was there, and man I talked a lot of shit. Every phone call I had with somebody back East was about how much I hated L.A. When really all along I was just hungry for the creative scene, the underground and the left-of-center crowd. How ironic is it that the climax of my visit was getting entwined with the most creative crowd in L.A.?

Maybe L.A.’s not so bad after all.