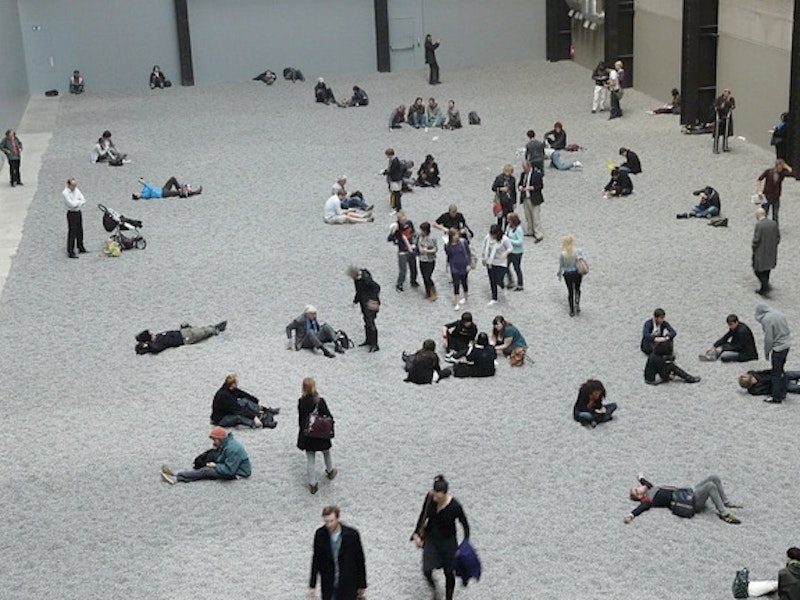 Ai Weiwei is sometimes touted as China’s “rebel artist.” In a country where anti-nationalist sentiments are punishable by god-knows-what, Weiwei seems to revel in being difficult. This is a guy who agreed to design Beijing’s Olympic Stadium just to publicly declare it an eyesore, which is an act that takes some kind of ultra-balls.

His 2006 work, World Map, is a gargantuan representation of the world’s continents constructed from 2000 layers of cloth, and which was intentionally designed to be difficult to install anywhere: a commentary on the cheap, exhaustive labor conditions in his native country, most specifically in the textile industry. Presumably, the significant trouble of keeping such an installation in one piece is also a reference to the impossibility of keeping his nation together under the current government.

Many of Weiwei’s other works also comment on collapse and mass production, but his most recent work is possibly the most exhaustive and literally labor intensive of all: 100 million handcrafted sunflower seeds made from porcelain, laid across the floor of the Tate Modern in London. The installation was designed to be an interactive one, with visitors making impressions on the sunflower seed patterns as they moved through the gallery space and experiencing, in their own way, the realities of mass production. Superficially, “I just walked that fake sunflower seed thing” sounds like something that pseudo-intelligent museumgoers would love to say to one another.

The Tate Modern closed off the exhibit this week, only a few days into its display, citing that the dust created by the constantly breaking porcelain seeds presented a health hazard to both patrons and staff. Visitors can no longer interact with the art, but can view it from a distance.

Is Weiwei a genius, or is he really ridiculously shortsighted? Did this experienced artist actually fail to consider the formal properties of his materials?

Let’s say that Weiwei didn’t really think about the porcelain dust being a hazard to the visitors. By the end of the exhibit’s run, it’s very likely that a majority of the miniature artworks would be crushed and rendered useless—nothing but a gray dust. Astute visitors would have gained a new appreciation for the materials they interact with, and one hopes their relationship with idea of ephemeral artwork would change, alongside their concepts of ownership. Things break. Even precious things that were created using the most antiquated and presumably valuable methods, break. Stop being wasteful, and start appreciating what goes into the things you consume.

Now, let’s say that Weiwei’s genius extends beyond these relatively simple conclusions. Let’s say that Weiwei knew that this porcelain dust would become a concern and potentially harm people—or at least make people believe that it was dangerous.

We can’t forget that Weiwei is concerned with the conditions of China’s factory workers, as well as the safety of its citizens. Maybe, just maybe, Weiwei knew that this was going to happen, and that the veracity of the unhealthy conditions that mass production often requires would make themselves genuinely apparent to the bourgeois, upper-class museum visitors. If an art installation about mass production had to be cordoned off, one can only image the atmosphere in a low-paying industrial factory. The audience’s forced detachment from the work becomes a metaphor for the chasm between the upper-class consumers and the lower-class producers.

Weiwei reacted in a manner that would suggest that this was all predicted well ahead of time: “Not interacting is a kind of interaction.” This suggests that everything is really going according to some kind of secret super-villain plan that Weiwei knew all along. When you make your own problems someone else’s problem, and force them to walk a mile in your shoes, or on your sunflower seeds, it’s a bit of invaluable perspective that can’t be communicated with any greater effectiveness.