What the Cool People Will Be Wearing on Halloween 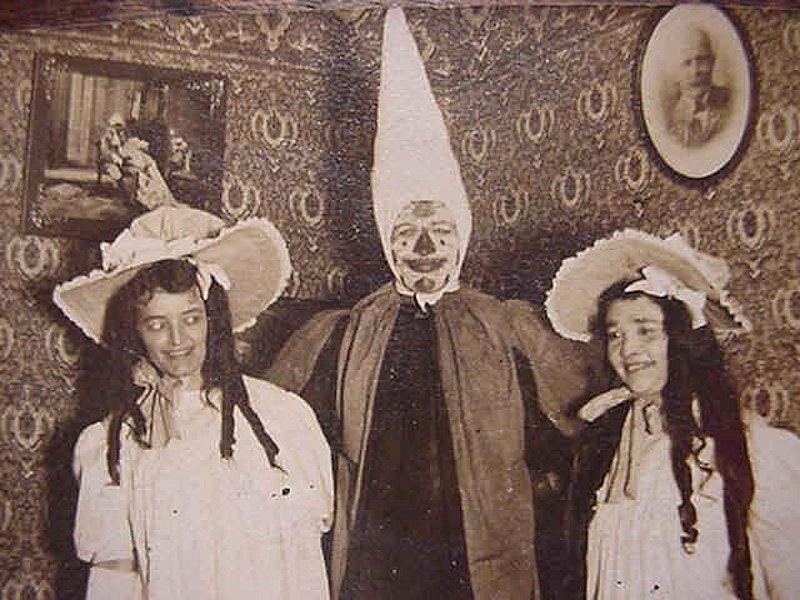 Living abroad, one of the things I really miss is Halloween. There are no jack-o-lanterns decorating the lawns or skeletons hanging from the porches in my neighborhood. Hell, most Japanese don't have a lawn or a porch. There are no construction paper bats taped to windows or fake cobwebs spread over the bushes. And although you can find lots of orange and black sweets in the candy aisle this time of year, no little kiddies will be knocking on my door come dusk on October 31.

And although the clubs here hold Halloween events, not many people are in costumes or make an effort to come up with a really clever one. Going to a big house party with your friends, with everyone trying to outdo one another, always seemed like the best part of the holiday for me. You'll always have a fair share of witches and ninjas, and of course slutty witches and zombie ninjas, but each year has its own trends, reflecting the things that have taken root in our collective psyche in the previous months. And each year has its own standouts, the really clever ideas that make you laugh or cringe in embarrassment.

Even if I don't have the competition that I used to, I still want to be one of those standouts, so each year about this time, from across the Pacific, I start looking for my Halloween costume and getting back in touch with my American culture.

The person on everyone's mind this year seems to be Lady Gaga, and why not? She dresses for Halloween every day. She has an official, licensed line of Halloween costumes this year, including her outfits from the “Telephone” and “Poker Face” videos and the getup she wore to the VMAs. There's also a lot of Bieber action, both emulating and emasculating, and you'll be seeing at least a few cast members from Jersey Shore at your party. Probably standing next to one of the Na'vi.

There will definitely be some Internet memes popping up too. The Double Rainbow guy deserves to be immortalized as a Halloween costume, which you could even make by repurposing last year's Hurley duds. Or you could just break out the puff paints and glitter and do what this guy did. With his simple black wife-beater and red bandana, Antoine Dobson is sure to make an appearance as well. If you are an African-American guy with chiseled abs, you may want to hit the party as the Old Spice Guy. The website knowyourmeme.com is suggesting several other ways to dress as your favorite memes if you are looking for more ideas. Epic Beard Guy, anyone?

But the best Halloween costumes are topical. Trends here show us what news stories really made an impact over the year and reference the issues that Americans really care about with a touch of black humor or dry wit. For 2010, a popular choice is modifying an old mechanic or mermaid costume with a splash of black paint to allude to the BP oil spill. The debate of medicinal marijuana is represented by a sexy nurse called Mary Jane. Pedophile priests, Christine O'Donnell as a witch and some dusty guys in hard hats and green jumpers doing their best Chilean accents are sure to be favorites among the last-minute crowd as well as the Barakula mask.

But my all-time favorite costume idea for this year? It's got to be AP writer Mike Bauman's suggestions for turning your youngster in to a Tea Partier, which included this gem:

Your child's sign should appear poorly executed and contain a message that is racist yet ungrammatical. "Theirs a reason it not called the Black House" is a good example.

If you prefer a positive message for your child's sign, I suggest "Sarah in 2012" or "Glenn Beck Makes Me Moist." Whatever the message, the sign will look most authentic if made by your youngest child or most intelligent pet.

I wonder if anyone in Japan would get it.