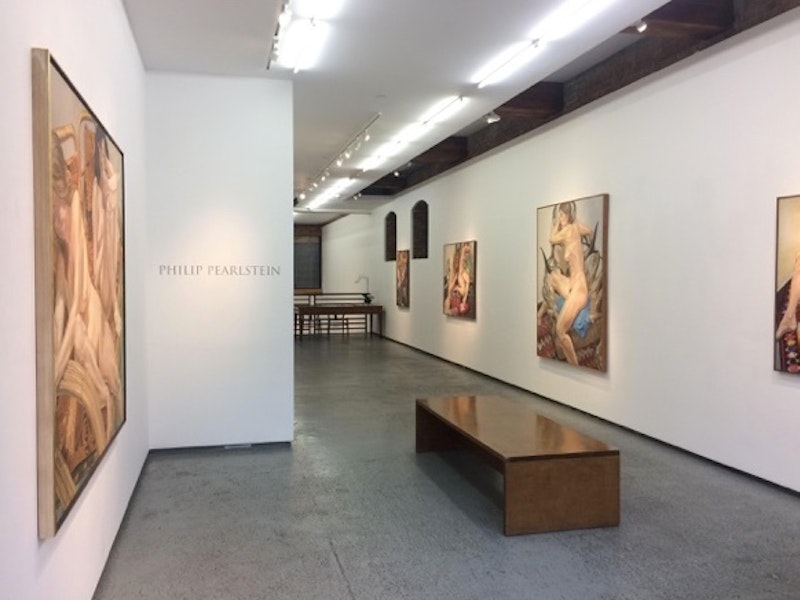 Philip Pearlstein’s current show at the Betty Cunningham gallery in Lower Manhattan comprises roughly a dozen large, softly-lit, evenly spaced depictions of sleepy women. They come accompanied by man-made objects, like furniture and textiles, and physical imperfections—tan lines, wrinkles and boney joints. The polarity between the models’ organic curves and the mechanical order of their accompaniment compete for a definition of “human.”

The overall palette is divided between the sterility of white skin under white lights and objects of rich color. The warmth of these objects finds resonance in the skin and I wonder if these paintings can be said to retain the same cold “objectivity” Pearlstein is known for.

Further inspection reveals that the a number of the paintings come with formal distortions after the manner of Picasso and lower levels of polish than might be expected from an artist with so consistent a style. Others glow with the unique effect of “objectivity” that made Pearlstein famous.

At the time of Pearlstein’s entry into the art world, abstractionists dominated painting. They were furthering a historical trajectory that sought to subtract images from art, leaving only the art. Pearlstein made it clear he was aiming for the opposite effect in his 1971 essay, “Why I Paint the Way I Do.” “I aspired to be non expressive, to remove my own gesture, handwriting, fancy brushwork from the process of painting,” he wrote, along with images used as “metaphors pretending to some allegory... sexual objects, or... vehicles for amateur psychological or philosophical statements.”

By abandoning the discipline’s associated flourishes, he put reality into his paintings rather than paintings into reality, much against his abstractionist colleagues. The artist hoped to achieve what he called “objectivity” in so doing.

The show’s press release tells us that not much has changed: “As seen in the paintings on view, Pearlstein remains sustained by a voracious hunger to paint exactly what is in front of him... adhering to the original premise of an abstracted realism that he set forth in 1971.” But disparities between older paintings on view and more recent ones cast the claim into doubt. Instead of the sleek, semi-photographic images for which the older paintings act as archetypes, the new paintings are more sketchily brushed and deal with the difficulties of picture-making through the stylistic solutions of early-20th century masters.

The stark contrast between the work exhibited and what its exhibitor says about it makes me wonder whether the press release was written by experts lacking an eye for detail or salespeople attempting to pass a new product off as its older, more notable works. Objectivity, which the artist values so highly, is missed in either case. Meanwhile, the mixture of masterworks from Pearlstein’s heyday with more recent paintings further brings into question whether we’re observing artistic progress or documents of a veteran’s eroding skill.

Nonetheless, the older paintings’ strange geometry and sparse narrative, the soft detail of a veiny foot or creased skin, offer the traditional experience that made Pearlstein famous: one in which human beings are “facts.” In their presentation as such, we’re offered another opportunity to separate our experience of people from what we feel about them, which is all that objectivity ever meant to do.