There’s more here than the genders. 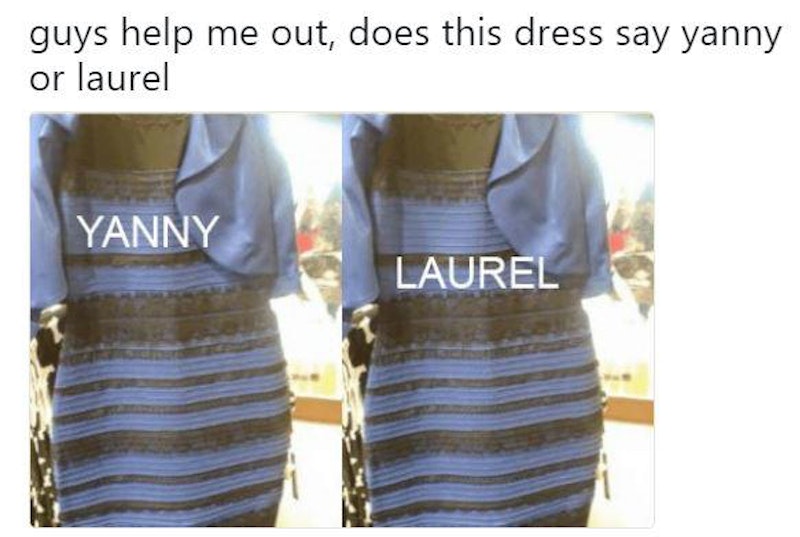 The Internet is divided again. Not long ago, it was #TheDress, a slinky, patterned, white and gold dress. I mean, a blue and black dress. Or, no, wait...

There isn't a right answer. "What color, really, was that dress?" isn't even the right question. What matters is why #TheDress happened at all. It wasn't the first photograph in history to be ambiguously colored—it was merely the first such photo to go viral. It became a cultural phenomenon because, like all viral phenomena, it served a cultural purpose. It brought to the viewer's attention a growing inability, within Western society, to agree on basic facts.

The "black" and "white" parts of the dress didn't overlap, but those two colors had to be there for images of #TheDress to turn contagious. Side by side, black and white are our symbols of opposition, of ideologies at war. What was so uncannily resonant about #TheDress was there was no middle ground, and no real debate to be had; instead, the viewer was carried off at once to a polarized extreme. Second looks at the real dress were bummers, and didn't catch on: the point was not to find out which side was right, but to marvel that everyone was equally biased and therefore equally wrong.

Newspapers and magazines sought out experts in photography, cognition, fashion, and the visible spectrum, quoting them to the effect that perceptions can differ—precisely what was most obvious to everyone. This allowed the media to advertise its sensitivity to all viewpoints, its up-to-the-minute cultural savoir faire, and above all, its willingness to turn a popular schism into undigested coverage.

Reporting on #TheDress was a rehearsal for the "post-factual" media; it anticipated the media's obsession with the "reasoning" of Trump supporters, and its now-dominant practice of taking political statements—Trump's included—at face value. In our information economy, if you and enough other people believe it, then it's news. Opinions "become content," as one headline recently claimed. This transmutation smothers the other, opposite practice of reporting: that is, finding sources of objective information, and making those the news.

There is light, however, at the end of the tunnel. That’s Yanny and Laurel. Like #TheDress, with all its attending suggestions of dishonest Photoshop, "Yanny or Laurel" is a distorted, almost unintelligible snippet of somebody's recorded voice. There is no hope of recovering the original here, though. This isn't a photograph with a filter on it, but a bit of accidental engineering. Predictably, experts have begun arriving in droves, ready to separate the signal from the noise ("Yanny or Laurel? We Ask The Experts") and to aver that, believe it or not, different people really can hear the same sounds differently. The difference this time is that it doesn't matter which side you're on.

Regardless of whether you hear "Yanny" or "Laurel," you're hearing a name. Not just any name, either, because this is a name without a clear gender. "Yanny" is perhaps slightly more masculine than "Laurel," but it's debatable. Even if they are differently gendered, the confusion between them ends up making both androgynous. Since there's no embarrassing truth out there to distort, the sound file has already been re-engineered. Some of the Yanny/Laurel pages that have sprouted up enable you to choose: select Option A to hear "Yanny." Select Option B to hear "Laurel." In other words, you as the listener voluntarily identify with one of the two possibilities.

There's more here than gender. The mesmerizing thing about #TheDress was that seeing it one way or the other wasn't supposed to be a choice. You were drawn, willy-nilly, into an absolute conflict of black versus white. Repeat the same trick over, however, and the result is more playful and inclusive. Picking your side is a game, so in order to play, nobody admits that the "answer" cannot be determined. You loop the audio file, actively listening for the other name, almost disappointed if you don't hear any little bit of it.

The Air Force has just apologized for a tweet "made in poor taste" about Yanny and Laurel, which read as follows: "The Taliban Forces in Farah city #Afghanistan would much rather have heard #Yanny or #Laurel than the deafening #BRRRT they got courtesy of our #A10." In this case, however, somebody's desperate attempt to make a relevant joke let out more truth, much more, than the author intended. The A-10 is an attack jet with 30mm cannons; "Yanny or Laurel" is the all-clear signal, a sound synonymous here with peace, and the luxuries of attention that peace affords. We don't grant the Taliban a full share of humanity; we give 'em deafening hell instead. There's no helping that. But listening to "Yanny" or "Laurel" is the other, better possibility. It's the game that bespeaks peace, regardless of the name you hear, or choose.