A “Not Guilty” Plea For 13 Reasons Why 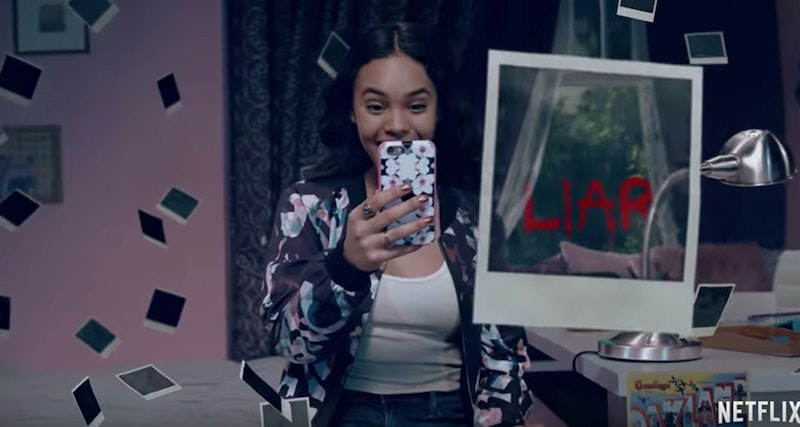 Last week, a writer at Splice Today aired a public complaint about 13 Reasons Why. "From the opening of the first episode," writes Brian Brewington, "I couldn't get past this young girl's inflated sense of self-importance and lack of accountability... The entire charade is narcissistic." Brewington is not a fan of Hannah Baker.

He's also concerned about what the show may trigger. "I felt this was going to put a really bad idea into the heads of a lot of school kids.... the show does nothing but provide bad ideas to vulnerable teens who've unfortunately suffered something similar."

In other words, by the time you've saved up enough money to buy a weapon of mass destruction from an Australian arms dealer, you've entered a whole new demographic. The patience, prudence, and horse sense it takes to accumulate such wealth tends to winnow out people dedicated exclusively to doing something vicious and crazy. That is Jefferies' theory, at least.

I could say the same about suicide. Hannah Baker is not a danger to society. There will be no copycats. When Goethe published The Sorrows of Young Werther, he actually did inspire a wave of suicides, but that was pretty understandable, because all the young Goethe fans had to do was shoot themselves in the head. If, however, you're so vain you think 13 Reasons Why is about you, then you’ve got a long and tricky slog ahead. There’s the matter of writing and recording your complex, interwoven narratives, all of which need killer plot arcs and reveals. You will have to use outdated technology at every turn. There’s a serious risk of something either sounding silly, going to the wrong people, or otherwise getting screwed up, which would really be a shame, because you will have gone and died for nothing.

In other words, if you're the kind of DIY genius who can pull off mind-bending feats of postal terrorism and turn your mundane life into podcast performance art, you're probably not going to kill yourself. You're probably class valedictorian, editor of your school's creative writing journal, and about to spend a year off in Iceland studying music theory with Björk. I don't know if you’ve read Kurt Cobain's suicide note, but I have, and it has no polish whatsoever. Cobain was a craftsman when it came to playing music; when he sat down to write his suicide note, he was just an open wound. His note is a clumsy and sentimental half-apology for the terrible thing Cobain was about to do.

Really, the only world where Hannah Baker could live and die with such panache is the world of fiction. Her high concept suicide is pure fantasy; those of us in the show's queasy audience are left to ask, I suppose, to what uses the fantasy will be put.

It's cathartic, there’s no question about that. This is the most elaborate and satisfying revenge plot since The Count of Monte Cristo, and there isn't a high schooler alive who doesn't understand the appeal of doing what Baker did, namely making those bastards (whoever they are) admit what they've done and pay for it. Baker's inflated sense of self-importance is aesthetically justified. She thinks she's an awfully big deal, but her tapes prove that she is one. True, her one-sided insistence on a single version of events leaves her accountable to nobody. On the other hand, she's dead. I’d argue that she's already paid her share of the bill.

On a deeper level, the show is about the complicated, often unacknowledged roles we play in each other's lives. What are the ripples that follow the demise of a friendship? What does a suicide mean to a high school student who thinks he "didn't know" the dead girl all that well? Like its (better written) cousin, Hamlet, 13 Reasons Why dramatizes the morbid attraction that the past and the dead have, for the living, in the present. It explores just how much sway these ghosts and shadows should be granted.

At the same time, the show has begun to participate in a very distasteful brand of marketing by fanning the flames of controversy. Just consider the (supposedly well-intentioned) disclaimers that now air at the beginning of each episode. The show, we are told, tackles "tough, real world issues." That it does, as I've shown, but the issues are philosophical in nature. The pathologies that animate the plot—substance abuse and sexual assault among them—are just patently bad things to do. Contra the disclaimer, there are no brave "conversations" to be had about these things on the sole basis that they appeared in the show. To think otherwise would be like suggesting that, after viewing an episode of House M.D., everyone in the audience should get together to discuss whether or not cancer is bad, and whether actual people come down with it.

The risk here is buying into a distorted sliding scale that ranks some shows as somehow more "real" and virulent than others. The criteria vary. It may be the "issues" in play, the supposed age of the people watching, or the extent to which a show depicts virtue punished and vice rewarded. Regardless, the point is always to scare us about the nasty dust-up that's going to occur when this or that show's fictions crash into our reality.

Meanwhile, among the teenagers that I know, the hottest show on Netflix is not 13 Reasons Why. It's the sci-fi nightmare Black Mirror, which is absolutely crammed with terrible ideas that nobody should ever try at home, including a murder/suicide combo. The show is twisted and utterly uncontroversial. Nobody worries about it, perhaps because the showrunners never filmed a disclaimer. Teenagers like Black Mirror, and 13 Reasons Why, because the characters do all kinds of nasty things that wouldn't even work on a practical level in real life. "Wouldn't it be terrible if all this somehow came to pass?" Terrible, and also... extremely entertaining? The answer, in both cases, is yes.

Consider what this means for all of us currently scheduling a full series of dreadfully earnest "conversations" about 13 Reasons Why. It means that young people are watching the show because of how unreal it is, except on the level of feeling and fantasy. The more unhinged it gets, in fact, the more delightful it becomes.

That's potentially frightening to our unwashed legions of armchair TV critics. Deep down, we're still looking for moral leadership from television shows. We still want to believe they are the models our teenagers will use in deciding how to live. What if the opposite is true? What if our teenagers feel rather confident about their life choices, and therefore have the leisure for purely speculative shows like 13 Reasons Why?

My conclusion: this could be good news. I'm serious. It means that teenagers aren't combing their favorite media for role models. Thank God for that. Ironically, the breakthrough success of Netflix's most amoral offerings proves that Millennials aren't looking to be the copycats of anyone at all.