A view from the neighborhood where Wonder Woman 2 is being filmed. 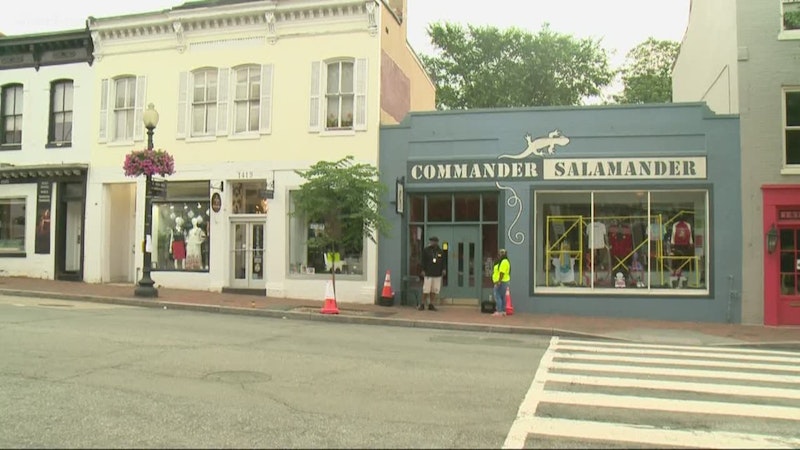 They need to show Henry Rollins meeting Wino. That was my thought as I watched a scene from Wonder Woman 2 being shot in Georgetown. Like everything else these days, the film is set in the 1980s—1984 to be exact. I lived in Georgetown in the mid-1980s when I was in college, and wanted to see how Hollywood was depicting my old playground.

Like a lot of 80s revivalism, the crew for WW2 had the kitsch down. The production crew resurrected Commander Salamander, the New Wave store that once stood in Georgetown. There were vintage cars with DC license plates. The scene they were filming took place inside the store, and three young female actors kept running out the front door over and over, like they were excited. No sign of Gal Gadot.

A mainstream Hollywood tentpole movie isn’t going to be too edgy or artsy, and doesn’t have to be—the first Wonder Woman was fun, the kind people go to the movies for. And yet, as I watched the girls running out of Commander Salamander, I hoped WW director Patty Jenkins would put in some real 80s cool, not the usually tacky day-glo stuff, into the film. Like the Bayou, the music venue where I was a waiter and saw the Ramones, ’Til Tuesday, Southside Johnny and other great bands. Or the great punk record store Orpheus.

Or Henry Rollins meeting Wino. It’s one of my favorite tales about 1980s D.C., and it happened in Georgetown. As he recounts in a documentary about the doom metal band The Obsessed, in the 80s Rollins was the singer for the punk band Black Flag and worked at the Haagen Dazs in Georgetown. One night after his shift he crossed the street, only to find on the other side a scary-looking longhaired metalhead. His name was Scott “Wino” Weinrich, and he was the leader of the band The Obsessed. (He was also my old next-door neighbor). In those days when punk met metal there was sure to be some shit, and Rollins, with his shaved head and Black Flag pins, braced himself for combat. Instead, Wino complimented him on his Black Flag pins. The two parted friends and the Obsessed were the only metal band who was accepted into the punk scene.

That was D.C. in the 1980s. It was also Trouble Funk, Chuck Brown, the New Wave club Poseurs, the Redskins, great book stores, the Bad Brains, and plenty of cocaine. Right on the corner across from where they were filming was the casual French restaurant Au Pied du Cochon where I wound walk down from my small group house to meet my girlfriend for a late-night snack. We’d stay up all night and wait for the Sunday Washington Post to be delivered. It’s now a Five Guys.

Occasionally a film would shoot in D.C. in those days, usually in Georgetown, movies like St. Elmo’s Fire and the forgotten Mr. T vehicle D.C. Cab. My brother and his roommate were struggling actors and got to be extras. Watching all these people in 2018 with 1980s clothes walking down Wisconsin Ave. was a flashback.

It felt kind of sad. As I’ve written before, the 80s was a time of forward-thinking in the arts, from books and movies to music. When we had parties at our house the music was The Smiths, Run-DMC and New Order, not the Grateful Dead. There was a big 1960s hangover from the Baby Boomers, but my friends and I wanted no part of that. That Petrol Emotion was playing at the (original) 9:30 Club, or there would be Go-Go at the Ibex Club, or a new Cure record listening party at Poseurs.

Now in 2018, it’s quiet on the set. I watch the three young actresses escape Commander Salamander. The production assistants keep moving us further and further back down the street. Gal Gadot won’t be there today.