A Little Truth About Leonard Nimoy

Let’s look at some documents. 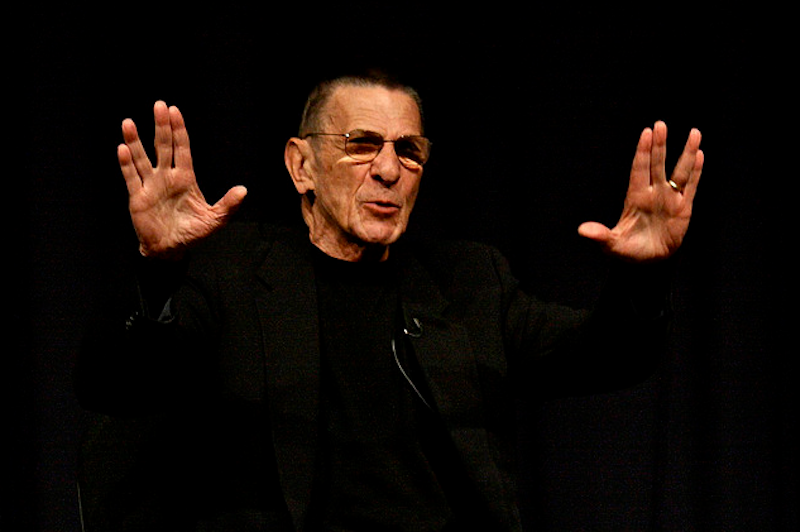 Leonard Nimoy’s been dead more than a year. Many good things were said about him when he died. Here’s something that’s bad, at least a bit, and it’s been written out of Star Trek history. But I visited the Gene Roddenberry Star Trek Collection at UCLA, and there I found documents from Nimoy’s very stormy contract re-negotiation with Desilu Studios, the maker of Star Trek. They indicate that Nimoy took the lead in the negotiations, that he wanted to direct, and that his attitude rocked the studio back on its heels.

“He was very arrogant in indicating that being an actor was not the only employment or source of income available to him in his life span,” wrote Ed Perlstein, Desilu’s vice president of business affairs, in a memo to Herb Solow, vice president for programs. “I told him that if we sought the recourse of SAG [Screen Actors Guild] in suspending him permanently for willful disregard of his contract, he would never be able to work again as an actor. Leonard again indicated that he would take that chance.”

Perlstein spoke with Nimoy on March 30, 1967, and wrote the memo on March 31. Maybe he waited a day to cool off. But on the same day that he talked with Nimoy, he also talked with Nimoy’s agent, Alex Brewis. The memo on that conversation he did straight away. “Usually I am a very peaceful and serene man but I must tell you that I told Alex off at each request and not only do I think that Leonard is sick but I think we can include Alex and Leonard’s business manager in this observation as well,” Perlstein wrote, again to Solow. Going by “we can include,” it looks like Perlstein was already steamed at Nimoy and now added the two others. (UCLA doesn’t allow photographing or photocopying of documents, so all these quotations are from my notes, which I wrote out by hand while reading the memos. I stand by their accuracy, including the occasional absence of commas.)

My notes contain two sets of demands put forth by the actor: 10 listed in a March 20 memo by Perlstein, and then 11 listed in Perlstein’s March 30 memo about his frustration with Nimoy and crew. The demands were ambitious, but they also showed attention to Nimoy’s workaday needs. For example, each time around Nimoy wanted to direct episodes, and each time he wanted the right to do voiceover work for commercials.

These two lists of demands aren’t mentioned by Inside Star Trek: The Real Story, the only book written about the old Star Trek by people on the production side. Its authors are Robert Justman, the show’s associate producer, and Herb Solow, the man that Ed Perlstein had written the memos to. Inside, written 30 years after the contract standoff, says that Nimoy and Brewis had set out for a simple raise to $2500 per episode. But then, the book says, Brewis misheard a phone conversation and thought the studio was giving a combined $11,000 per episode to Martin Landau and Barbara Bain at Mission: Impossible.

“He became incensed,” Solow wrote. “‘If they’re worth $11,000, then my client, Leonard Nimoy, is worth at least $9,000.’” Maddened by the supposed Landau-Bain offer, the agent also tacked on demands for “star billing, star perks, a larger percentage of merchandising money and greater script input” (in Solow’s words). Nimoy’s part in this? “Years later, Leonard laughed, remembering that when he heard how Brewis had ‘improved’ his demands from $2,500 to $9,000, he ‘almost had a heart attack.’”

That version of events doesn’t survive the documents I found. In fact, it barely survives Inside Star Trek. The book says Nimoy “not only enjoyed but found it necessary to be involved in all negotiations,” and it includes the April 6, 1967, letter in which Nimoy told the Desilu business v.p. that he wouldn’t show up for work. “I believe my reasons for this position were clearly stated in our telephone conversation of Thursday March 30,” Nimoy wrote. The book doesn’t address why somebody being shanghaied by his agent would then become point man in pressing the agent’s crazy demands.

Nor did any figure like $9,000 show up in the demands listed by Perlstein’s memos. The first time around Nimoy wanted $4,500 per show for the upcoming season, then an additional $500 with each season after that. The second time Nimoy came down to $3,750 for the upcoming season. From there the deal was just as rich as its previous version, but not nearly as rich as Solow describes.

At any rate, Nimoy wasn’t hijacked by his agent. He was somebody who pushed, not somebody who got dragged along. In his autobiography, he describes forcing a rewrite of an early Trek episode because Spock wasn’t shown to advantage. The result was the scene in “The Naked Time” where the character undergoes a near-breakdown; this moment was the first to show the painful split between Spock’s Vulcan dignity and human emotions, and Nimoy made it happen. Producers and executives sometimes found him difficult. But he went from wanting to direct Star Trek episodes to actually directing Star Trek feature-length blockbusters, and the movies weren’t half bad. He had goals and could stick his neck out, and we might as well know it.