Thrash Skate at the Roller Rink

What R.F. taught me. 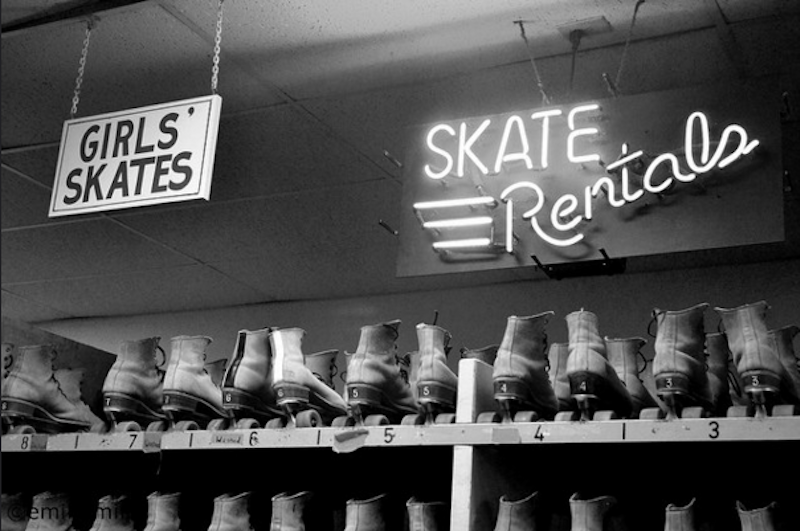 By 1988, it had already been a year or two since my close friend/middle school class mate R.F. started hanging out with the metal heads at Skateland. This was no skate park; no skate boarders or punks were found there. This was Towson, MD's Orchard Skateland roller rink—a nexus of 80s teenage coolness hidden in the back lot of a suburban industrial park.

At first I paid no attention to R.F.'s social life outside of our town since we had plenty to do right in our own neighborhood. He lived only a few houses away from me in a semi-suburban developement where lots of our friends and neighbors had pools, big backyards, and farms. Plus all of our homes were nestled in between tracts of public forest and the grounds of a local nature preserve, all of which were connected by a complex network of trails, creeks, and streams that formed a perfect place for outdoor adventure.

While the woods held plenty of intrigue, as we all began to come of age the sylvan wonders were nothing compared to the seductive pageantry of 1980s youth subculture. R.F. was the first kid in the neighborhood crew to be swept up in the social scene. In particular, R.F. took a shine to the odd convergence of aggressive machismo and mythical theatrics that defined heavy metal music fandom. While the underground worlds of crust punk and hardcore were slugging it out in the clandestine DIY performance spaces of the inner city, metal ruled the social lives of disenfranchised kids in many of Reagan era America's blue collar factory towns and upper middle class enclaves.

My early knowledge of heavy metal mainly came from watching 80s music video shows on TV and listening to classic rock stations playing the metal hits created by what most music fans would now call "stoner metal" acts: Black Sabbath, Blue Cheer, Led Zeppelin, Cream, Deep Purple, Heart, etc., but I was also aware of contemporary glam metal acts like Motley Crue, Poison, Warrant, and other such groups who were obsessed with a carefully calculated equation of hedonism, cross dressing, and intense hair care. R.F., on the other hand, preferred speed metal and thrash.

The differences between speed metal and and thrash are kinda like those of oranges and lemons: according to the metal heads I knew in the 80s, thrash was punk rock with heavy metal influence (i.e., Suicidal Tendencies, Corrosion of Conformity, Slayer) while speed metal was heavy metal with a punk influence (i.e., Anthrax, Exodus, early Metallica, Motorhead). In either case, both genres spawned a mutual cult fan base whose fashion sense and philosophical attitudes naturally reflected a mix of punk's rebellious caricature and metal's high concept narccicism. Long, luxurious hair? Check. Ripped denim? Check. Post-apocalyptic barbarian/bondage gear? Check. Politically incorrect shock value humor? Hell, yeah! Men wearing women's clothes, make up, and hair spray? Hell, no! But for the lady head bangers teased quiffs, Etta James-worthy eyeliner, and mounds of foundation were prerequisite.

R.F.'s interest in thrash/speed metal was sparked by the metal kids he'd befriended at Skateland. To this day I have no definitive understanding of why those metal heads were so interested in roller skating, a past time that was less than 10 years away from being an essential part of the 1970s disco movement, and disco certainly enjoyed no rennaisance during the 80s. In retrospect, the nihilistic image associated with the metal heads and punks was in fact just that: a plastic image, a commercial fad created for and by people with spare time and disposable income, so maybe it had more than a thing or two in common with roller skating.

Because my primitive teenage brain never fully got this, I usually stayed away from Skateland because it seemed confusing and contradictory. At age 14, I was just too insecure and self consciously rebellious to take a chance on frequenting a "mainstream" place like a roller rink, and, more importantly, roller skating has never been one of my strong points. Nonetheless, every once in a while R.F. would invite me along and every once in a while I'd accept the invitation, ever curious yet baffled by the fact that his Hessian metal crew could find a common ground where graceful roller queen pirouettes could coexist with a sound system blaring Metallica lyrics like, "No remorse, no repent... another day, another death, another sorrow, another breath!"

My time at Skateland was spent awkwardly socializing, counting the seconds til R.F.'s folks came to pick us up, and unsuccessfully struggling to roller skate without hugging the walls of the rink. In between these embarassing and boring rituals of youth, I perchanced to witness the amazing, all powerful, immortal spectacle known as Thrash Skate.

In case the roller rink has never been an important part of your life, let's clear something up here: one of the common traditions at a roller rink is the themed portion of each night where the roller rink disc jockey would come on the PA system and announce something like,"Okay, it's for time couples-only skate" or "families only-skate" or "trick-skate" (this being an instance where the floor was reserved for freestylers who'd often do crazy stunts, human pyramids, juggling, and other daredevil acts while skating); I'm pretty sure the beloved Soul Train line was even incorporated into a themed skate session, and each themed session usually lasted for about 10 minutes.

Orchard Skateland may have had the most unique themed skate session of all with Thrash Skate. The heavy metal head bangers were such a massive weekend presence at Skateland that the rink DJ prepared a special segment each friday night where he'd play high speed thrash/metal music, thus signaling Skateland's most outrageous patrons to band together in a hair-flailing, throat-shredding, "wall of death"-cum-mobile scream-along.

"Alriiiighht everybody! All you headbangers get out on the floor! You know what time it is, it's time for THRASH SKATE!!!"

The DJ's voice resounded through gargantuan speakers containing all the nuance of a monster truck rally. A squad of 20 or 30 young adults and adolescents clad in mangled clothes, shiny metal spikes, and plumes of glorious, flowing, gleaming hair zoomed out onto the smooth, freshly waxed hard wood floor. The only thing louder than the roar of the crew's accelerating wheels was the ear splitting cuts played by the DJ.

It was perhaps the first time I had ever seen people socializing publicly with such reckless, ecstatic joy, spinning around and around in a perfect line, arms linked, all looking like nothing less than a cross between the Radio City Rockettes and the young cast of the 1979 film Over The Edge,  all shouting in unison to their favorite ultra-violent songs while laughing and smiling in a weird yet breathtaking tribute to the camaraderie fostered by their abiding love for metal's imaginary barbarism.