The Amnesiac Nazism of Captain America 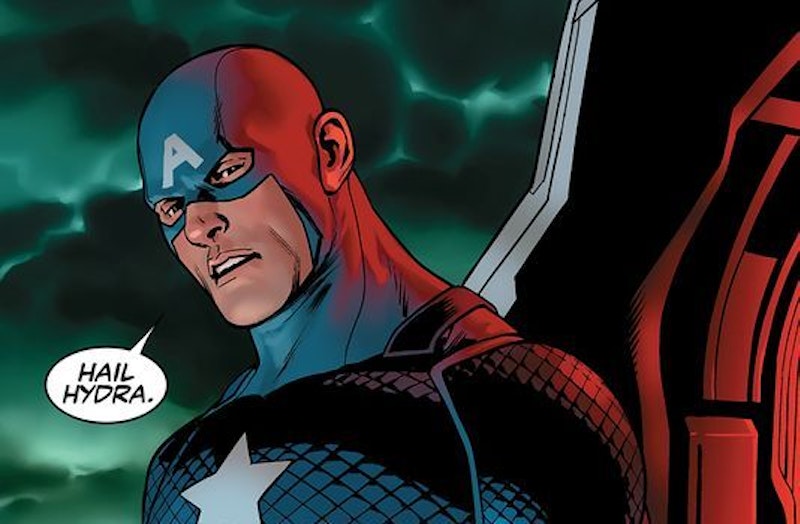 Superhero comics exist to disappoint, and Captain America: Steve Rogers #2 is no exception to the rule. The first issue ended with a cliffhanger that received national media attention: Captain America, it turned out, was and had always been an agent of Hydra; the greatest American was a Nazi. Fans were horrified. In issue #2, writer Nick Spencer and artist Jesus Saiz take it all back; Captain America isn't really a Nazi. Marvel was just fucking with you. Psych!

Admittedly, there's something satisfyingly cynical about the reversal. The plot is preposterous: Captain America was turned into an agent of the pseudo-Nazi organization Hydra by a fickle child with cosmic powers who’s fallen under the sway of the evil Red Skull. But it’s a deliberate provocation. The cosmic-powered kid in question explains, "I live fixing people—making them Hydra makes them better than ever." Spencer couldn't say it any more clearly; he made Captain America into a Nazi because it was childish fun. Writers can do anything they want, so Spencer just rewrote Cap to provide a shocking twist ending. And then, to twist the knife, the actual plot of the book is, "Some character decides to rewrite the world to provide a shocking twist ending that she can chortle over."

The meta-dumbness here is quintessential superhero comics. The two big publishers, Marvel and DC, have been using the same characters for decades, rebooting and reconfiguring the narratives so often that the continuities at this point are a bloated bolus of bullshit. Recently Captain America got turned old; then the guy who used to be the Falcon took over the costume, then they abandoned that and Steve Rogers is Cap again just in time to get turned into a Nazi. I remember 30 years or so ago Captain America was blind for a while; then he had to abandon the costume because some uber patriot bad guy had it. Probably Cap was a frog at some point—or maybe that was Thor. Who cares? The point is, comic book writers are always trying to do something daring that changes everything without actually changing anything. Captain-America-Is-A-Nazi-For-a-Hot-Minute is in line with a history in which desperate writers with limited talent try to tell transformative stories about characters who aren't allowed to change.

It's gross to handle a topic as serious as fascism in this manner. If you’re a hack, embrace it, and stick to writing stories about monsters hitting each other. Still, the failure is instructive. Captain America lives in a world where the past is constantly being erased; he can be anti-Nazi and Nazi and anti-Nazi and frog because superhero comics deliberately erase their own past.

Cap exists in an eternal now, in which everything that happened before is just a convenient arbitrary fiction, re-jiggered in light of whatever the current plot requires. Captain America comics often reference World War II, but at the same time, the comic doesn't care about history. It cares only about the next adventure. Nazism is just a meaningless plot twist, because Nazism never really existed. Nothing ever really existed.

Superhero creators complain their work is stereotyped as shallow and vapid, but what else is there to say about a genre that demands an amnesiac reset every couple of years, or sometimes every issue? You could get an interesting storyline about Cap embracing fascism perhaps; that might be timely at this moment in American history. But instead, his error of judgment is simply erased; it was never his fault, and indeed, never really happened. And so Cap keeps chugging forward, thumping bad guys, a hero who (rather like America) never has to reckon with what he's done, and whose virtue is therefore secure.