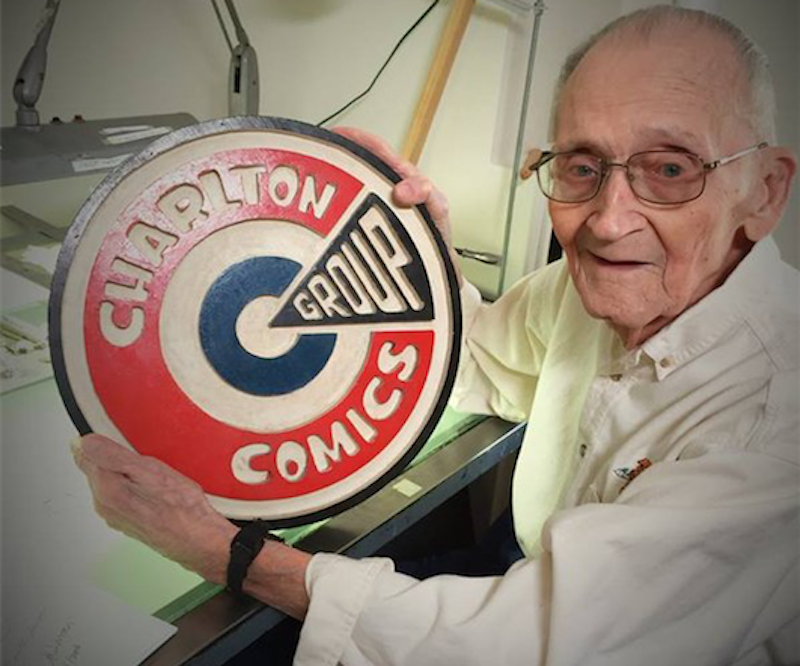 There will never be another visionary like George Wildman. Wildman passed away on May 22 at the age of 88 leaving behind an influential resume that places him high in the pantheon of comicdom's most iconic pros. His outstanding achievement was a lengthy stint in the 70s and 80s as executive editor of comic books for the fly-by-night indie Charlton Publications. The comics created under Wildman's guidance were beacons of phantasmagoric splendor when stacked up next to the mainstream comic industry's predictable super hero product.

Before blowing minds with a line of twisted comic books, the lifelong Connecticut resident served in World War II and Korea before starting his professional career as a graphic designer for an advertising agency that he owned and ran out of his home in Hamden. To supplement his income as an ad man, Wildman—an avid comics fan—also began taking freelance cartoon jobs from Charlton, then an obscure publisher of periodicals based only a few miles away in the small town of Derby. Wildman made fast friends with Charlton's staff, which at the time included a young Dick Giordano. Shortly after becoming the editor for Charlton's comic line, the rival pubisher DC Comics gave Dick Giordano "an offer he couldn't refuse" and all of a sudden an editorial spot was open. Wildman stepped up to take Giordano's place, but only accepted the job under the condition that he could also work as the artist for his favorite comic book: Popeye, the King Features newspaper strip which Charlton had licensed shortly before Wildman took the editorial reins.

George Wildman's experience as a graphic designer illuminated his new approach to promoting, editing, and even shipping out the 70,000,000 print run of comics that bore the bold Charlton bullseye logo, a logo designed by Wildman and one that gave the company its first distinctive trademark. Tractor trailers bearing the Charlton bullseye and a gang of wacky cartoon characters could be seen roaring down highways throughout the East Coast and Midwest during the heyday of Wildman's tenure. Whenever a new shipment of Charlton craziness blazed into town, the zealous editor was often hot on the trail, setting up promotional appearances through local media and visiting the children's ward at hospitals to give out comic books and impromptu sketches of Popeye.

Wildman was also unique for his steadfast dedication to eschewing super hero comics in favor of publishing titles that showcased less prevalent styles: tripped out supernatural, and mystical romance, as well as warped takes on war, westerns, sci-fi, humor, martial arts, experimental crossovers (i.e., Haunted Love, Atomic Mouse, Vengeance Squad, the humor/sci-fi/super hero hybrid E-Man), and anomalies like Charlton Bullseye, possibly the first widely distributed comic to feature work by unpaid amateur artists including some who were as young as 16.

Not only did Wildman bypass the super hero schtick, but he even encouraged a subversion of comics' typicaly serialized narrative style for the anthology format. The scripts found in these books were so low on conventional literary devices that much of their content veered dangerously close to the absurd, thus giving the company's eccentric freelance artists plenty of room to employ an outrageous visual storytelling sensibilty rarely seen in any of the competition's output.

The freelancers who worked under George Wildman generally described him as a hands-off editor who gave them plenty of artistic elbow room. Creators like the late Don Newton (by day a full time high school teacher), Peter Morisi a.k.a. "PAM" (by day a New York City cop), Joe Gill, Nicola Cuti (a writer and the assistant editor at Charlton during the 70s), the late Tom Sutton, and colorists Helen Popowski and Wendy Fiore all burned the midnight oil churning out mountains of brilliant work for Charlton for little pay.

Their collective loyalty to the company was impressive enough, but the biggest name to unleash a torrent of wild fantasy classics under the Charlton banner was none other than Steve Ditko, the co-creator of Spider Man, Doctor Strange, and an early architect of the highly commercial Marvel style. Despite his massive success with Marvel Comics, by the mid 60s Ditko was burned out on the industry giant's factory line atmosphere, so he began taking more freelance work. His connection to Charlton was so strong that he ended up being one of the few artists to consistently create original work for the publisher all the way up until their comic line's 1986 shutdown.

The spirit of George Wildman's "anything goes" approach lives on in the work of today's small press graphic designers and cartoonists. The bizarre work created at Charlton under Wildman came out at a time when many editors began to wholeheartedly accept the homogenous aesthetics that have defined most serialized comics from the 80s to the present. Indifferent to these common industry tropes and fads until the end, to quote Comic Book Artist's Jon B. Cooke, Charlton's legacy is that of,"...the loveable underdogs of comicdom, trying harder, taking chances, and having fun doing it." With a top dog like George Wildman, that's all that anyone could do.

—More about the Charlton documentary here.