A Lifetime of Anti-Valentines 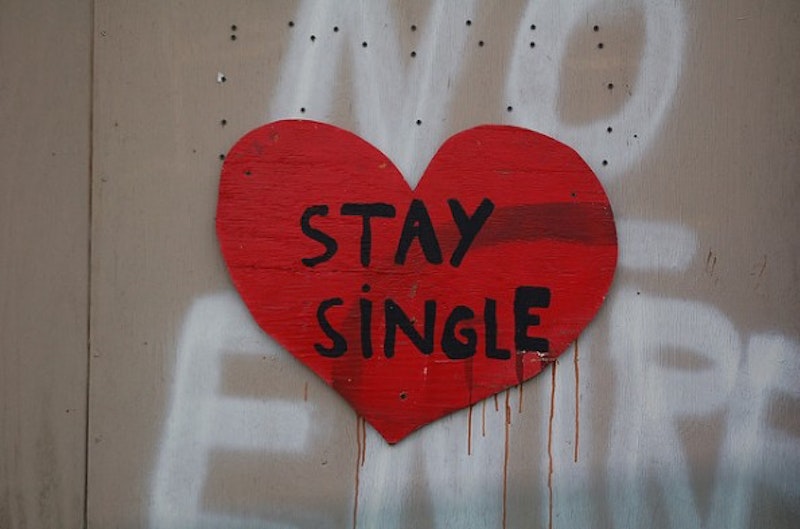 In first grade at St. John’s Catholic School, I took interest in an unruly kid named Matt. With blond hair spiked like the guys in NSYNC (who I referred to as NSTINK), he got kicked out of class often for saying "butt" and calling out while the teacher was speaking. Though we never specifically talked about it, I recall informing my mom about this new relationship status, explaining that, “I know he’s my boyfriend because sometimes in class we look at each other and lower our glasses and do this,” winking my eye as if onstage. My thick, pink glasses were worn to correct a lazy eye. Hardly attractive, but I didn’t care. My eyes were usually glued to a Gameboy color, battling trainers in Pokémon or to the pictures included in the CD notes of the Backstreet Boys Millennium.

In elementary school, my friends started going out with boys. This primarily consisted of sitting on the playground balance beam holding hands, both faces red and eyes glued to the ground. Sometimes, as the relationship progressed, they’d work up to a quick hug at the end of recess while the teachers were distracted. Despite the painful awkwardness, my friends would brag incessantly about who they were going out with, and speculate who might end up going out next. The communication between girls and their boyfriends was usually done indirectly, and I became a middleman. My friend’s notes were laden with hearts drawn with sparkly gel pens and sometimes included an impression of their lips in the color of their mom’s old lipstick. In class, I’d deliver them and pick up the responses. Notes from the boys were simple; the girl’s name in pencil, all caps, sometimes with a tiny, sorry looking heart underneath. During slumber parties my friends would read the notes aloud as the other girls giggled and sang “____ and ___ sittin’ in a tree, K-I-S-S-I-N-G!” I’d feel a pang of jealousy that was hardly appeased by the assurance that, “You’ll get a boyfriend soon, Sarah!”

So, as my friends went out with boys whom I secretly had crushes on, who I thought about while listening to Britney Spears’ “Anticipating” on my Hit Clips, I grew cynical. “You guys don’t even go anywhere,” I’d say. Always ready to support those going through breakups, I’d give advice regarding the pointlessness of boyfriends.

In grade school, Valentine’s Day was always anticipated. Arriving to class, we’d deliver metallic Valentines featuring taped-on lollipops and our favorite cartoon characters saying something mindless. In third grade I worked up the courage to deliver a special Valentine, bought with my own money, to my crush. Much time was spent at the drug store searching for the perfect heart shaped box that accurately expressed my affection. Settling on a little four-piece Russell Stover assortment with Rocket Power characters on the front, I spent the night before anxiously planning how to approach my crush. Initially, I was going to put it in his locker. On the bus, deciding not to be a chicken, I prepared myself to walk up to him and deliver it. While the class was lining up to go to lunch, I clutched my Rocket Power Valentine in sweaty hands, and passed other students to walk up to him and say, “This is for you.” He turned around to look at me, wide-eyed, and shook his head. My stomach fell as he turned back around, leaving me still holding my Valentine up toward him, humiliated. As I passed the trashcan by the door, I angrily ditched my Rocket Power chocolates and vowed never to give a boy a Valentine again.

By middle school I was giving out anti-Valentines with words like “Happy consumerist-oriented, sorry excuse for Love Day” on them. Instead of candy, I attached carnations that I’d dyed black. Usually clad in Hollister polo’s and Abercrombie jeans, I wore all black. My nails were painted black. Ostensibly it was a joke that everyone appreciated, but under my Hot Topic t-shirt was a sad little middle school heart that remembered my damned Rocket Power Valentine.

Though I’ve been in a wonderful relationship for two years now, my perception of Valentine’s Day remains unchanged. Overpriced candy at the drug store annoys me, and I think those giant teddy bears wielding hearts that read “I LOVE YOU” deserve to be ripped open. My boyfriend gets anti-Valentines, and I still wear black.