The Jackson Pollock era has returned. 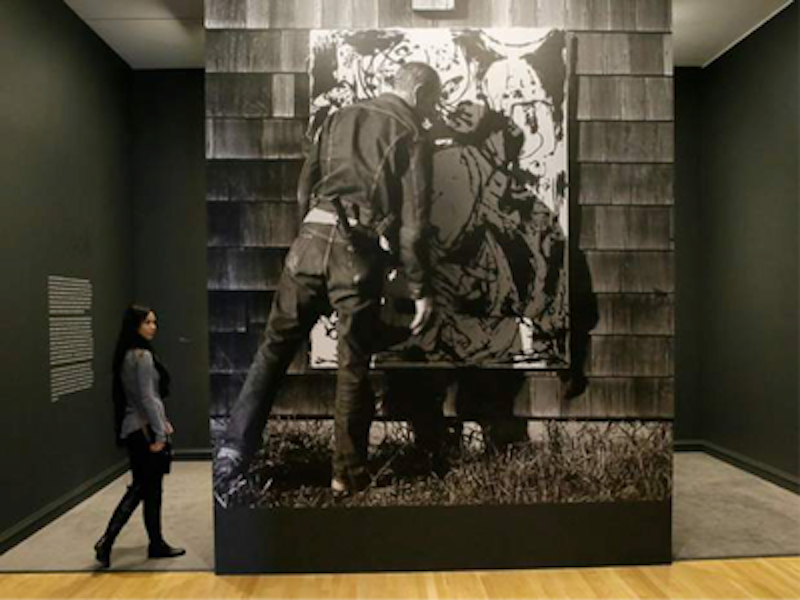 It must be excruciating for the few remaining Jackson Pollock detractors, wherever they’ve run off to, to have watched and heard as the conqueror of the whole American painting enterprise has returned, amid a level of attention and praise and excitement not seen in years. Pollock news and presence has recently reached some sort of a constant hum, unknown since he was discovered by the mainstream outside New York in 1949, when Life magazine asked: Is he the greatest American painter?

Museums around the world are benefiting from hundreds of thousands of visitors and media attention, simply for their association with the recent Pollock hoopla. Even individual Pollocks are making news. The University of Iowa is leveraging its single Pollock painting seeking funding for not only a new art museum but also an entire downtown multi-use development. More than 300,000 people visited that painting, 1943’s Mural, at the Getty Museum in Los Angeles, following its restoration there. What followed: A book, a just-released documentary film, and a tour of Europe. All starring a single painting. (The Venice total: 250,000.)

A Pollock leads a new exhibit of mid-century modern paintings in Iran, of all places, many of which have not been seen since before that country’s revolution in 1979. And then there are controversies. With Pollock, there are always controversies.

But the moment that sealed the ascendancy to the zeitgeist for Pollock is the near universally praised largest exhibit ever of his series of mysterious black paintings, at the Dallas Museum of Art through March 20. These works were generally derided by critics and ignored by buyers when first shown in 1951. The artist created these immediately after the half-decade following arrival of those 17-foot-wide abstract canvases that make up Pollock’s peak era. The black works, still created on the floor, with paint dripped and flung and poured and oozed, show a splashier, thicker application. The surprise is that some figuration is to be found, often semi-hidden or peaking out of corners. Faces or bodies or heads. Laughing, grimacing or watching. A move generally objected to by critics and defenders of Cultureburg, as Tom Wolfe mockingly and incisively labeled the New York art industry 40 years ago.

Only a few of the black paintings make it into Pollock books, often only to show his drunken decline. But today is a new day. Praise for the Dallas exhibit came from The New York Times, The New Yorker, The Los Angeles Times, and Art News. The Boston Globe wavered, offering plenty of space nonetheless. The Wall Street Journal named the exhibit one of the best of the year. The consensus is this collection shows the artist not content to simply repeat the processes and strategies that led to the achievement of his major works that we have all seen and recognize. The black paintings are “a triumphant combination of everything he has learned in his career,” says Gavin Delahunty, curator of the exhibit. Triumphant, but not until now.

Then there’s MoMA’s own exhibition, "Jackson Pollock: A Collection Survey, 1934–1954" on view to May 1, culled from the museum’s unmatched collection. On the big screen Pollock fans have “Mural: The Story of a Modern Masterpiece,” about the single work that likely served as the creative door through which the artist found his signature style. And “Peggy Guggenheim: Art Addict,” focusing on the major financial supporter and Pollock career booster. Both films played film festivals and are well-reviewed.

All this as the latest fake-paintings scandal plays out. The owners of the now defunct New York City gallery Knoedler and Company are defending a fraud lawsuit in a truly entertaining mess of a trial over the past three weeks. One collector paid nearly $300,000 for a phony Pollock painting in 2000 and hung it in her apartment for a decade. She never seemed to noticed that the artist's signature was misspelled "Pollok." Major reveal: It turns out if you pay me to say that your painting is legit, I’ll say your painting is legit. I can always testify, with a straight face, that I never gave you permission to hand out a piece of paper claiming I told you that your painting is legit.

Pollock, who died in 1956, made next to nothing from his paintings, some of which today are valued at more than $100 million. All true Pollock fans have endured the eye-rolling from those who despise any attention given the painter. My kid could paint that. But that’s the point. “Pollock elaborated a way of painting so particular to him that it was impossible to copy without seeming to fake a Pollock,” writes New York Times critic Michael Kimmelman. History matters. Take a long look. Follow those lines that just lead deeper and deeper, into someplace important.

Photo taken Wednesday, Nov. 18, 2015, at the “Jackson Pollock: Blind Spots” exhibit featured at the Dallas Museum of Art. Photo by LM Otero of The Associated Press.