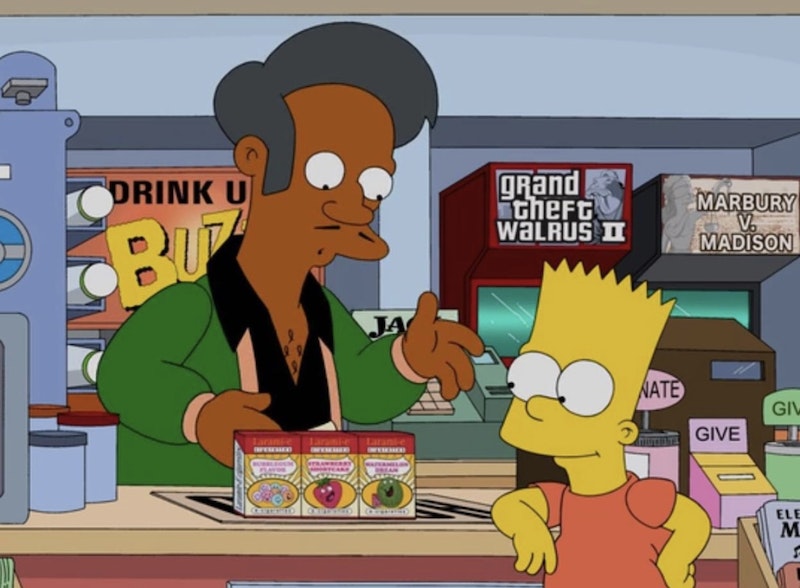 Consider all the wreckage 2020 will have left behind, regardless of the election outcome or whom you blame for it all.

Culture took a beating, resulting in a substantial loss in civility. The “anti”-racist purge led to people demanding the Simpsons’ Indian character Apu be recast, a push that climaxed (simultaneously with a wave of Black Lives Matter riots) with Hank Azaria performing the role a final time this year. Should Bart Simpson be voiced by a male to avoid “appropriation,” one wonders, or does a woman continuing to do it make it acceptable because it’s “trans”?

Casting must stay in such strict and compartmentalized ethnic lanes these days that I was recently accused by a particularly tantrum-prone left-wing comics editor of consciously wanting to increase black unemployment, just because I suggested that it might be okay to continue having the black character Cleveland on Family Guy be voiced by an actor who’s white. But thinking this actor is doing all right doesn’t imply any aversion to seeing new black characters created or black actors hired for numerous other roles, be they black, Asian, alien, etc.—even for white roles. I don’t care, so long as they’re funny.

The left loves to lie about your motives, no matter how implausible and psychologically tone-deaf their narrative is. As a counter-measure, most people are by now ready to give up and just keep their mouths shut, including people who probably would’ve made decent voice actors.

The “anti”-racist march to the sea progressed this year from the relatively modest demand for the removal of Confederate statues all the way to this week’s embarrassing denouement in which a statue of Abraham Lincoln, the man who ended slavery, was torn down by the nihilists of Portland, Oregon (who are really on the same side as the government, both factions tending toward socialism, which is after all the settling of accounts through physical force, in contrast to the voluntary exchange of the marketplace).

When a like-minded city such as Seattle, meanwhile, pays $150,000 to an ex-pimp to advise them on alternatives to policing—in the midst of one of the greatest financial crises the world has ever known—you can rest assured politicians feel they’re helping out a kindred spirit, not just looking for fresh ideas. That reminds me that I would’ve been perfectly happy with this year’s protest-driven renaming of Princeton’s Woodrow Wilson School of Public and International Affairs, if only they had admitted that the most offensive thing about Wilson is that he was a politician.

Seattle’s comfort with the pimp shouldn’t surprise us. A BLM site only recently scrubbed its earlier call to eliminate the nuclear family—much as BLM’s call to legalize trespassing has been downplayed in later manifestoes—keeping up the pretense that the movement is mainly about (the worthy cause of) punishing police brutality.

Meanwhile, given mainstream (i.e., leftist) media’s dereliction of duty, having a fed-up, camera-toting friend in a place like Atlanta is the only way you’ll see footage of the post-apocalyptic behavior by BLM jerks firing weapons randomly into the air, driving (or blocking) cars menacingly, and shouting things like “No justice, no sleep!“ to terrorize whole neighborhoods of innocents, including children. Big-name corporations pouring money into such movements are either abject cowards who overestimate the efficacy of bribery or deliberate subversives happy to see the world burn if they can make the flames spell out their corporate logos.

Yet it’s the founder of the open social media forum called Gab who has his VISA account suspended—for “hate speech,” which in this case merely means letting other people talk—another step toward the imminent day when burning a building down yields no legal penalty (again, see: Portland) but listening to people complain about arsonists gets your bank account seized.

Meanwhile, on the gender front, at least the heroic Bill Burr, in the most recent Saturday Night Live opening monologue, said what we all know to be true, which is that noble-sounding political causes not only go too far or get hijacked but tend to keep being hijacked by white women, despite them probably being the single most pampered and catered-to demographic in all of human history, the de facto rulers, by hypersensitive, scolding fiat, of most of our culture.

If women had but paused to declare victory, there could’ve been a pleasant, almost conflict-free interlude for all of us, but the left must push on to ever stranger territory, and so we get things like TikTok videos spread this year, without irony, of people burning J.K. Rowling books with pride because she won’t quite call “trans women” full-fledged women. Burning books by liberal Rowling? Perhaps witches and warlocks should burn next. Who’d even notice amidst all the fire lately?

In the end, you might at least think electoral democracy offers a way to check some of the nation’s worst political impulses, but in what sense is there accountability in electoral politics when New York’s Gov. Andrew Cuomo can kill thousands by herding them into COVID-infected nursing homes (whether you think of them as victims of Chinese communist science, U.S. bureaucratic incompetence, or nature), even as millions of businesses are done in by rioting and regulations in his state, but because his national profile was raised in the process, he’s still reportedly on the short list of potential attorney general nominees for Democratic presidential candidate Joe Biden?

Being a barbarian and a destroyer pays now. The only true reckoning, many people begin to suspect, will be complete collapse.