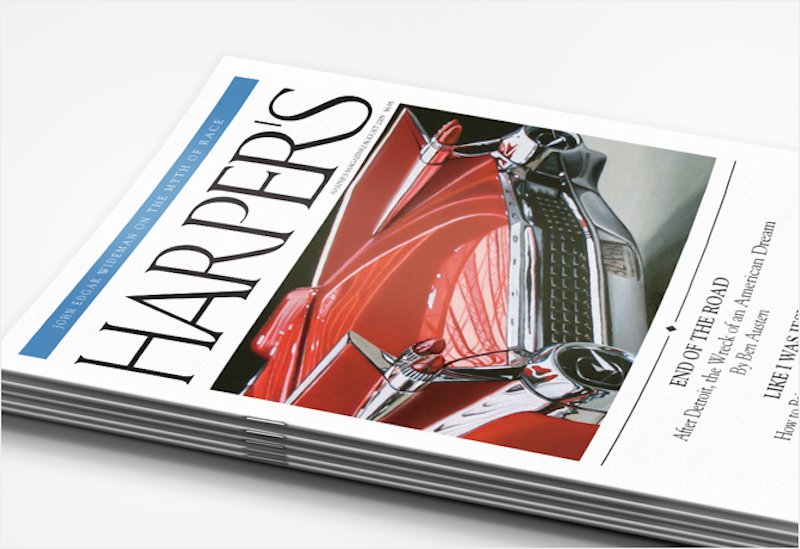 Donald Trump and his enablers want you to believe that the media is composed entirely of out-of-touch coastal elites. Anti-media media personalities like Salena Zito and Chris Arnade stump through rural white America, nodding sagely at the pronouncements of Trump voters and wagging a rhetorical finger at the bubble-dwelling city denizens who wrongly believe that real people live in urban areas, too. There’s a class divide in America, we’re told, and it’s between the smug liberal press and everyone else.

This narrative is deliberately intended to distract from an actual discussion of class. But the recent effort by women writers to protect one of their own from a punitive article in Harper's is a reminder that writers—like truck drivers, farmers, or teachers—are workers. Media owners are elites, but the people who work for them generally aren’t. And workers are not empowered by sneering at everyone who lives in cities. They're empowered through solidarity.

This week Dayna Tortorici, editor of n+1, tweeted that she had information that Harper's was planning to out the creator of the “Shitty Men in Media” list. The list was a spreadsheet created after the sexual abuse revelations about Harvey Weinstein. An anonymous woman created a crowd-sourced document in which women could list men who’d engaged in abusive or sexist behavior. The list was meant as a low-key way for women to share information about men who might be a threat, so they could protect themselves. It spread quickly, though, and numerous news sources debated whether it was ethical or right to create such a document. It also served as a place to start for reporters investigating instances of misconduct at media outlets.

The list was controversial; exposing the creator could damage her career, and would also expose her to threats and harassment, as Men's Rights Activists and other anti-feminist trolls attempted to terrorize her into silence. In order to prevent that, numerous women writers and reporters called on Harper's, and story author Katie Roiphe, to refrain from outing the woman in question. Nicole Cliffe, a writer at Elle, offered to compensate any writer with a piece in the upcoming issue of Harper's if they pulled their articles in protest.

Cliffe's offer was an act of feminist solidarity. But it was also an act of labor solidarity. People withdrawing their articles from Harper's was a labor action—it was a work stoppage. The work stoppage was undertaken in order to protect an individual worker. But like all labor actions, it was also undertaken to force better workplace practices for everyone. The “Shitty Men in Media” list was an effort to protect women from workplace harassment; it was a response to unsafe working conditions. Rather than address those working conditions, Harper's decided to out and endanger the whistle-blower. That’s a common management response. And it's why labor solidarity, and freedom to organize, are vital tools for justice in every industry.

Moira Donegan, the list’s creator, outed herself at The Cut, and confirmed that Roiphe planned to reveal her name. Donegan decided that her best option was to come forward on her own terms, rather than allowing Harper's to go to press first. It's shameful she had to do that. I hope the campaign on her behalf will help her get the resources she needs to deal with the backlash.

But Cliffe's campaign is also important in itself. Labor actions are valuable because they show labor power. Management needs to know that labor can organize. Labor needs to develop tactics, and see its own strength. Writers individually in media have little leverage, and almost no say in how publishers treat them. That's why sexist, unsafe working conditions persist. Cliffe showed one way in which writers, working together, can exert pressure on the media to protect themselves from sexism, harassment, and exploitation.