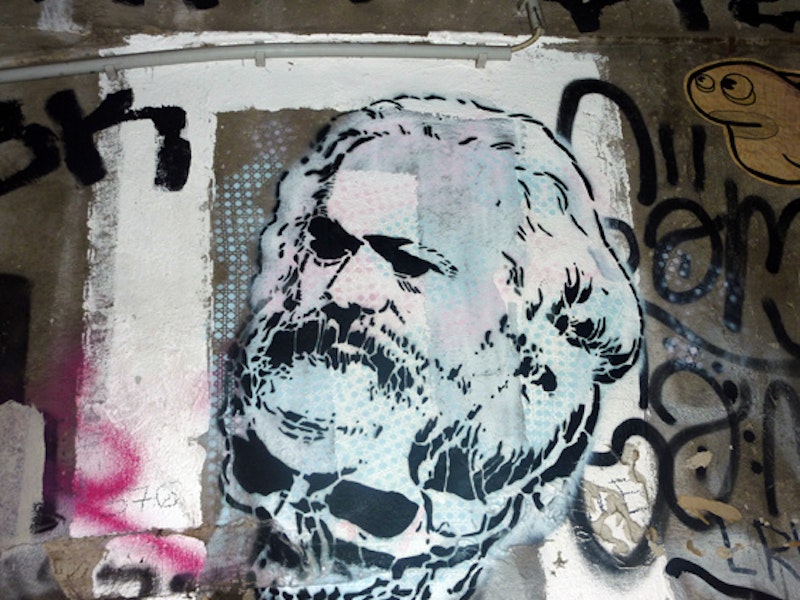 ••• “The Great Financial Crisis is a crisis of Capitalism.”

The financial crisis is a case of private debt deflation. That means private debt is retired faster than new private debt is created. Technically-speaking, there are a number of solutions to it—and government has an active role to play here. One may claim that this is proof the state’s intervention is necessary to keep capitalism going. Yes, it is. Any system of organization has a center, from which a hierarchy (state of doing things) is born. Whether it’s feudalism, socialism, capitalism, or tribalism—there’s a form of government. The council of elders, the council of archons, the king, the president, the senate, and so on. It goes by different names, and its main function is to settle disputes. In order to have a functioning market, an institution capable of settling disputes, enforcing contract laws, and defending property rights is needed. All monetary systems are cyclical—and in order to work properly, require the expansion of credit/debt. Either the government ensures that expansion by taking on more debt on its balance sheet, or it resets the system, and private credit can grow again.

••• “The only way to destroy Capitalism is to abolish labor”

A lot of “new-school” Marxists desire a future with 100 percent unemployment—in which machines will do all the work. But even with full automation, you can’t abolish human labor. If people want to labor for themselves or each other (intellectual and manual), that’s their decision. Now the Marxists will shout at me, “Straw man! We’re referring to wage labor. We want to abolish wage labor. We want to abolish money.” Then how are you going to keep track of economic activity without money? The Marxists’ answer: “We will have labor certificates.” Don’t think I’m making this stuff up. I actually had this conversation with an online Marxist. Labor certificates are just another word for money. By issuing labor certificates to keep track of economic activity, you’re in effect not abolishing wage labor or money.

••• “Capitalists can only turn a profit by exploiting workers”

You can turn a profit as a business owner by not overworking your staff, threatening to fire them, whipping them, gluing their bums to the seat, denying them bathroom and lunch breaks, while paying a decent wage. This doesn’t mean that there aren’t capitalists who exploit workers. They exist, their numbers are vast, their methods are varied and cruel, and this phenomenon has been going on for a long time.

This one is trickier, because LTV involves a lot of jargon; and as he wrote his stuff, Marx often changed his mind. I won’t debunk the Labor Theory of Value here. I’ll just say that I don’t find it useful, in both theoretical and practical sense. Steedman showed that it’s possible to calculate prices independently of any theory of value. Straffians also believe the “transformation problem” is nonsensical and production should not be analyzed from any perspective of utility or value, but from physical quantities and reproduction of industry. A story that starts from labor value and ends up with a falling rate of profit and a uniform economy-wide surplus value doesn’t hold. Marx tried to justify it with a snapshot of a particular moment in time, but Steedman showed there was no reason to expect the economy would be in or remain in this state, and that there’s no need to invoke “value” in the analysis at all. Ernst Berndt concludes the same in his paper on Energy Theories of Value.

••• “The rate of profit tends to decrease over time”

True. However, Marxists don’t know why that is. The answer lies in the accounting, which has nothing to do with opinion or ideology.

••• “Opposing rent seeking is not a viable strategy for the Left”

No worries: Bruening and Sawicky have the answers. It's not correct or easy to survey the land and send the tax collectors across the country, because it's easy for the owners to hide their land in an off-shore tax haven. It's not as if un-captured economic rent translates into higher costs of production (and consumption) and incentives for idle land. It's not as if un-captured economic rent is conducive to supply-side and demand-side inflation, conducive to stark income and wealth inequality and poverty. Don't worry: Bruening and company have the answers—like the bright idea of levying a VAT (regressive tax) to "pay for” a basic income. That’s why the Left has been losing all these decades against an increasingly buffoonish and pathetic Right. Opposing rent-seeking is the most viable political strategy, as it galvanizes people across the political spectrum. This dumb type of thinking reminds me of the Communist parties from the 19th and 20th centuries. Instead of doing good PR and advocating only for the nationalization of natural monopolies, they advocated full-on collectivization. Meaning? That even that meager house you built was going to become property of the state. No wonder they got labeled as "the red plague."