If it’s not PC than it must be true! 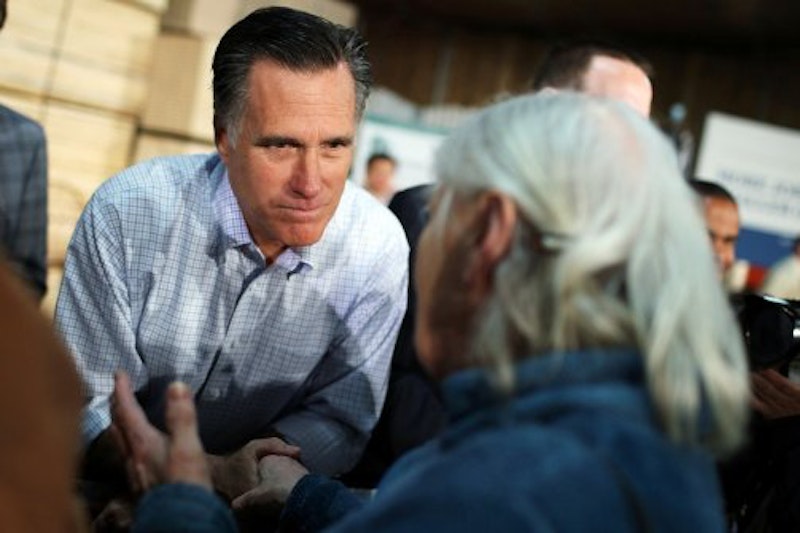 Leave it to The National Review to remind women why they should vote for Mitt Romney. No, truly: one of the flagship publications of the Right’s echo chamber has gone and done a great service. Kevin D. Williamson, in a column with the not-quite-getting-it headline “Like a Boss,” breaks down why Romney is a virile and awesome person while President Obama is a cardigan-wearing cardigan wearer. In sum: Romney has a lot of money and a lot of sons; Obama doesn’t have a lot of money and two daughters; ergo, Romney should have 100 percent of the women’s vote.

Romney has 18 grandchildren, and they exceed a 2:1 ratio of grandsons to granddaughters (13:5). When they go to church at their summer-vacation home, the Romney clan makes up a third of the congregation. He is basically a tribal chieftain. Professor Obama? Two daughters. May as well give the guy a cardigan. And fallopian tubes.

It almost reads as bad performance art, though it’s simply more of the same Leave It to Beaver, back-to-the-glorious-50s bullshit that pervades so much of conservative America’s cultural conscience. Shorter version: if only women acted like they did during a time when money and status was the only thing that mattered to them insofar as the wealth status of their men was the only way they could be secure and happy. Men bring home the bacon, they put the sons in the uterus, and nothing more need be said.

From an evolutionary point of view, Mitt Romney should get 100 percent of the female vote. All of it. He should get Michelle Obama’s vote. You can insert your own Mormon polygamy joke here, but the ladies do tend to flock to successful executives and entrepreneurs. Saleh al-Rajhi, billionaire banker, left behind 61 children when he cashed out last year. We don’t do harems here, of course, but Romney is exactly the kind of guy who in another time and place would have the option of maintaining one. He’s a boss.

In a nice moment of accidental poetry, Williamson misuses the word “harem” (as does pretty much everyone else, it should be said). He writes, “We don’t do harems here.” We don’t? As opposed to… where? Over there? Ah, yes, the land of Over There is where the harems are. The accidental poetry is his conflation that having sons is better than having daughters. It doesn’t take a lot bookish know-how to remember that a predilection for boys over girls underlies any number of horrible customs across the world, from Over There to Also Over There and Oh, There, Too. Women of America: having too many daughters is emasculating your husband, so be good girls and make sure you make the boys and the not the girls.

Hillary Rodham Clinton told us that it takes a village, and Mitt Romney showed us how to populate a village with thriving offspring. Newsweek, which as of this writing is still in business, recently ran a cover photo of Romney with the headline: “The Wimp Factor: Is He Just Too Insecure to Be President?” Look at his fat stacks. Look at that mess of sons and grandchildren. Look at a picture of Ann Romney on her wedding day and that cocky smirk on his face.

Don’t be distracted by his use of “fat stacks”; this is akin to your father trying to get “hip” with you and your “homies” by pulling his baseball hat to the side and un-tucking his shirt. I just can’t get over how fully and cheerfully Williamson embraces the argument that having a ton of children is a qualifier. The article only mentions Romney’s wife as an object with a “cocky smile” because, please, we’re talking about a man here—a man who makes a lot of babies.

And what timing! We’re still talking about Todd Akin’s pure gaffe (wherein he told the honest truth as he knows it) regarding rape and pregnancy based on the same sort of pseudoscience and corrupted morality that undergirds so many conservative politicians and their talking points. Some people are actually shocked to hear a Republican say something like “legitimate rape” as if 100-some House Republicans hadn’t already attempted to redefine rape into different categories like “forcible rape.” I guess Akin’s comments came from deep within, without any of the sort of soft sexism that defines an article like Williamson’s. Akin came right out and said it; Williamson is just being one of the guys, you know? The headline is culled from all those Internet “memes” and he name drops Jay-Z. He’s kinda kidding but not really! If it’s not PC than it must be true!

Williamson’s article and Akin’s comments are all a part of the broader conservative mindset that sort of mimics Newton’s first law of motion: women are objects at rest that will remain at rest until acted upon by men.