His convention speech shows he can speak to wingnuts and swing voters at the same time. Meanwhile, fact checkers can go to hell. 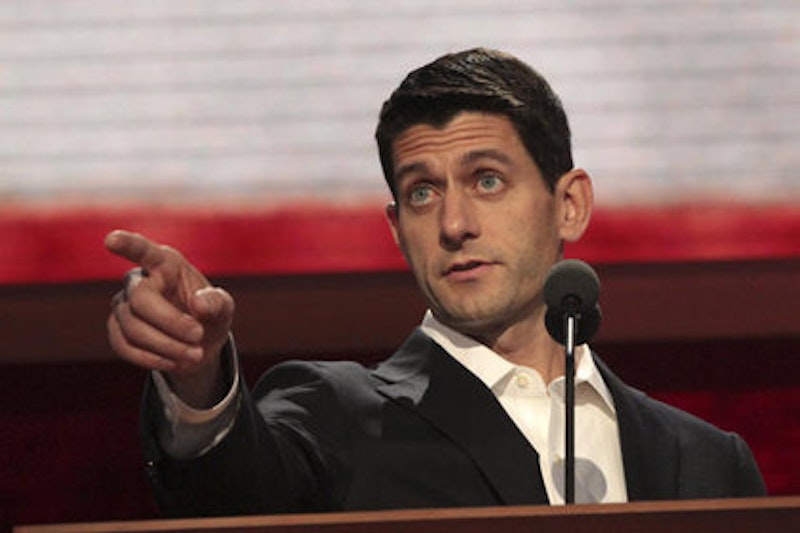 Tell me he isn't good. Paul Ryan delivered a hard-right speech angled for maximum appeal to undecided voters. The trick was to present a catalog of ideological gimmes like you were one regular guy telling another regular guy to get serious for a moment and look at things straight. Ryan managed it. “Going to level with you,” he said, and “don’t have that much time” and “know we can do this” and much more of an earnestly portentous sort. He said all that and didn't come off as a dork. He seemed like the guy with the neighborhood's best power tools, and against his will he was leveling some hard truths about your Little League coaching style.

There are many things not to believe in Ryan's speech. But a politician who can look sincere, instead of just trying to look sincere, is a politician with a future. During his address there came several moments when Ryan paused, leaned forward and was piercingly sincere, just him and the camera. None of these moments seemed funny at the time, so Ryan is a dangerous man.

The pitch behind his speech was, come on, time to man up and face the facts, this debt habit is going to kill you. But it wasn't his listeners' habits that he had in mind. Instead it was the debt habit of that other guy, Barack Obama. As it turns out, though we're all self-reliant individuals made in the image of God, we're not to blame for anything going wrong in our lives just now. Ryan: “And I hope you understand this too, if you’re feeling left out or passed by: You have not failed, your leaders have failed you.” Ryan gave his audience the pleasure of moral brow wrinkling and chin hiking without any sins to face up to. We were summoned to become morally serious about somebody else's shortcomings. That's my kind of serious, and Ryan does it better than Peggy Noonan.

Facts on the cutting room floor. The factory where Obama gave a campaign speech in 2008 was closed down before he became president, not (as you might think from Ryan's speech) after he became president. The deficit-reduction plan that Obama allegedly stiffed had been voted against by Paul Ryan. The money that Obama “funneled” out of Medicare is also funneled (or cut, one might say) in Ryan's proposed plan for the U.S. budget. When Obama spent his stimulus money, employment went up. When America's credit rating was downgraded, the downgrader pointed at “Republicans in Congress” and their refusal to raise taxes.

Here's another. Ryan never firms up the connection between Obama's terrible alleged debt habit and the nation's crummy economic weather. He assumes our giant deficit is what's crushing the life from the nation's job givers. He doesn't mention the debt taken on by so many families of their own free will and now rotting in the form of unpaid mortgages. There's a giant weight, and one pressing down directly on people who might otherwise be buying products and paying kids to mow the lawn.

Kids in Canada wish they was dead. I mention lawns because they matter to Ryan. When he was a teen, he earned money like a lot of kids do, and he made a point of telling us in his speech. I'll note that his family was one of his town's richest, and so on, but he worked. The problem is that he pretends he was changing the course of his destiny: “When I was waiting tables, washing dishes, or mowing lawns for money, I never thought of myself as stuck in some station in life.” I don't doubt that he was a young man with his chin pointed toward a hard-driving, highly active future. But he wasn't climbing out of small origins. As evidence for the American Dream, he's bogus.

But hear him: “I was on my own path, my own journey, an American journey where I could think for myself, decide for myself, define happiness for myself. That’s what we do in this country… That’s freedom, and I’ll take it any day over the supervision and sanctimony of the central planners.” What central planners? You'd think that Obama had outlawed summer jobs and was making kids sit around and think about their gender-ethnic oppression.

Leading up to his lawn mower passage, Ryan told us we don't have to settle “for the best this administration offers—a dull, adventureless journey from one entitlement to the next, a government-planned life, a country where everything is free but us.” Taken all together, it would appear the idea is that, because of Obamacare, kids will no longer mow lawns and dream big dreams. So one must ask the following: Has Ryan ever met a foreigner? Kids do plenty of working and dreaming in countries where everyone gets their health care. Talk to a Québecois college kid working a cash register and then try believing that Ayn Rand shit about sheeple and collectivist serfdom. It all evaporates.

This happens so often with the right. They spin fearsome dreams and lovely visions, and then the shreds of vapor part and you find yourself in the same old clunky, tacky, beleaguered but adequate reality that has been there all along.

The wingnut flavor. Solyndra, 2000 pages, “troubled governments of Europe,” “the great Jack Kemp,” Greek columns. They're all there in the speech, but it's the last item that gives you the concentrated essence of wingnuttery. The right hates those Greek columns. Obama had them on stage at his 2008 convention, then packed the things away and forgot about them. The right still remembers. They see the columns as a moment of truth, a case of the mask slipping: Obama's foppery came out 10 feet high and propped where the cameras could see. If only people would notice. After all, if you discount the existence of the Lincoln Memorial and the U.S. Capitol building, the only reason a candidate would want fancy fluted columns around him would be to indulge his preening need for ton.

Admittedly, it takes some doing to overlook the Lincoln Memorial and the U.S. Capitol. It takes some more doing to then tell yourself that you're looking at the unvarnished reality others flinch away from. The trick is to put a hand over one eye and look hard at some selected something that shows you must be right. Wingnuts make a lifestyle of it, and Paul Ryan is their new king. National monuments, the non-existence of Bolshevism in America, the existence of a meltdown caused by financial deregulation—it all disappears, and there he is, talking earnestly about the fancies in his head. He does this better than any politician since Reagan, and he's going to be around for a long time.