The Times’ Public Editor buries his most important point. 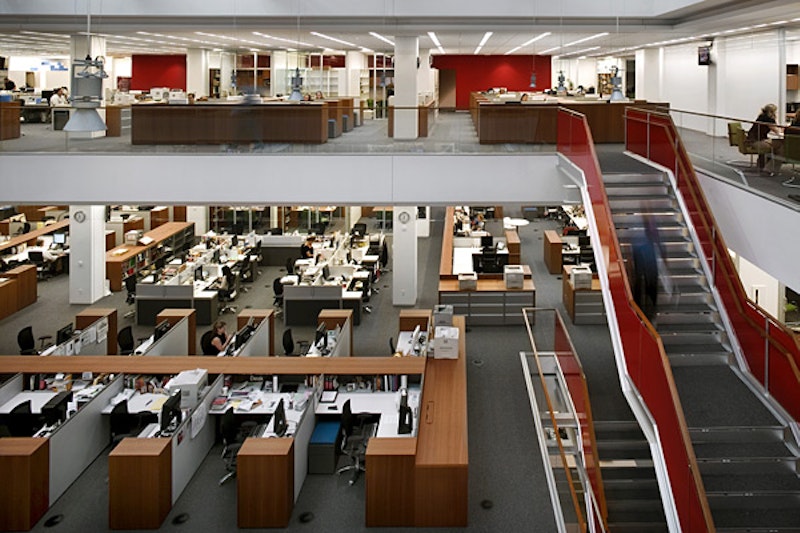 Arthur Brisbane’s final “Public Editor” column for The New York Times on Aug. 26 stirred up a small hornet’s nest in the incestuous media world, but for the wrong reasons. Reacting to Brisbane’s entirely accurate observation that the Times is splattered with naked liberal bias in many of its departments—“As a result, developments like the Occupy movement and gay marriage seem almost to erupt in The Times, overloved and undermanaged, more like causes than news subjects.”—the paper’s executive editor Jill Abramson told Politico’s Dylan Myers that Brisbane was guilty of making “sweeping conclusions.” The eyes don’t lie, as any reader who isn’t entirely blinkered by the Times’ parochial prejudices can see, but it’s hardly surprising that Abramson’s neck would twitch at such heresy within her own pages.

What I found far more significant was Brisbane’s almost tossed-off comment that, despite the Times’ “investment in journalism,” readers increasingly access the paper’s content not directly through the print or website venues, but from any number of aggregate sources. I’ve noted before that the Times’ digital operation is excellent—if you filter out, at least in my case, the political malarkey—and one could spend hours every day scrolling through its content. And maybe some people, retirees perhaps, do just that, but most don’t have the time. Which makes you wonder just how sound publisher Arthur Sulzberger Jr.’s investment really is—on the one hand, there’s no returning to the double-digit profit margin days of print-only, and he can’t just give up, yet how long can the company sustain continued quarterly losses?

The emphasis on social and mobile media means that Times material appears far from the home base of NYTimes.com, not to mention the distant shores of the Old Country, print. For journalists, this presents tantalizing new opportunities to build a personal audience… The result is an oddly disaggregated New York Times of hyper-engaged journalists building their own brands, and company content flung willy-nilly into the ether.

This is most obvious on Twitter, where reporters and pundits (from all over) are indeed creating their “brand,” and if their Tweets are repetitious, so what? You can hardly blame these men and women for Looking Out For Number One, since who can tell when their home base of employment will further trim down or shutter altogether. After all, there are television producers to schmooze, book contracts (for the fortunate few) to snag, or, down the road, continued prominence in either political work or academia. Does the Times’ Thomas Friedman—to pick one at random—care more about his own personal following or the paper that pays his salary? Twenty years ago it’d be the latter; today, it’s certainly the former.

Additionally, though few journalists would admit it, since almost to a person they claim a reading regimen that’s impossible to fathom, but articles, even topical political ones, that run more than 1000 words, just aren’t read much anymore. One example is Jane Mayer’s lengthy “Schmooze or Lose” in the Aug. 27 New Yorker, which I finally read yesterday, and found somewhat disingenuous—the gist: Democratic fat cat donors don’t cough up a million bucks for political favors, but more for ideological and vanity reasons, while their Republican counterparts donate to boost their bottom lines—but still worthwhile, if only to see what the current spin on President Obama from a supporter is.

It may be I’m out of the Twitter/Facebook loop, but I dirty myself with those social media sites enough to know that Mayer’s article didn’t receive a scintilla of the attention that the hurricane roiling the GOP convention did, or the rat-a-tat-tat of quips (some successful, most not) about the speeches of Ann Romney or Chris Christie. “Mrs. Romney has entered the hall”; “Santorum proves again he’s a jackass” or “The Ron Paul forces won’t give up.” Oh, and many use Twitter to make night plans, asking for restaurant and bar recommendations; and I must’ve looked at over 100 people complaining about their flights to Tampa.

But hey, it’s all in “real time” and that’s the main thing.