Why I'm In The Tank For Dubai

Mostly for its residents but also, a little, for its corrupt, repressive ruling family. 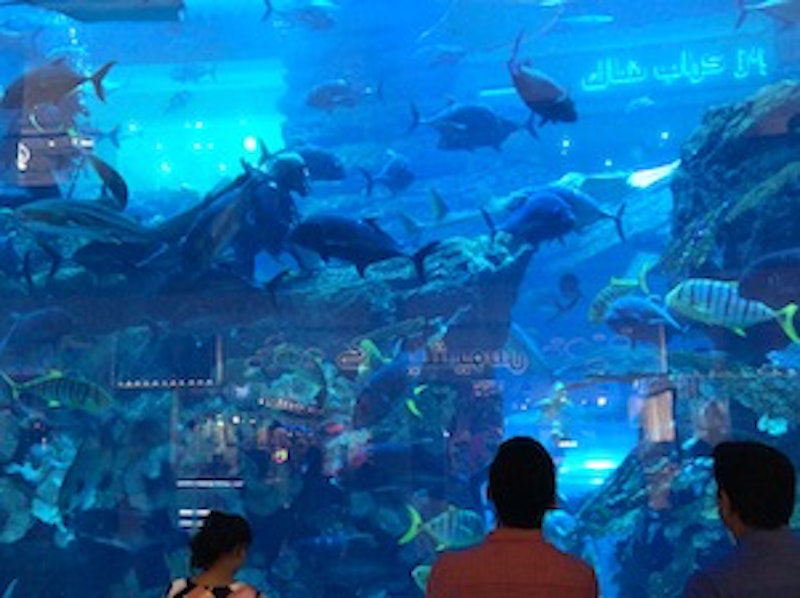 DUBAI—The largest and most populous city in the United Arab Emirates and a monarchy ruled by the Al Maktoum family since 1833, Dubai has a terrible record on human rights. Its treatment of foreign workers—who make up about 85 percent of the population—is reportedly appalling.

It’s a leading member of the U.S.-backed and armed Saudi-led coalition that’s devastating Yemen, for which I feel a great deal of sympathy. “Human Rights Watch has documented 87 apparently unlawful coalition attacks, some likely war crimes, that have killed nearly 1,000 civilians since March 2015,” a report by the group says, and that understates the general carnage by a longshot. (I assume the UAE and the Saudis have some thin geopolitical explanation for the war, but whatever it is doesn’t justify the atrocities they’re committing with support from the Trump administration.)

It’s also hard to find a drink and, according to Wikipedia, “kissing in certain places is illegal and can result in deportation.”

So why am I in the tank for Dubai and soft on the ruling family?

Because life’s imperfect, everything’s relative and the perfect should never be the enemy of the good. Whatever its defects, and one of them is admittedly poverty, a lot of people in Dubai—about 85 percent who are foreign workers, from more than 100 countries—come to Dubai looking for a better life. And they find it. (More on that below.)

There’s also a superficial side to my affection. The food was amazing—a grilled mutton dish at a Pakistani restaurant was especially memorable—and natives and foreign residents were warm and generous. The weather was gorgeous and the Persian Gulf is spectacular. It’s lovely to stroll through the historic Bastakiya Area and the marketplaces, especially the Spice Market.

Also, you can laugh at Dubai’s excess, but the 163-floor, 1,918-foot Burj Khalifa is breathtaking, as is the gigantic mall next door. A lot of the shops there were well known Western brands, but the aquarium, ice skating rink and and waterfall are also astonishing.

But let’s go back to the politically and socially positive.

My fondness for Dubai and partial admiration for the ruling family is also based on its significant achievements, especially in providing a pretty good quality of life for Emiratis and for many foreign workers. It’s far from perfect, of course. Ivan Szelenyi, the former Dean of Social Sciences at New York University of Abu Dhabi, conducted a study on Pakistani construction workers who had lived in Dubai. He found 46 percent were satisfied with wages and 64 percent were satisfied with working conditions. And while 67 percent felt they were treated like slaves, 57 percent would return. Another negative, according to this summary of Szelenyi’s findings, is that the guest worker system in Dubai and elsewhere in the United Arab Emirates “is only sustainable as long as South Asia remains poor and UAE remains an absolute monarchy, as political liberalization cannot accept such level of exploitation.”

Still, life in Dubai is far better for many people than it is in the dour United States, where—for reasons we needn’t debate here—a large chunk of the population is struggling to stay afloat. Furthermore, the U.S. also depends on a lot of cheap foreign labor and—far worse—much of it comes from countries that have been periodically invaded and/or pillaged by the United States and who come here because their nations are destitute.

One thing that’s especially striking to me, a longtime resident of Washington, DC and before that New York, is the incredible public transportation system. The subway and bus system take you all over the city, comfortably and reasonably priced. (You can also snicker at air-conditioned bus stops, but you wouldn’t if you had to stand in the sun waiting.)

Dubai also compares very favorably to Bangkok, Jakarta and Ho Chi Minh City, where I’d spent about two weeks before landing in Dubai. In those three cities, raw poverty is in your face, everywhere. In all of them, most notoriously Bangkok, women are available for a small price. One young woman of about 20 standing outside of Bangkok’s Nana Plaza, a major sex industry hub, thrust her cell phone at me. The message on the screen said she was deaf and offered herself up for 1500 bahts, the local currency, which is worth about $46. I have no doubt I could’ve negotiated that price down had I wanted to.

While it’s not on the same industrial scale, sex can be bought in Dubai as well. When I was walking by the main bus station one day I noticed a few, and then hundreds, of business cards featuring beautiful Asian woman, phone numbers and approximate locations, for example, a “relaxation spa” in a marketplace near a KFC.

Again, there are plenty of serious flaws. Even as a tourist—and Dubai was the one place I was mostly relaxing, not reporting and meeting activists and government critics—you can’t miss the omnipresent security presence, which is friendly towards visitors but must make any political activity a serious risk. Security is also heavy but less visible in Thailand, Indonesia and Vietnam, especially the latter, but you feel far less observed and freer to roam.

Dubai is small and there are only about three million residents so you can try to downplay its social achievements. It also has a lot of natural resource wealth, but then, too, so do Angola and Venezuela, for example, and they do a worse job fighting poverty. (I hesitate to mention Venezuela because it is unfairly singled out by the U.S. media—Colombia is far worse in terms of political repression and inequality, but it’s friendly to U.S. policy so mostly gets a pass—and because former President Hugo Chavez did a tremendous job helping the poor and even current president Nicolas Maduro has implemented some good programs.)

Also, there’s no doubt corruption thrives and the monarchy lives obscenely. But hey, corruption is endemic just about everywhere, so what do you expect?

What I didn’t expect was to see how much money trickles down to residents, including the foreign workers that continue to pour in. It’s a staggering achievement, and one that Saudi Arabia can also claim. So to all you political observers, but especially lefties: if you’re going to apologize for Cuba, you’re far better off apologizing for Dubai.