Good will toward none, season after season. 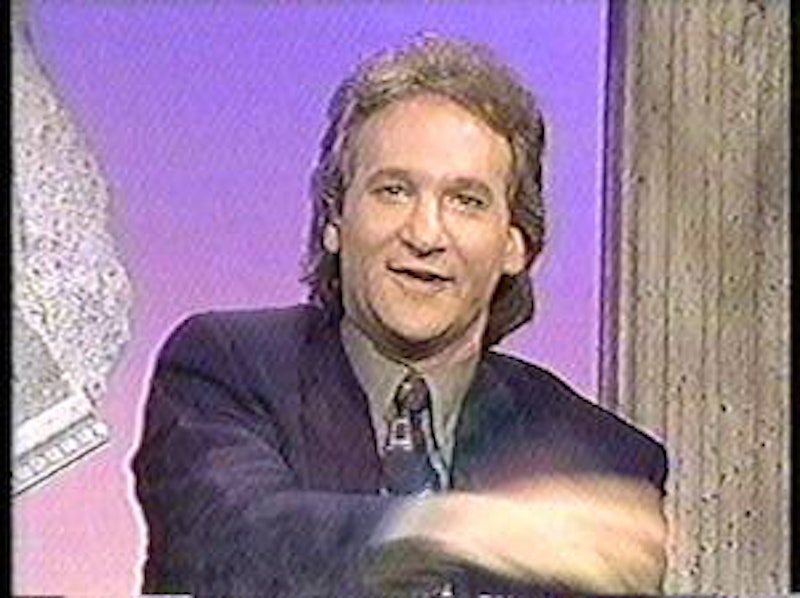 Just out of college, where I’d sometimes written comedy, I reacted to the show’s debut by making an important mental note that likely doomed my subsequent career: For the sake of the culture, I thought, try to avoid winning political arguments through mere snark and put-downs. Keep the humor to a minimum, aside from an occasional zinger, experienced newspaper editor Russ Smith, now publisher of Splice Today, told me a few years later when I was a columnist for his gonzo yet esteemed New York Press.

Looking at the morass of bile and wisecracks on Twitter—and on-air and in the White House—these days, it’s obvious that Don Rickles-level insult-comedy is where the political future lay, though. Maybe I should’ve taken that internship at Spy, just do humor and maybe only in passing do politics. Is it too late? It feels like only yesterday, but the historians and mathematicians, using the same soulless tabulations that tell us Politically Incorrect started 25 years ago, insist that Spy went out of business 20 years ago.

Most of the liberal people working at Politically Incorrect and Spy are probably duly horrified by Trump and other Tourette’s-like Twitter users, but wasn’t 1990s snark (including The Daily Show, now 22 years old) the precursor to today’s bile? I really don’t think it was Edmund Burke or William F. Buckley who led us here, though they had their own flaws, and we all bear some blame for the current state of discourse.

The two times I was backstage at Politically Incorrect, I met Janeane Garofalo and Laura Ingraham. If either had been in a mood to take advice from me, I might well have helped the career of Garofalo and harmed that of Ingraham.

Garofalo affirmed that SNL was a miserable experience and was probably already thinking about making the turn from comedy to serious politics, a turn cemented several years later by her stint on the doomed leftist radio network Air America. I would’ve suggested she just stick to getting laughs. Perhaps neither of us has a right to dispense advice, though, as we would both end up years later with bit parts in the obscure, low-budget sci-fi comedy Werewolf Bitches from Outer Space.

Ingraham was the future, I now realize, but my presumptuous advice to her two decades ago, before I knew she was going places, was: be careful not to sound mean. Ha! Oh, brother. If I knew then what I know now, etc. I also remember thinking at times back then that maybe I should just wait out the political conflict of the times until, you know, things got more calm and rational. Now I realize this is a waiting period that ends with the grave.

In the meantime, the Net really does try, in its way, to work out codes of civility. Tumblr just banned adult and pornographic content, largely to avoid prostitution crackdowns. Pundit Glenn Reynolds just wrote about quitting Twitter altogether and feeling saner for it—so I forgive him for sniping at me in one tweet before he decided the whole site is toxic.

It’s too easy to blame all our incivility on the tech, though. You know darn well it’s largely just revealing human nature, in all its petty grouchiness, in a more efficient fashion than ever before. I’m afraid to check whether the photojournalistic site Hot Chicks with Douchebags still exists, but it’s not as if the tacky-rich-male/shallow-female dynamics revealed there are going to go away with the next technical upgrade. Barring serious biotech or cybernetic alteration, we’ll always be the species that created—and necessitated—Hot Chicks with Douchebags. No one saw farther and more clearly than that site, really.

I wonder if it has by now evolved, quite logically, into a Donald and Melania fan site (and I wonder this as a guy who is not so petty as to, say, hate her postmodernist red Christmas trees).

To be clear, I’m not blaming traditional machismo alone for the incivility and one-upmanship described above. While it bears some of the blame, it’s alarming, near-simultaneously, to see Kamala Harris and other senators grilling a judicial nominee about his membership in the (all-male) Knights of Columbus, the largest Catholic mutual aid organization and exactly (as perhaps the Democrat senators well know) the kind of institution that, if encouraged, might’ve made the welfare state and thus government in general unnecessary. No wonder they view it as retrograde and suspicious. They are trying to protect the modern super-state from rivals, but they might as well return to the anti-Catholic suspicions of the days of JFK—who was a member, by the way. It’s a paranoid enough line of inquiry to make even an atheist like me root for the Christers.

William Shatner is also right to liken the excesses of the #MeToo movement to the purifying fanaticism of the French Revolution. I suppose he’s old enough now to care even less about whether he pisses people off than he used to. I hope he can say non-liberal things and still be permitted to cameo on the forthcoming Jean-Luc Picard TV series as Picard’s fellow Trekker Admiral Kirk (presumably after Kirk escapes the Nexus, I mean, while off-screen Spock and Romulus get spat back out of that unfortunate Kelvin anomaly, intact and ready to negotiate).

Speaking of France, it strikes me as taking exactly the wrong approach to avoiding political incivility when it does something like using CGI—in real time, which is unsettling—to subtly erase a word meaning approximately, uh, “Buzz off” from a protest sign in footage of recent Yellow Vest protests, leaving only the word “Macron” and pure blank white space, as if someone who likes the French president had shown up with a very simple message of support. Where are the deconstructionists to attack media lies when you truly need them, mon ami?

And just when you start thinking we must smash the lies of the big-media Euro-globalists and end their purges, you see footage of cult-leader-like right-libertarian commentator Stefan Molyneux attending a Polish nationalist march and weeping because the West now so rarely produces such displays of “quiet unity,” though quiet nationalist unity is not what I recall most libertarians signing up for. Maybe the irreverent snark I started out complaining about wasn’t so bad after all, if it helps us avoid the smothering pieties of bland establishment, angry left, and maudlin right. Or maybe from political lunacy there’s simply no exit and I should have admitted as much decades ago.