Why I'm Glad Bernie Got Interrupted 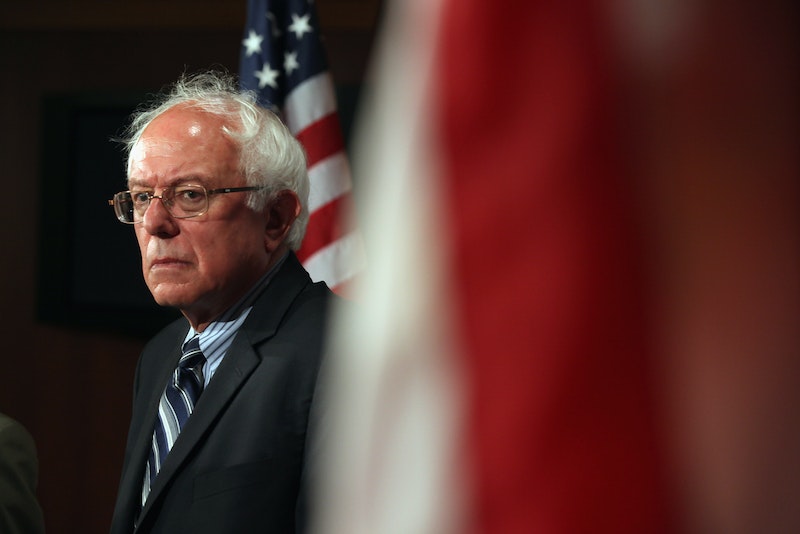 If Hillary Clinton is hit by a meteor tomorrow, Elizabeth Warren and Joe Biden will start up presidential campaigns, and Bernie Sanders still won't get anywhere near the Democratic nomination, much less the Oval Office.

Does that mean that Sanders campaign is pointless? Not at all: Sanders can energize the left and possibly force Clinton to make pledges on issues important to the progressive wing of the party. Politics is about communication, which means it's about symbols, which means symbolic candidacies can matter, especially when those candidacies are linked to real party constituencies.

But the fact that Sanders has no chance of winning is important to keep in mind when evaluating the more garment-tearing social media reactions to his appearance at Netroots Nation progressive conference over the weekend. Sanders and former Maryland governor Martin O'Malley, who is also running for the Democratic nomination, attended a public sit-down interview with Jose Antonio Vargas. The interview was interrupted by BlackLivesMatter protesters, including Tia Oso of the National Coordinator for Black Immigration Network, who insisted O'Malley and Sanders speak directly to the issue of police brutality. O'Malley responded, "Black lives matter. White lives matter. All lives matter"— dodging the central point of BlackLivesMatter, which is that racism makes black people in particular a target. Sanders, for his part, crankily referenced his past support for civil rights and added, "But if you don't want me to be here, that's okay. I don't want to outscream people." The protesters were not impressed.

On social media, some progressive supporters of Sanders criticized the protests for being chaotic, rude, and counter-productive. New Republic writer Elizabeth Bruenig, for example, commented on Twitter "Ah yes attacking Bernie Sanders, a surefire way to achieve......................something, I guess?" Hurting Sanders, many argued, damages progressives, and is misguided insofar as Sanders has a record of supporting civil rights initiatives, going back to the 1960s when he helped organize sit-ins. Attacking someone who agrees with you on the main issues is divisive and bad strategy, supposedly.

But again, undermining Sanders is only a strategic problem if he has a chance of winning the nomination—and there's no evidence he does. As Nate Silver pointed out last week at FiveThirtyEight, Sanders' popularity with Democrats just means left progressive politics are popular with Democrats. Hillary Clinton, however, is also very popular with Democrats, and she has overwhelming endorsements from party actors. The idea that Sanders would win if only BlackLivesMatter protesters wouldn't interrupt him is wishful thinking.

So the protests aren't really going to hurt Sanders' non-chances. But, like his campaign, they have symbolic importance. The most vital left grassroots movement of the last decade has been BlackLivesMatter. It has organized large-scale protests; it’s put police brutality on the national agenda. To solidify and advance those gains, BlackLivesMatter needs to force American political parties to engage with its agenda. Republicans are wedded to white identity politics for the forseeable future, so that leaves the Democrats.

Black Lives Matter has had some success in pushing recognition of its concerns: Obama and Clinton have both begun to speak about and make some promises and statements about criminal justice reform. But the point of activism is to get more; firmer commitments, more sweeping reforms, a more central place in the identity of the party.

You don't get any of those things by staying quiet. On the contrary, the best way to get politicians to listen, and to force them to deal with an agenda, is to frighten them. So BlackLivesMatter came to Netroots Nation, and it showed that its activists have a lot of energy, a lot of passion, and a lot of support. They forced Sanders and O'Malley to address their issues. In fact, O'Malley left the stage chanting "Black Lives Matter!" and said later, "I did not understand the tremendous passion, commitment and feeling and depth of feeling that all of us should be attaching to this issue."

Is that pandering on O'Malley's part? Sure. But the goal of party actors is in large part to get candidates to pander to them. It's to force politicians to address their issues and make promises about their issues, so when they're in office they’re under pressure to do something about those issues. Contrary to conventional wisdom, politicians generally try to keep their campaign promises, so forcing politicians to say that they'll do something about your issue matters. And even though Clinton skipped Netroots Nation, this high profile, highly publicized demonstration of the importance of BlackLivesMatter to a vocal constituency certainly increases the chances that police brutality will be a topic in Democratic debates and on the campaign trail.

I'm glad Sanders is running, even if his chances of winning aren't much better than mine are. And it's why I'm pleased that BlackLivesMatter activists are forcing Democratic candidates to listen to them.