Why I Loathe the U.S. Media

A dispatch from a Vietnamese industrial zone. 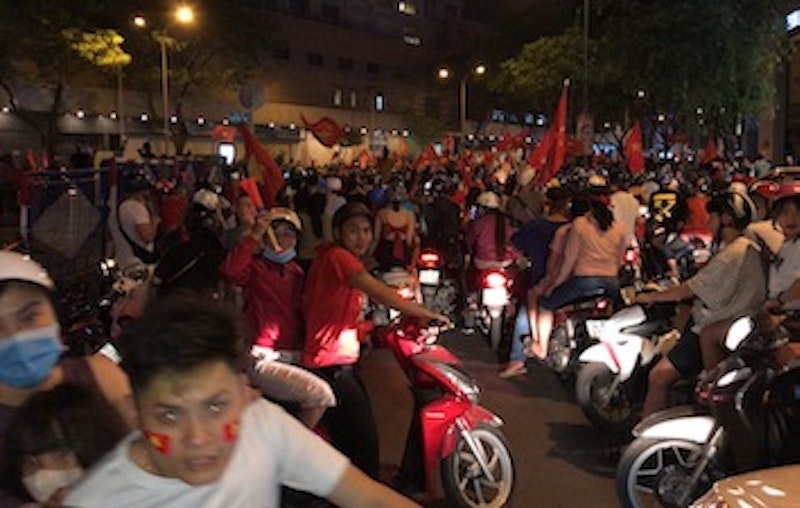 I’ve detested most of the American media for a long time, but I don’t think I’ve ever felt such extreme loathing as during a recent trip to Vietnam. I’d traveled there as part of a broader trip to the region, looking at, in a nutshell, the appalling conditions apparel workers face. I’ll leave it at that for now, because I don’t want to give away my story, which I reported from four countries.

Anyway, I know that if you’re an American journalist, especially one based in Washington and working for a “prestige” outlet, you’re already thinking: Boring.

That’s because most DC reporters make a lot of money and they’re entirely blind to the struggles and suffering of American workers—one reason these morons failed to foresee Donald Trump’s victory over Hillary Clinton—so naturally, the struggle of workers in Southeast Asia is a snooze. That’s despite the fact that many of those Asian workers are employed for miserable pay by factories producing goods that are exported to the U.S. market, and for big name American brands, so it’s not exactly a “foreign” story.

I’d gone to Ho Chi Minh City and the day I was so disgusted with American journalism, I was sitting in an industrial zone about 90 minutes’ drive outside the city. Vietnam is a very corrupt repressive government, similar to China in some ways as it still calls itself Communist even though it abandoned it for capitalism ages ago. And like China, the U.S. government pretends—often with the media’s ignorant support—that Vietnam is undergoing a political opening along with the economic one.

That’s entirely false. It’s a one-party state, freedom of expression and association and the media don’t exist, and dissidents who speak out forcefully can, and almost inevitably will, be imprisoned. All labor unions are controlled by the Communist Party, which is looking out for itself, not workers, who get paid badly and have almost no rights.

I was at a very modest but pleasant coffee shop in the industrial zone to meet with workers. Reporters are not allowed at factories and seeing them at home would endanger them. Even meeting at the coffee shop posed a risk to workers and many of them said they’d talk to me, but anonymously.

Without sounding self-aggrandizing, the meetings also posed a risk to me. There are virtually no white people in the industrial zone—I didn’t see one during my roughly four hours there—and the Vietnamese government runs a Stasi-like internal security program. I was told that my Vietnamese driver and fixer and I would pick up a tail very quickly in the industrial zone and though we probably wouldn’t be stopped, questioned or detained, it was not impossible.

I met with four female workers. A number of other workers didn’t turn up. Some were afraid and decided against it and others had to work overtime and couldn’t get out of their factories.

The stories they told weren’t entirely unsurprising, but were appalling tales of exploitation and flat-out wage theft. After the meetings we drove around the zone and went back to the city and drove by neighborhoods where Vietnam’s hideously corrupt political and business elite live. We didn’t have any problems with police and to my knowledge we weren’t tailed, though I’m not certain of that because the security presence is pretty obvious and I took hundreds of photographs on my phone, including shots of government buildings flying the red-and-yellow Vietnamese flag side by side with the hammer-and-sickle.

In any case, as we were sitting at the coffee shop and waiting to hear if more workers would meet us, I became disgusted—far more intensely than I usually am, which is quite intense—thinking about the pathetic state of Beltway journalism. I don’t mean to suggest that I did anything extraordinary or took extreme risks, all I was doing was reporting first-hand in a foreign country.

To me, it’s a privilege to do that and reporting and traveling are two of my favorite activities. Meanwhile, most Washington (and U.S.) journalists can’t be bothered to report. They’re content to whine and opine about Trump's latest Tweet or how the President is so uncouth that he eats well-done steak with ketchup. (That’s admittedly an old and brief media obsession, but one I’ve always found mind-boggling.)

Our “reporters” think that work is attending a press conference and asking the same question everyone else does, and, in a dream scenario, grandstand like CNN’s revolting Jim Acosta and become a media hero. An “interview” doesn’t require meeting a source and having a serious conversation; no, that just means sending an email with a question or two to some friendly think tank dweeb (living in the same DC bubble) to have your point of view confirmed.

Obviously a lot of great reporting is done by the media, including the Washington media, but what’s shocking is how little of it is good, and how little effort most of it requires. Even “investigative” reporting is largely leak-driven or derives from a dossier handed over by an opposition research firm working on behalf of a powerful private party.

Look at the whole Panama Papers affair, which won fame and prestige for the International Consortium of Investigative Journalists. It produced some good reporting but all of it originated and was shaped by a leaker—still unnamed—who surely was not altruistic, but had a clear agenda. No matter how good some of the resulting reporting, ICIJ, in short, was happily used. (Incidentally, I reported on Mossack Fonseca, the firm at the heart of the Panama Papers scandal, nearly 18 months before ICIJ did, in a story for VICE. I reported from Panama City, New York, Washington and Las Vegas. I received no leaks and when you think about what I was able to do, and compare it to what ICIJ did with vastly more resources, time and personnel, and in collaboration with multiple international news organizations, their effort is pretty pathetic.)

The major reason the media is so anti-Trump is not because of some principled opposition to his policies (and most big-name reporters surely cleaned up on his tax cuts) or his completely vile personality. It’s because he broke up their Beltway club and even took away their pathetic White House Correspondents Dinner.

There are other reasons they hate him -- anti-Trump analysis requires no travel, no reading, no research beyond his mean tweets, and you can grind out your takes all day long without leaving your hizzy, notes my friend Oliver Lee Bateman -- but breaking up the club is what they find unforgivable. So they bash him relentlessly, have dummied up the idiotic and false Russiagate narrative to keep their clicks and TV time up, and breathlessly “report” on his tweets as if this were actual news, and not the President merely yanking their chains.

Meanwhile, smart, inquisitive journalists can’t find steady work and struggle to pay bills. Thankfully, I continue to make a living and very occasionally, not nearly as often as I like, have the honor to report from overseas and learn something new and try to explain what I saw through actual journalism.