Baynard Woods sees the worst of himself in the GOP nominee. 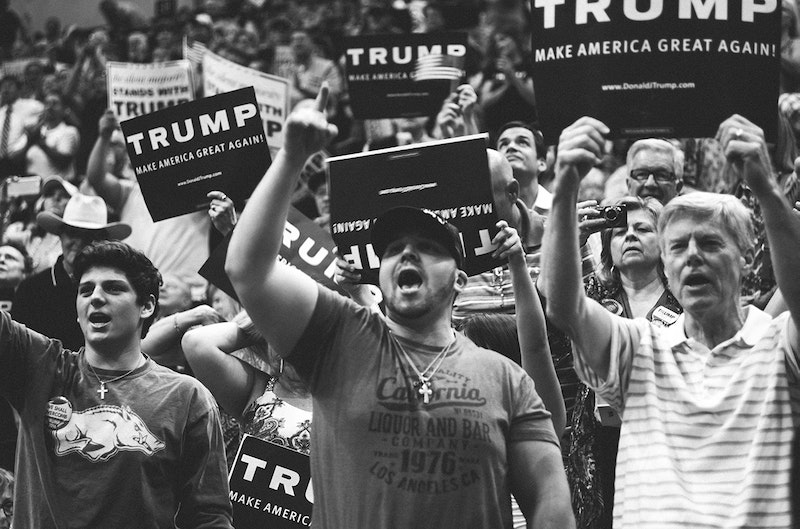 Compared to this year’s election, the combustible 1994 midterms seemed so clear. There were far fewer polls, a nascent social media, and a robust print media, most reporting with dread that Newt Gingrich’s “Contract With America” might lead to sizable Democratic losses. I placed a lot of small wagers two weeks before the election, betting that the GOP would win the House—and the odds I received!—and that Mario Cuomo—the “conscience” of the Democratic Party—would lose his New York governorship to nobody George Pataki. (Cuomo screwed himself by not running against George H.W. Bush in 1992, an election he’d have won.) On election night, as I watched the returns come in, it was like winning a huge hand of poker and sweeping up the chips. A week later, in the Village Voice, a bewildered Richard Goldstein asked, “When did conservatives become cool?”

As noted previously, I’m not putting down a nickel this year. There’s too much static, too many daily polls, and an atmosphere of craziness and vitriol that makes it prudent to pass on the betting pool. Nonetheless, you’d have to be daft to believe that Donald Trump can pull off a Harry Truman upset; the only question is how badly his ramshackle and ugly campaign (Hillary Clinton’s is abysmal as well, just more muted) will affect the makeup of Congress. There’s almost no way the Democrats can reach 60 seats in the Senate, even if Marco Rubio, Pat Toomey, Ron Johnson, and Richard Barr go down, but the House—despite the gerrymandering that benefits both parties—is a different story. The prominent political analysts, say Larry Sabato and Charlie Cook, are saying it’s “unlikely” Democrats can win the House, but I’m not buying it. A depressed GOP turnout plus a revolt against the status quo says, at least to me, that Nancy Pelosi takes the gavel again in January.

I can’t support either candidate, since a Clinton mandate could lead to a nightmarish European Union-style of government (with more reliance on hourly polls), and Trump is just too incoherent on foreign and domestic policy, with the exception of his clear and ugly xenophobia. It’s lose-lose, and, unlike my son Nicky, who wrote an article a few weeks ago expressing a desire that the campaigning continue on and on, if only to extend the bloodletting, I’ll be glad when it’s done. Then I can play political ostrich for a spell and hope that Boston’s Dave Dombrowski makes smart deals to improve the 2017 Red Sox.

But let’s continue, briefly, on just how weird this election is. The other day on Facebook I came across a Salon article by Baynard Woods, a hard-working Baltimore journalist, and by all accounts a very good guy, who’s worked at Baltimore’s City Paper, distinguishing himself—as did others on the staff—with excellent coverage of the Freddie Gray protests two years ago. He’s a dogged writer, now appearing in The Guardian and other outlets, and though we don’t agree on a lot politically, I admire his passion. Yet his take on Trump strikes me as almost as loony as the candidate himself.

Woods writes: “Donald Trump is, in effect, white privilege and patriarchy embodied. He is us, white dudes. He is our sense of entitlement incarnate. Sometimes, when I hear him rambling on in an argument, attacking people rather than making points, sinking to the lowest common denominator, I hear myself… We can recognize that justice is not only that which benefits us. We can see the way [Trump] treats other people and holds it up as a talisman against all those needy, selfish, stingy, spoiled, arrogant, sexist, racist, homophobic, xenophobic idiotic aspects of ourselves that we carry around each day.”

I’m a “white dude” but, unlike Woods, who’d be better off talking with a priest or meditating, I don’t see much of Trump within myself. I doubt that the legions of Republican journalists and Big Feet who’ve refused to support Trump, from Millennials to Boomers, have lashed themselves 40 times to pay penance for harboring deep-seated Trump qualities. But while Woods is at it, he might also take to the torture chamber for supporting Clinton, who’s certainly “arrogant” (her sense of entitlement in becoming the presumptive Democratic nominee) and “spoiled” (accepting ludicrous sums from huge firms for boilerplate speeches). Not to mention the hypocrisy she’s shown in accepting money for the Clinton Foundation—kind of a shell game—from wealthy men abroad whose own countries treat women like dirt.

It’s not my place to give advice to the progressive, feminist Woods, but man, lighten up.