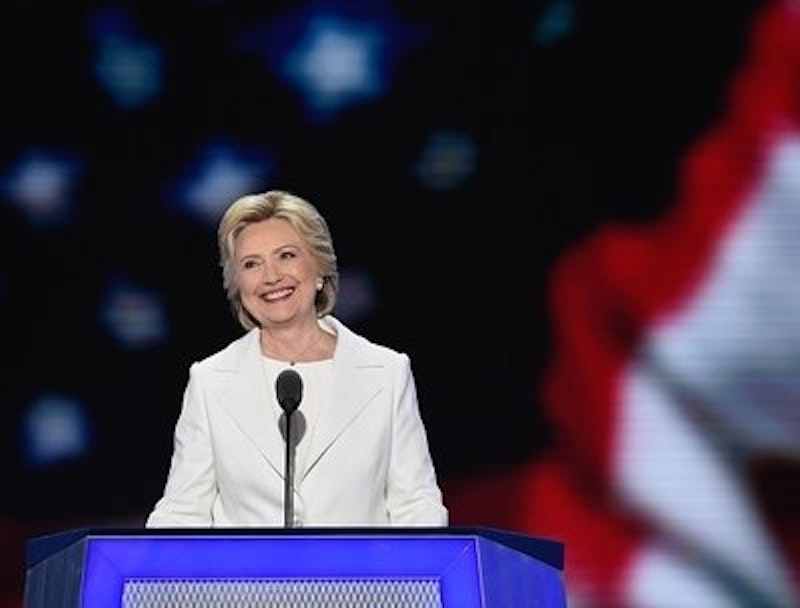 Put aside the presidential candidates for a moment and consider them more as proxies for the real issues in this election that are not on the ballot but mean more to Americans’ lives and livelihoods than who groped and who deleted. The candidates represent more than who will govern for the next four years. They’re stand-ins for political parties and differing philosophies of governance, economics, social services, residency requirements, the judicial system—everything we get in return for the tax dollars we send to Washington and then some.

With two weeks before the election, there’s growing talk of a huge mandate as Hillary Clinton seeks to expand the electoral map beyond traditional blue states and into normally Republican and red territory which could drag along down-ballot candidates. Clinton may not run the table, but the safe betting for now is that Democrats will re-take the Senate and winnow GOP margins in the House. But mandates are elusive, and on Capitol Hill there’s only one that counts—218 votes in the House and 60 in the Senate. With those in hand, a lot can be accomplished. Without them, little gets done, as we have witnessed for the past six years. Besides, Clinton’s distrust factor is high with the public and, depending on outcomes, could translate into Congress’ attitude toward her. What’s more, many progressives fear that Clinton will revert to moderation once elected. Trump’s ability to get things done is even more questionable and he has, on occasion, professed a menacing authoritarian streak. There is no question, though, that the next president’s first order of business will be to get Washington working again with, perhaps, the benefit of a newly chastened Republican party. Here is a sampler of the new president’s to-do list:

The Supreme Court—The next president might appoint as many as four Supreme Court justices, which could shape the direction of the nation’s highest court for a generation or more. In the court’s hands are such combustible issues as gun control, women’s reproductive rights, same-sex marriage, the shape and coloration of congressional districts, immigration and the authority of the presidency itself. The Supreme Court has only two functions—to interpret the Constitution and to review laws. It’s on that first point that much of the controversy about the court turns.

The Supreme Court has been one person short of its full complement of nine since the death of Justice Antonin Scalia and the Senate’s refusal to consider President Barack Obama’s nomination of Judge Merrick Garland to fill the crucial vacant slot. (Clinton has said the Senate should act on Garland’s nomination but hasn’t said whether she’d reappointment him if she’s elected.) The court had skittered along on a delicate 4-4 liberal conservative balance, with Justice Anthony Kennedy often the deciding swing vote. Donald Trump has said he will hue the conservative line—upholding the NRA’s Second Amendment positions on gun ownership and repealing Roe vs. Wade abortion rights. Trump had released a list of conservatives he’d consider for the court. Hillary Clinton promises to follow the liberal path on those issues as well as LGBT rights and in appointing liberal justices. There are also 99 federal court vacancies with 59 appointments waiting for action from a reluctant Republican Senate. The key question is whether the Republican Senate will allow the nominations to go forward after the election to avoid the risk of Clinton making even more liberal appointments than Garland, et al.

Social Security—Social Security has been disparaged as the greatest transfer of wealth in the history of the world, one generation paying to support another with little expectation of the system to provide the same generous subsidy when their time arrives. Social Security’s broke and in need of dramatic repair, say Republicans who’d like to privatize the system and turn it over to Wall Street. Social Security requires a modest tweak so the system can be expanded to provide boarder benefits to seniors, argue progressive Democrats. Yet America’s economy would probably collapse without Social Security. Social Security has rescued America’s elderly from poverty. About 60 million older Americans receive monthly checks averaging about $1200 and change, while another 10 million receive other kinds of assistance under the system. In all, Social Security’s total annual payout is $1.3 trillion, or 8.4 percent of the $16.3 trillion GDP. So, that’s all money in motion that’s paid into the system by wage-earners and recirculated through cash registers to help keep the economy humming. Clinton, prompted leftward by Sens. Bernie Sanders and Elizabeth Warren, now favors expanding benefits. Trump claims his tax cut plan would spur economic growth and the trickle-down of newfound wealth would prop up entitlement spending.

Immigration—Let us hope, beyond expectation, that the next administration can resolve the immigration dilemma and end the nagging debate once and for all. The issue has bedeviled the country for at least 16 years, through two administrations, and shows no sign of easing as long as crowds are whipped into a froth with promises of a wall and a one-way ticket back home. There are at least 11 million (who’s bothering to count anymore) undocumented aliens, or illegals, if you prefer, hiding in the shadows in kind of an underground economy and second-class life. Face facts: they’re not going anywhere. And no wall will be built. President George W. Bush tried and thought he had a deal to resolve the debate. So, too, did President Obama, who in at least one significant instance went around Congress with an executive order only to have it bounced back by a federal court. Many states have passed “Dream Acts” of their own. So here it is again: Trump wants a border blockade. And he wants to ship everyone who’s here illegally back to their land of origin and start the line of legal entry all over again, with severe screening of Muslims. Clinton wants to establish a pathway to citizenship, which detractors say is a euphemism for amnesty.

Affordable Care Act (Obamacare)—Obamacare is the signature issue of its namesake’s eight years in office and the most significant prop of the president’s legacy. Under Obamacare, no one can be denied health care coverage because of a previously existing condition, and kids can remain on their parents’ policies until age 26. There are now 11 million more Americans with health care coverage than before Obamacare, and the cost of health care has slowed greatly though still rising. Essentially built on government subsidies, Obamacare is the closest America has come to universal health care without actually calling it that. Obama actually preferred a program of Medicare for all but couldn’t get it through Congress. That said, many private insurers are pulling out of the state exchange system because of huge financial losses, and additional government funds may be needed to rescue the system. Trump claims Obamacare is a “disaster” and that he’ll replace it with something better, although he never says what. Clinton says Obamacare is essentially sound but needs some tinkering. If Clinton takes another cue from Sanders and Warren, she’ll no doubt lean to Medicare for all, which was Sanders’ primary campaign position.

Free College Tuition—Student debt is a one-note campaign issue as well as a rallying cry among millennial voters—as far as they are willing to be involved in an election that they seem just as content to sit out. The total amount of student debt in America is a staggering $1.2 trillion, second only to the amount of money owed on credit cards. And the average student graduated this year not only with a diploma but a debt load of $35,000. Once again, those tormenters on the left, Sanders and Warren, have been in the vanguard on the issue of student loans, especially Warren who has castigated banks that profiteer from the debt burden. Clinton, therefore, is late to the cause, adopting Sanders’ primary cry of free tuition at state colleges and universities. Trump, who wants to shred the Department of Education, has proposed capping student repayments at 12.5 percent of the borrower’s income with loan forgiveness after 15 years. This, along with the Republicans’ idea of getting the federal government out of education, is seen as a boon to bankers.

The Environment—This life-or-death issue begins and ends with the planet we inhabit, from climate change to the rising tides that will eventually swallow our coastlines and everything precious on them unless we reverse the mad dash toward Apocalypse. It is, essentially, a debate between science-believers and science-deniers who often use the pretense to conceal other motives. Much that is done to protect the environment is accomplished by executive, or departmental, action, to the consternation of conservatives and free traders who believe government should have no active role except defense, i.e., libertarians. Pipelines, coal mines, fracking, preservation of wildlife and forest lands, most notably, our national park system, all fall under the purview of the environment. Clinton made a vague reference to eliminating coal mining, which she then translated into a national policy proposal of ending reliance on fossil fuels. Trump wants to revive coal mining as a job-creating endeavor and trash the environment if that’s what it takes to make money.

The Economy—This bread-basket issue involves every aspect of life from pre-K to the tax code, from job training to economic stimulus, from wage equality to investing in the nation’s infrastructure and finally, the all-important growing economic disparity. Economic growth is stuck at about one percent. Inflation is non-existent. Income growth, in today’s dollars, is in negative territory, somewhere around what the average worker was earning in the 1990s. Robust is a word that’s no longer used to characterize productivity. Everyone’s life depends on the economy even though they approach it very differently. Clinton’s direction is an expansion of the accepted progressive Democratic cradle-to-grave policy of government’s-there-when-you-need-it. And Trump lives in the Republican echo chamber of Reagan-era trickle-down economics and the theory that tax cuts for the rich will benefit everyone.