Over the Cliff With Paul Ryan and Mitch McConnell

But not Donald. Not if he can help it. 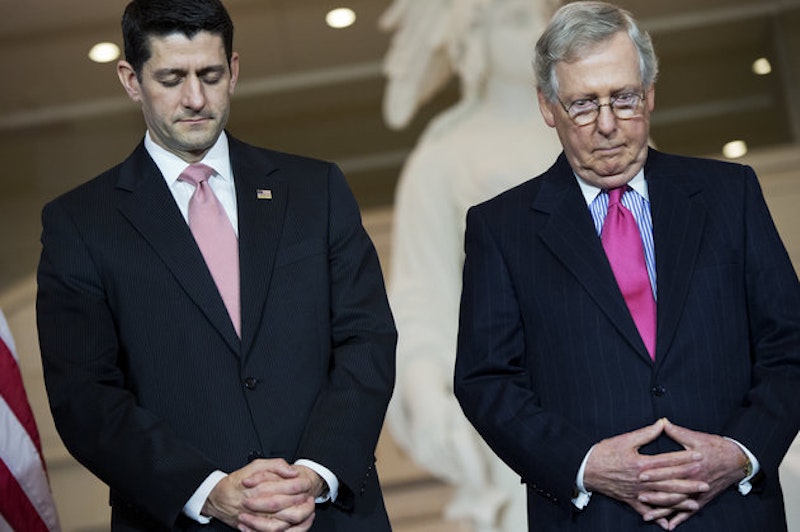 Then the two of them will walk in front of the cameras and tell America that it’s official, that Donald Trump just lost the election and they’re the ones who say so. McConnell and Ryan will get to be the face of defeat—that’s as far as normal Republicans are concerned. Trump fans will figure something worse, that their man lost because McConnell and Ryan said what they said. The two of them rushed on the air and helped the media complete its lie. They’re traitors.

Many Trump fans are Republican voters: 13 million or so, and this spring they crushed Marco Rubio and Jeb Bush. Republican candidates and office-holders want to stay clear of that kind of grief. In this case, staying clear will mean staying away from McConnell and Ryan. Yes, the two men are the Senate Majority Leader and the Speaker of the House. But Trump fans don’t care. Republicans had just better shun their two legislative leaders, that’s all.

So the Republican Party risks serious dislocation after November 8. That’s along with the pain that usually comes from getting beat. On the other hand, McConnell and Ryan could keep quiet. They don’t have to go out to the cameras. They can let their presidential nominee take the lead on the matter. The Republican Party can become known as the party that’s election-skeptical, the one that says the results don’t count if the party loses. Great. Since Trump became a democracy skeptic, GOP politicians have been rushing out statements assuring the world they’re for election results, not against them. They don’t want that anti-democratic cooties, no more than politicians wanted socialism hanging over them back in the old days.

On the whole, some Republican has to step on stage election night and let America know that the boat isn’t going to be rocked, let alone have its planks kicked in. Let people know the Republicans like elections too. Reince Priebus? But McConnell and Ryan would still have to issue statements, which is bad enough. Unless Trump lets them off the hook. Maybe he’ll step out and do the job himself. Break the news to his fans, eat crow, and accept the results of his failed efforts. Not leave the wreckage for somebody else.

But McConnell and Ryan better not count on it. As of November 9, by-standing politicians may have to pick a side: is the U.S. a democracy or is Trump a liar? For Democrats this will be easy. For Republicans it’ll be excruciating. Trump has come up with the ultimate wedge issue. I think this was by accident, just by flapping his mouth. A smarter, less reactive man would’ve said in the debate that he’d keep an eye out for voting irregularities. If he’d wanted to be cute, he could’ve waxed pious about how the other side ought to be doing more to reassure him, given the serious accusations, etc. He could’ve been aggressively full of it without broadcasting that his only concern was whether the vote went his way. But he blatted out his true attitude. This is typical of Trump. Most of the time he lies. But when he’s honest, he’s honest the way a guy farting is honest. Yes, that really was inside him, and now it’s in the air.

The leaders of the Republican Party find themselves dreadfully wedged because Trump carries on the way he does. Just because he’s an overgrown baby with no control over himself. Just because he’s a repellent person. So much of the Democratic case comes down to quoting Trump and pointing at clips of him. Clinton dwells on his whining, foul mouth, lies and insults toward women. The Republican electorate took a long—a painfully long—look at this man. They decided he should be president.

“Blood coming out of her wherever,” Trump said 14 months ago. Five months ago, when Trump was clinching the nomination, a Republican operative wrote, “It turns out that what revs the GOP engine is repellent to everyone else.” Now Ryan and McConnell must deal with that truth. Jump, boys.