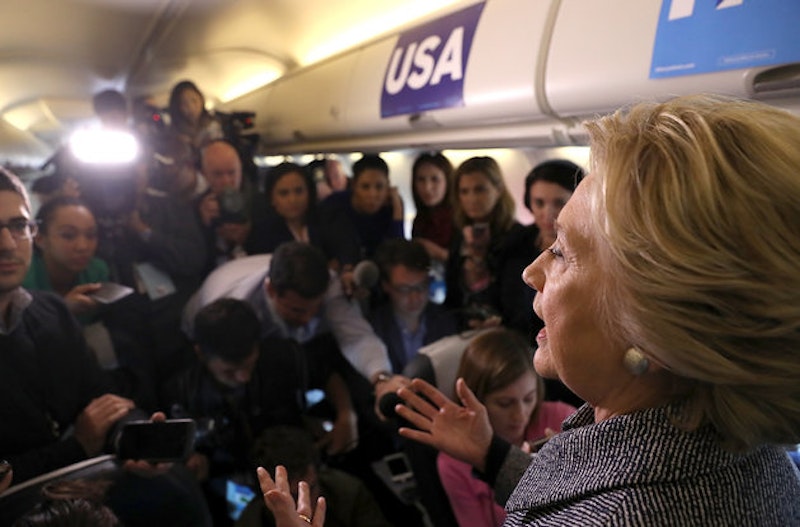 “For Clinton, the move is opportunistic and has governing implications.” The move in question is that Hillary and the Democrats are trying to elect more Democrats. I suppose the copy’s point is that new chances just arose, what with Donald Trump sinking, and that Hillary’s people are jumping on those chances. An odd thing to explain, of course, something on the order of “Footwear normally is used to protect and sometimes adorn the lower extremities.” The rest of the passage also sounds like the authors were told their readers couldn’t zip pants or count small change.  For example: “She would almost certainly govern more efficiently with Democratic majorities.” Yes, I bet.

Using “opportunistic,” the copy sounds like it’s saying Hillary’s doing something false and crafty when she tries to elect more Democrats. I bet that isn’t the idea, because nobody could be so dumb. The piece’s writers and editors are being klutzy, which is different. They haven’t thought through how the words go together, and the result is a false impression. “Opportunistic” can mean, just barely, a focus on opportunity, as opposed to a focus on opportunity at the expense of consistency, principle or the long view. Good enough for some schmos trying to sound analytic.

The kicker’s that the word seemed natural enough to them because it was in a sentence with Clinton. Sorry, Hil.

Ohio aligns. “A month ago, Ohio seemed to be aligning as a Trump stronghold, as its large bloc of white working-class voters responded to Mr. Trump’s economic populism and America-first message.” Why “aligning”? After all, the state isn’t coming into line with other states, not even metaphorically—other potential Trump strongholds aren’t mentioned. Did the original have “shaping up” and some editor enforced a rule against two prepositions in a row?

Wait a second—“emerging.” Simple enough. Why not use “emerging”? I suspect because “aligning” has a severe lash to its sound, something astringent that tricks simple minds into feeling the presence of incisive thought.

For that matter, why “stronghold”? Try “A month ago, polls showed Mr. Trump leading in Ohio, as its large bloc,” etc. The word-pictures our campaign reporters must summon!

Looking up the word, I find that “inverse” is less than precise in its meaning. “Something of a contrary nature or quality,” it covers both “opposite” and “reverse.” The opposite of “Gorillas love bananas” is “Gorillas hate bananas.” The reverse is “Bananas love gorillas.” The inverse is either of these things, whatever.

Odd thing. “Feminist icon Gloria Steinem also held a rally for Clinton on Friday in Salt Lake City.” All right, the sentence is fine. It’s the news that’s odd. Why do people in Salt Lake City want to see Gloria Steinem? Why is this something Hillary Clinton wants and not something she’d avoid? The first woman president (I mean, most likely) has the world’s highest-profile old feminist campaigning in Mormon land. That extra wrinkles makes me think I’m looking at a science fiction moment, a give-away by the times as to how much they’ve changed.