When Hillary Sandbagged a Senator 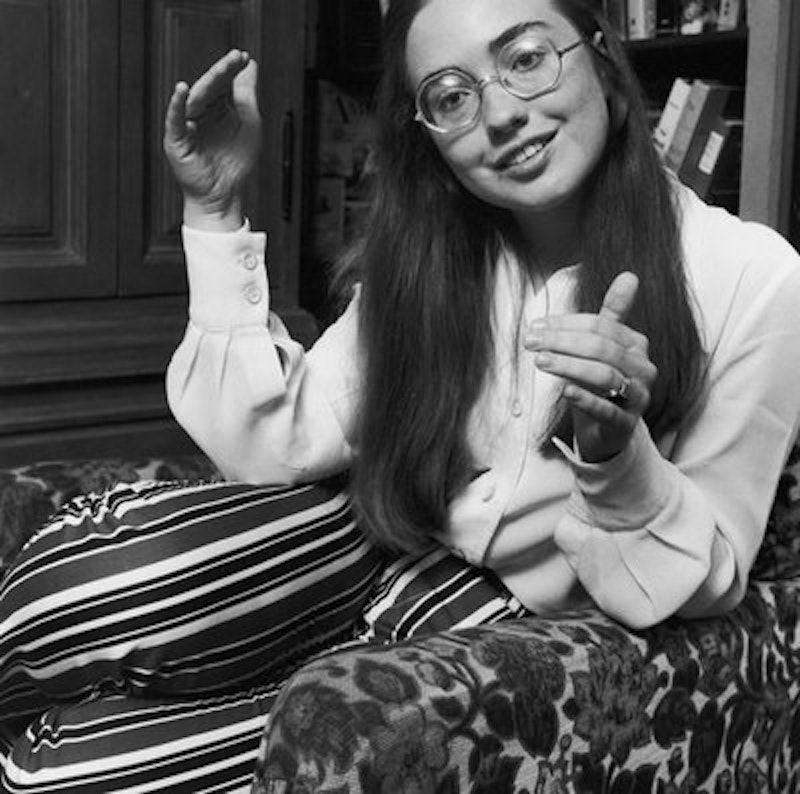 The poet Robert Pinsky was on hand when Hillary Rodham, a young woman of 21, dressed down a U.S. senator. The occasion was the graduation ceremony at Hillary's college, where the senator and the coed both gave speeches. Hillary's speech was “pretty standard” for the times, Pinsky says, but her sandbagging of the senator was remarkable. She took over the room and did it without raising her voice. “The poise, good manners, and fearless cogency of those improvised remarks gave them not just rhetorical power, but authority,” Pinsky writes (emphasis his).

Pinsky doesn't remember much of what she said. It was her savvy and nerve that hit him, “the shrewdly controlled way she formulated her objection to Brooke's performance.” Brooke was Edward Brooke of Massachusetts, a liberal Republican. Pinsky seems to think he both had it coming and didn't have it coming. Brooke used his Wellesley speech to say the nation's protesters should cool it because reform was already happening. “Pusillanimous” is the word Pinsky uses when discussing the speech. On the other hand, Brooke did his share of good. “He co-authored the Fair Housing Act, and he was actively pro-choice,” Pinsky says. “In other words, with the eyes of 2013, Brooke can be seen as a heroic fantasy of courage and wisdom.”

True, and perhaps he should have been better treated back then. After five years of riots, less than 10 months after the Democratic convention blew up, he thought we could use some calm. For that he got mau-maued by the head girl at Wellesley. What did she tell the senator? That he was playing it safe, that his speech didn't mention Vietnam or urban decay, and that he used a number to talk about poverty. The senator had said we were making progress because the poverty rate was down. “That's a percentage,” Hillary told him, and Pinsky says she spoke with “polite disdain.”

Pinsky admits that the “present Hillary Clinton might wince at young Hillary's scorn for percentages.” After all, percentages come in handy when you're trying to size up social problems and address them. The back-then Hillary wanted something else: a show of emotion, otherwise known as a show. The way she made this trivial request brought her a seven-minute standing ovation and a feature spread in a national magazine. This was Life, where eight million readers got a look at the Now Generation girl with something to say.

The photos are hypnotic. Hillary's slacks aren't just striped, they are striped on top of striped, and she's wearing tortoise-shell glasses. This is Hillary as a late-60s chick. She's a special variant, the chick with big thoughts—hence her giant eyeglasses. But she's still a flower child, meaning a fresh, daisy-like representative of today's bold challenge to the conscience. You can tell by the hair, which hangs long and free.

Pinsky writes that the girls at Hillary's college had long hair and were a bit special about their keenly honed, uncompromising natures. “Nobody here would marry a lawyer!” he quotes one as saying during class, and Pinsky adds, “no one in the group disagreed.” It was the same class where he first heard Hillary's name: “'Hillary Rodham!'” said a pretty young woman with long hair—just the name—and the other pretty young women with long hair nodded and murmured their recognition.” Pinsky says the girls spoke with “envy and superiority, something that was close to awe and something else that was not quite disdain ” Pinsky suggests that the girls knew Hillary was “ahead of them on a track they denied,” meaning the track where you apply to Yale Law School.

By this reading, the flowers did not consider Hillary one of them. But, looking back, it seems like the go-getter, the class grind, pulled off the moment the other girls all dreamed about: the face-him-down moment when an adult male got his schooling. The girls had spoken of Hillary with “not quite disdain,” and Hillary treated the senator to a helping of the real thing—damn, he shouldn't have said that about the poverty rate! Hillary indicted the poor man as less fine and bold than his audience. The girls and their families gave Hillary her standing ovation.

Mysteriously, the senator who got knocked down was black. This seems too good to be true, but in 1969, when her generation of young white women started to rise, reality managed to produce a black senator for ritual demolition. Of course, Edward Brooke—“smooth, handsome,” “carefully middle-of-the-road”—would later be reborn as Barack Obama and have his revenge. Back in the turbulent 60s, he was seen as “blandly competent,” Pinsky says. He still is, even in his Obama form, but he's managed to get some things done.