Who Will Be Maryland's Next Governor?

Brown is clearly the choice of the Democratic party establishment. 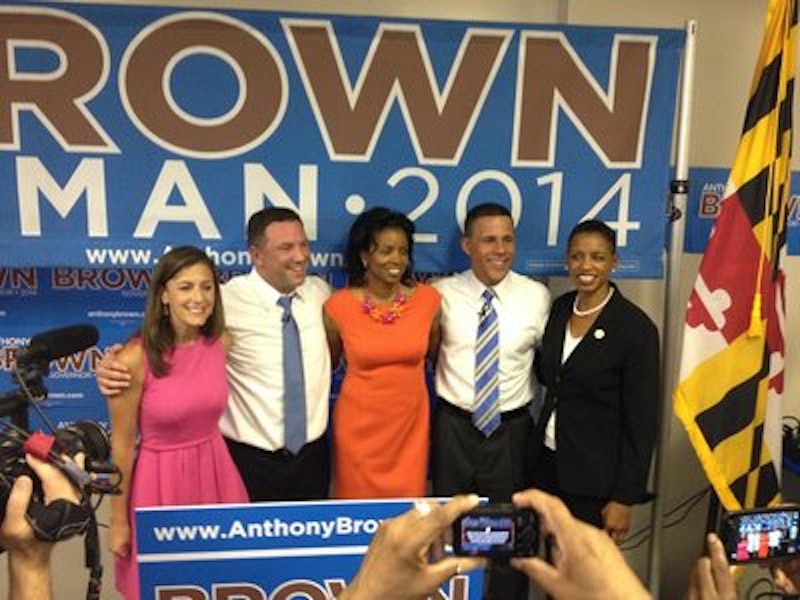 The three building blocks of every successful political campaign are money, media and organization. It’s possible to win with any two as long as one of them is money. Organization begets money, and money begets organization. Media does its insidious work as campaigns unfold. But it still takes money.

Maryland Lt. Gov. Anthony Brown (D) is assembling his campaign the old fashioned way. He is collecting endorsements and adding bold-face names to his Rolodex as an early display of strength. The early-bird strategy is to try and pressure opponents out of the race or into a hapless appearance of weakness for lack of friends and supporters. And in politics, as in the marketplace, money follows strength. Or else why would he do it this way?

For their parts, Attorney General Douglas Gansler and Del. Heather Mizeur, the other big-foot Democrats answering the casting call, are biding their time on the organizational end of the campaign and hoping the calendar will work in their favor. They’re waiting for voters’ attention spans to return from summer break. Gansler and Mizeur are relying more on issues than on lists of names when, in fact, issues matter less in primary campaigns than organization.

Brown is clearly the choice of the Democratic party establishment. Brown, so far, has the endorsements of Gov. Martin O’Malley, his boss and the man he hopes to succeed by breaking the 44-year jinx on the state’s number two office-holder; Baltimore Mayor Stephanie Rawlings-Blake, a certified ally of O’Malley; Reps. Elijah Cummings and Donna Edwards, the state’s two black members of Congress; and a list of 70 county officials that was released at the Maryland Municipal League’s annual conference recently in Ocean City. Brown’s biggest score, of course, was persuading Howard County Executive Ken Ulman to join his ticket in the understudy’s role instead of running for governor. As a bonus, Ulman is Jewish, which could cut into Gansler’s support within that heavy-voting community.

Brown also served in the House of Delegates as majority whip where he cultivated lasting friendships. These are the folks who get out the vote at the precinct level not only for themselves but for friends and ticket-mates as well. The intramural debate continues over whether endorsements bring anything to a campaign other than a flash-in-the-pan announcement headline. The argument centers on transferability of support. On balance, it’s better to have endorsements than not. The true value is in their addition to a candidate’s voter delivery system by hoping to broaden the extended family on election day.

So any short-term tactic is designed to gather support and to soak up money while the long-term strategy is to broaden the middle wide enough on issues so as to leave little room for opponents at the margins.

Gansler has announced that he will announce in September. He’s hired a campaign manager and delineated a series of issues that will flesh out his candidacy. He has a staff of more than 400 assistant attorneys general spread throughout the state’s bureaucracy to serve as kind of an in-house advisory group as well as an intelligence gathering network. It’s one of those quirks of Maryland law that the attorney general represents both the executive and legislative branches of state government. In private practice, that would be an unforgivable conflict of interest.

And at Gansler’s side is David Paulson, his communications director, a former Maryland Democratic Party spokesman and apparatchik from the first O’Malley campaign. Isaac Salazar, another former Democratic party operative from the O’Malley years, has joined Gansler’s campaign as digital director, a position of growing significance because of the influence and immediacy of social media.

Mizeur, outspokenly gay, is hoping that recent court rulings and a massive shift in public sentiment toward gays will propel her candidacy on a wave of goodwill and acceptability. She no doubt will receive both financial and moral support from national gay rights organizations as well as women’s groups. Both she and Gansler are from Montgomery County.

There is also a secondary and friendly rivalry occurring within the Brown and Gansler campaigns. Stephen H. Sachs, former Maryland attorney general, once served as an assistant U.S. attorney to U.S. attorney Joseph D. Tydings and later as Tydings’ campaign manager when he ran for the U.S. Senate in 1964. Tydings is spearheading Gansler’s campaign for governor as he did Gansler’s run for attorney general. At the same time, Sachs is chairman of Brown’s campaign for governor. Brown was Sachs’ protégé at the powerhouse Washington law firm of Wilmer Hale just as Sachs was Tydings’ protégé in the U.S. attorney’s office and beyond.

It’s obvious from Brown’s early endorsements that he is relying heavily on the black vote to reinforce his candidacy. His electoral strength lays in central Maryland and the half dozen jurisdictions along I-95 that make up the backbone of the state’s Democratic party. In Baltimore, for example, Rawlings-Blake commands the vote of the black matriarchy that is the largest and most reliable voting-bloc in the city. In the 2012 presidential election, minorities voted in greater numbers than whites for the first time. Maryland has a black population of 33 percent, the largest outside of the Deep South, as well as a rapidly growing Latino population. Baltimore is 69 percent black and Prince George’s County, Brown’s home base, is 74 percent black.

Brown brings to the race an initial account of about $1.2 million. By enlisting Ulman to the ticket, Brown added another $2 million to the pot that Ulman had stashed for a run of his own. But Gansler is sitting on reserves of more than $5 million, a sizeable slush fund that, for openers, could cause serious mischief. (The newly increased campaign contribution limits do not go into effect until after the 2014 statewide elections.)

The only ones who get rich from political campaigns are television stations and the consultants who parachute into Maryland for the duration and then move on to the next state to do it all over again. The journalist Ambrose Bierce wrote in the Devil’s Dictionary that “Politics is public service for private gain.” Maybe he was right.