America, Do You Even Want to Survive? 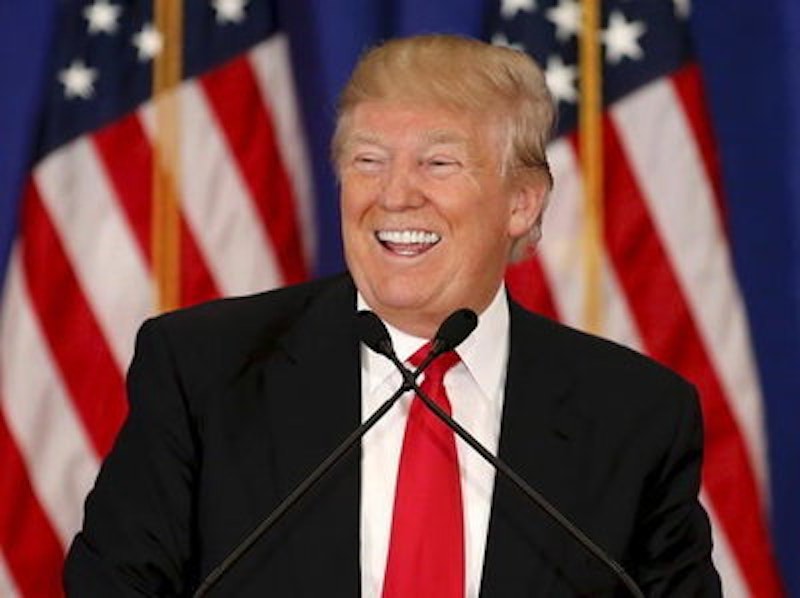 He’s mentally unstable. You notice that? Now he’ll be president. He’s already said that he assaults women because he can. He likes dictators because they kill lots of people. Now you’ve put him in charge.

Oh yeah, the emails. And, like, Hillary’s maid printed out some of the emails? Is that bad? Maybe, I don’t know. Donald Trump’s already said NATO’s no biggie, we can let those countries go hang if they don’t do us right. And he’s already said it’s no big deal if some countries far away have a nuclear war. As security threats go, a president in that frame of mind is a lot worse than a president who trusts her maid.

The accusations against Hillary have added up to 90 percent bullshit and 10 percent too bad. I’ve read through my share of articles with scary headlines about her misdeeds. They remind me of the news coverage about Saddam Hussein’s nuclear weapons program. The more I read of those articles, the harder it was to believe there was any such program. Of course, back then the Bush administration hyped the press into believing nonsense. This time the press hyped itself. Half of American voters then decided they were voting against evil by voting for the man who rips off suckers and makes fun of the handicapped. Okay, not quite half.

America’s no longer a stable country. I’ve been saying for a while that it was headed for instability. Looks like it’s arrived. In a stable country, people don’t vote for the guy who wants to put his political opponent in jail. They don’t vote for the guy who figures election results are no good unless he wins. They don’t watch a political party sabotage government and then put that party in charge. They don’t make a TV star president, and they don’t elect a man who likes dictators. But I already mentioned that.

I’m lucky enough to live in a foreign country. I never thought I’d say that—“lucky enough” not to live in America. I chose Montreal because it suits me, not because I thought Canada was superior to back home. As far as I was concerned, people up here who wanted to go live in New York or California or Mississippi could have perfectly good reasons for doing so. Now I think they’d be walking into a mine that’s in mid-collapse.

Years ago I was friends with an old lady from Russia who spoke funny English. She came to the U.S. as a visitor, just to spend the summer with family who had come over. Then Russia had its revolution and she could never go home. One day I reflected on the turns of fate, and how when she was young she never thought she’d live out her life in a foreign land, speaking its tongue in a funny way. Now here I am and my French is bad. All that’s needed is chaos back home, and back home is getting ready to deliver. It’s funny, I suppose. But not really.