Whether it's "international communism" or "the war on terror," our leaders will always find a pretext to expand. 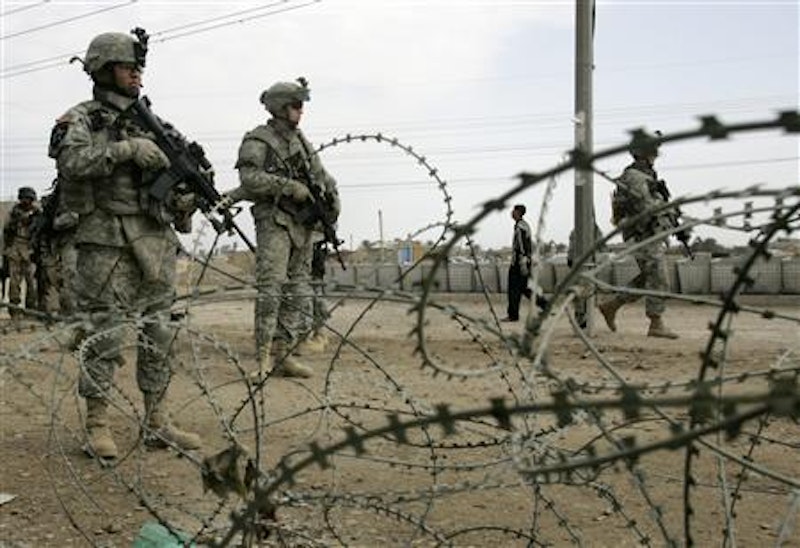 The nature of imperial politics has largely remained consistent since World War II, as historian Lloyd C. Gardner’s Three Kings, the Rise of an American Empire in the Middle East after World War II illustrates. Our leaders, bent on global domination, always mask their imperial initiatives under the guise of self-defense, from the fight against “international communism” to the “war on terror.”

During World War II FDR moved America into the Middle East through the Lend-Lease program, which, among other things, allowed the United States to extend largesse to the Saudis under the cover of fighting the Axis powers in exchange for oil and eventually the Dhahran air base, laying the groundwork for an empire that would replace the British, who were financially drained. Gardner writes that state planners “envisioned” for the Middle East “a combined economic and strategic approach through postwar airbases that would tie in with the desires of the rulers of those countries.” “Here,” Gardner explains, “in nascent form, was an outline of how American policy would develop after the war, not only in the Middle East but also worldwide.” This “would eventually extend to military advisory missions, status-of-force agreements, and all the rest that updated classic British methods in India.” Lend-Lease also set in motion the “imperial presidency,” in which the president would eventually have a personal budget from which he could allocate billions to whomever he pleases.

After the war, with the termination of Lend-Lease, new pretexts were needed. Accordingly, Truman filled the void by creating the Truman Doctrine in 1947, purporting to help all countries, particularly Greece and Turkey, struggling to maintain their place in the “free world” against the march of communism. The real objective was to expand American power into the Mediterranean. According to Gardner, “the ‘Russian threat,’ as Truman understood, presented the opportunity to seize the moment to secure what American arms and their technological breakthrough with the atomic bomb seemed to offer: the tempting vision of omnipotence.” General George A. Lincoln explained the true motives behind the Truman Doctrine at the behest of the Pentagon: “Anything that happens in Greece and Turkey inevitably has an effect on the rest of the Middle East, on Western Europe, and clear around the Pacific, because all these people are watching what the United States is doing,” adding further that “we face a situation that we have not seen since the days of Rome and Carthage—and we all know what happened to Carthage.”

The propaganda campaign during the lead-up to intervention in Greece and Turkey was strikingly similar to those that preceded the Iraq and Afghanistan wars. New York Times columnist James Reston echoed the words of Undersecretary Dean Acheson in describing a top secret White House meeting: “The primary short-term objective of United States foreign policy in the past two years has been to halt the expansion of Soviet influence into Western Europe and the Mediterranean.” Furthermore, “responsibility for world peace and stability… is what is at issue rather than the appropriation of a loan to a small Mediterranean country.”

The Truman Doctrine would go on to form the basis for American intervention until the end of the Cold War. During the Eisenhower administration, Defense Secretary Dulles would further develop the theme by introducing the concept of “international communism,” which had no real meaning, as he demonstrated when pressed by Congress during a hearing to define the term:

“International communism is a conspiracy composed of a certain number of people, all of whose names I do not know, and many of whom I suppose are secret. They have gotten control of one government after another. They first got control of Russia after the First World War. They have gone on getting control of one country after another until finally they were stopped. But they have not gone out of existence. International communism is still a group which is seeking to control the world, in my opinion.”

Subsequent presidents would claim that the communists were around the corner in every country they sought to dominate, from Vietnam to Nicaragua. In truth the Soviet Union was far weaker than the United States, and it knew not to expand much beyond its sphere of influence in Eastern Europe.

Nevertheless, the pretext of international communism served U.S. leaders well as they worked to establish an empire. The Saudis fell in line immediately, but there were problems elsewhere. First Iran was becoming intoxicated with nationalist fervor, and the rise of Mohammed Mossadeq threatened U.S. power with the prospect of nationalizing Iranian oil. In 1953 the CIA organized a coup to remove him from power and install the Shah. Then Egypt became a source of concern, as Nasser took over and sought to unite the Arab world under his secular nationalist ambitions. This did not sit well with the United States, which walked a diplomatic tightrope until Israel crushed Nasser during the Six Day War.

Throughout the rise of the Pax Americana, Israel was and continues to be a source of conflict for American planners, who have had to manage Arab anger over Israeli aggression and the expulsion of the Palestinians while sustaining their strong and strategically positioned client state. Finally, Iraq, which in the early post-World War II era served as a model client by joining the Baghdad Pact—an alliance with Pakistan and Turkey designed to keep Nasser at bay—eventually caught the virus of Arab nationalism in the form of Abdul Kareem Kassem, prompting the CIA to help Saddam Hussein rise to power through two coups, one in 1963 and another following the Six Day War. The Iraqi dictator at first seemed manageable to his CIA backers, but he ultimately became too ambitious.

The “war on terror” has been as useful to state planners as “international communism” was during the early days of America’s worldwide empire. In the 1990s leaders had to resort to the war on drugs to justify intervention in South America, but 9/11 opened a vast new framework for expansion. It has enabled the state and its corporate backers in the energy business and the military-industrial complex, such as Halliburton and Lockheed Martin, to exploit the nation’s fear to expand the empire through direct occupation during a time marked by declining resources and rising global population.