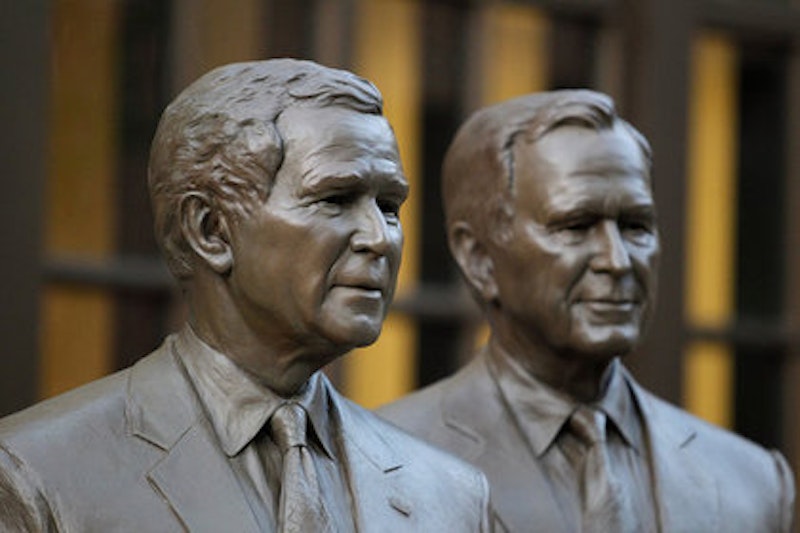 George Bush is enjoying his post-presidency. He plays golf. He asks wealthy cronies for donations, allowing him to build a library and offer $650,000 sinecures to conservative hacks so they can create exhibits lying about his legacy. He's taken up painting. When asked about Obama, he keeps his mouth shut. He's a happy non-entity, frolicking in snowdrifts of cash he doesn't deserve, but not doing anything especially evil with them. The man who blundered into war, killed tens of thousands, and wrecked the US economy, has been defanged. He's just another rich asshole now. We're safe.

As a liberal, this leaves me with something of a dilemma.

On the one hand, I feel pretty strongly that Bush should be in jail. His administration, as even many conservatives have admitted, engaged in heinous violations of the Geneva Conventions. These violations were approved at the top levels of the administration—which means that Bush and Dick Cheney decided that it was okay to subject prisoners to cruel and unusual punishment. That's a violation of international law and of US law, not to mention our Constitution. This is a hell of a lot worse than smoking pot. Yet pot smokers fill our jail cells, while these war criminals and torturers have money shoved down their pants by rancid, callow plutocrats.

So, again, that is the case for putting Bush in a jail cell and letting him rot. On the other hand, though… those pot smokers. The whole reason pot smokers shouldn't be in jail is because they're not hurting anyone. And George Bush isn't hurting anyone either, now. Again, I'm a bleeding-heart liberal, and one of the things the hearts of like-minded citizens bleed about is our nation's execrable, bloated, inhumane prison system. I can 100 percent support putting away people who are an ongoing threat. Jerry Sandusky needs to be restrained until he's too infirm to walk, and then some. But punishing people just to punish them seems pretty futile to me. Not to mention expensive and soul killing for everyone, imprisoners and prisoners alike.

There are other reasons to hold people accountable for their crimes besides simple incapacitation, of course. Deterrence is probably the main one. I would prefer that our presidents not break international laws. I would like them not to act like craven psychopathic tyrants. Putting Bush in prison would send a signal to future would-be American presidential psychopathic tyrants that if they insist on waterboarding, abusing, and sometimes killing prisoners in their custody, they will one day be taken to a minimum security prison where the food will be mediocre and they won’t be able to play golf as often as they would like. That's not much, perhaps, but it's something. Maybe enough, even, to have prevented Barack Obama from torturing prisoners. Though, of course, partisans would have you believe that Obama is not torturing prisoners. To which I can only reply: we'll see.

I think deterrence, and simple justice, are intellectually strong arguments for putting Bush in jail. Also for putting Obama in jail, since refusal to prosecute war crimes is itself a war crime. If it were up to a vote, on the basis of those arguments, I would cast my ballot to lock them both up with Marc Thiessen for all eternity.

Still, when I read about Bush's life now, my liberal heart just doesn't feel the call for vengeance on an emotional level. Yes, he betrayed our country and is a moral monster, and now he's happy, and that's wrong. But then I hear that honorable socialist, Eugene V. Debs: “[W]hile there is a criminal element, I am of it, and while there is a soul in prison, I am not free.”

You put George Bush in prison, and suddenly you've got Debs speaking on his behalf.  That can't be right. Perhaps part of the problem is that Bush's crime is itself a case study in everything that's wrong with punishment and the logic of punishment: its injustice, its sadism, its hypocrisy, its brazen, overwhelming cowardice. Smug little thugs like Thiessen or John Yoo, ever explaining to themselves in a whining drone that might makes right and that the enemy is a monster and that power has no limits.

They're so despicable because they're right there in your skull with you— that "I" that knows no other way to "I" than through the gleeful violence of making everyone else a thing. Bush turned rows of men into screaming, sputtering meat, and now he gets to walk around with his golf and painting. There's no way to rectify that except to turn him into meat as well. He certainly deserves to be in some buried cell. Yet that still doesn't seem like an adequate response to torture.