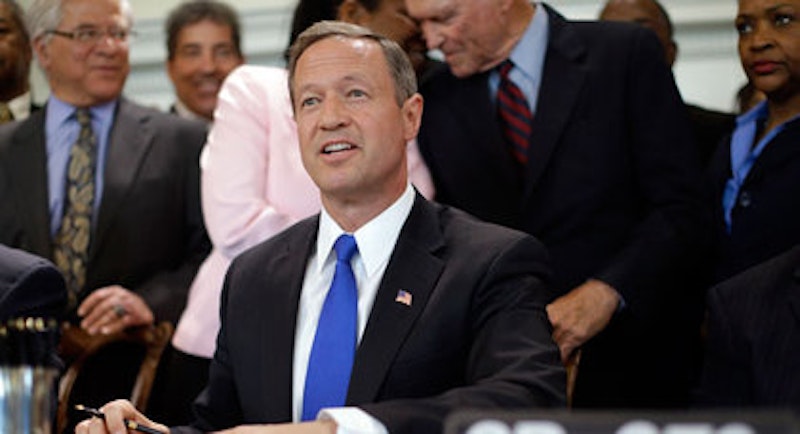 The bill signing last week by Maryland Gov. Martin O’Malley was a cause for celebration by liberals and an acute case of heartburn for conservatives. But conservatives have vowed to fight back. The headline-grabbing legislation, churned out by the recent General Assembly session, was widely interpreted at the time as calculated to fatten O’Malley’s portfolio as a possible candidate for president. But the signing ceremony occurred on the same day that a national poll showed that only one percent of Americans would support O’Malley for president.

The Quinnipiac poll shows that O’Malley trails at the back of the pack that is led by Hillary Clinton with 65 percent followed by Vice President Joe Biden at 13 percent. In the dead-end one percent cluster with O’Malley are Gov. Deval Patrick of Massachusetts and Sen. Mark Warner of Virginia. New York Gov. Andrew Cuomo registers at four percent. Polls this early before the 2016 primary elections are essentially a measure of name recognition. So much for Maryland homeboy O’Malley and his national ambitions despite his legislative accomplishments, at least for now.

And make no mistake, they are compelling. The legislative bragging rights were accomplished with the help of a lopsidedly Democratic General Assembly. Republicans unanimously opposed much of the progressive legislation. With O’Malley’s signature, Maryland became the 18th state to abolish the death penalty. And it happened only a day after Ohio executed a man for raping a killing a six-month-old.

Maryland Petitions, an organization that is dedicated to rear-guard Internet mischief and is headed by Del. Neil C. Parrot (R-Frederick), has announced its intention to petition the death penalty repeal law onto the 2014 ballot. A successful petition drive requires 55,736 valid signatures and would suspend the law until voters act on it. Recent polls show that a slim majority of Marylanders favor retaining the death penalty.

O’Malley finally succeeded after three tries to abolish capital punishment which has been effectively suspended in Maryland in a protocol standoff among the General Assembly, the Court of Appeals and the executive branch. This year, O’Malley was assisted by an all-out push by the NAACP, which argued that capital punishment is disproportionately applied to blacks, and the Roman Catholic Church, which has opposed the death penalty since the Supreme Court’s Roe vs. Wade decision. The Catholic Church has already asked people not to sign the petition. There are five men on Maryland’s death row who are not affected by the new law and whose fates the governor must decide.

While Congress fusses over the fine points of immigrant legislation, Maryland took another step toward easing the way for illegal immigrants to function within the American system. O’Malley signed a law creating a second-tier driver’s license but one that cannot be used for federal identification purposes. The law comes after voters approved the in-state tuition Dream Act that had been petitioned onto the 2012 ballot by Parrot’s organization.

Maryland also joined 18 other states and the District of Columbia in legalizing the use of marijuana for medical purposes. During the session, the legislature rejected attempts to decriminalize the substance to eliminate nuisance arrests for possession of small amounts. There were an estimated 24,000 arrests in Maryland last year for possession. Under the new law, the distribution of marijuana would be administered by teaching medical centers. But Maryland’s two teaching institutions, the Johns Hopkins Hospital and the University of Maryland, have expressed reluctance to participate in the program.

O’Malley also signed the law that will formally establish the Health Affordability Act in Maryland. The signing occurred within days after CareFirst asked for a rate increase of 25 percent for individual health care policyholders to cover the cost of the estimated 750,000 uninsured Marylanders who will be forced to buy insurance through the health care exchanges. Many of the uninsured are either elderly or in poor health which is projected to drive up health care cost significantly. The governor’s office disputes the claim and the need for an increase.

Among the 250 bills that O’Malley signed was another measure to facilitate voting while states under Republican control, most recently North Carolina, are adopting punishing laws that are designed to depress voting, especially among minorities, the young and the elderly. O’Malley’s bill would extend early voting from six to eight days as well as allow same day voting. The law would also add new locations wherever appropriate. After a slow start, early voting has finally caught on among the electorate and last year its popularity produced painfully long and slow-moving lines at the limited number of polling places.

If all of that liberal pile-on is not enough to send conservatives to the exits, there’s a slight glimmer of hope and a reason to stay put. The Baltimore Sun, long a resonant voice for liberal politics and politicians as well as a cornerstone of Baltimore’s social and business establishment which voted the majority of The Sun’s stock through trusts while the paper was home-owned, could wind up a bullhorn for ultra-conservative causes.

There has been widespread speculation, first reported in The New York Times, as well as hysteria within the journalistic community, that those conservative sugar-daddies, the Koch brothers, may want to buy the Tribune Co.’s newspaper assets, which include eight publications, in whole or in parts. They include: The Sun, The Los Angeles Times, The Chicago Tribune and The Hartford Courant.

The package also involves two Florida newspapers as well as Hoy, the nation’s second-largest Spanish language newspaper. The Los Angeles Times is the nation’s fourth largest newspaper and The Chicago Tribune is ninth. A recent report suggested that an informal poll showed that half the employees would quit The Los Angeles Times if the Koch brothers acquire the paper. It is questionable, however, that Koch ownership, when weighed against employees’ personal financial obligations, would produce such a self-inflicted mathematical result.

The purchase, if it occurs, would add to the Koch’s burgeoning right-wing propaganda apparatus that already includes financial ties and interests in prominent think tanks and conservative organizations such Americans for Prosperity, the Heritage Foundation, the CATO Institute, Freedom Works and the Tea Party.

But their principal outlet for reactionary and laissez-faire ideas is the semi-secret American Legislative Exchange Council (ALEC), which prepares and submits model conservative and libertarian legislation to legislatures around the country. And the Kochs have installed their hand-picked man as budget director in North Carolina who is responsible for much of the voter-suppression legislation being advanced in that state.

The Koch brothers, David and Charles, own Koch Industries outright, the second largest privately held corporation in America which they inherited from their father. Its interests are largely in oil, petroleum and timber. They once owned 3DI Technologies, in Easton, MD.

There’s something interesting but inexplicable happening with newspapers. While print news outlets are in free fall and headed for the graveyard, the Koch brothers aren’t the only wealthy investors turning their attention to newspapers. Warren Buffet has purchased a string of small-to-medium market newspapers. Buffet is also a major stockholder in The Washington Post. (The Washington Post newspaper division last week reported a 7.2 percent drop in circulation and an operating loss of $34.5 million.) And Robert Albritton, head of Albritton Communications, has said he is selling his seven television stations, including their flagship station, Washington’s WJLA, to concentrate on Politico, his website and newspaper, and other digital enterprises, according to reports.

But the Koch brothers appear to be looking beyond profit-and-loss statements. They seem more interested in acquiring outlets for their peculiar brand of free-wheeling enterprise and anti-government activities that could play well in the Palookavilles of Maryland well beyond The Sun’s central circulation area but have little cachet or acceptance in the city itself.