Ross Douthat sees the mote in the other side's eye. 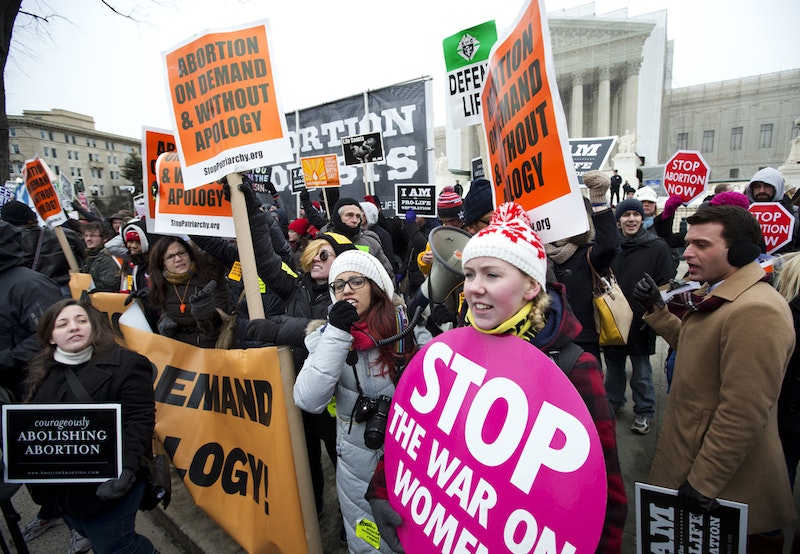 Abortion is an act of violence. There's no way to get around that. Therefore, if you oppose violence, you should oppose abortion, or so Ross Douthat argues in a column last week in the New York Times.

Douthat focuses specifically on the recent media flurry around Kermit Gosnell, a doctor in Philadelphia who specialized in gory, late-term, unsafe abortions. The left wing and feminist media had covered Gosnell extensively, arguing that he was a horrible, bloody example of Pennsylvania's tight restrictions on late-term termination of pregnancy. Mainstream media, however, had been less interested in covering the case. In Douthat's view, this was because the mainstream media knew that its viewers would be horrified and disturbed by the details. Douthat argues that feminist and committed pro-choice advocates have made their peace with the violence of abortion. Others are more conflicted. For those in the "mushy middle" as Douthat says, the revelation of the brutality of abortion is off-putting, and so the pro-choice mainstream media avoided the story.

Or, as Douthat sums up his argument:

To respond effectively to the doubts about abortion that fetal snipping summons up, pro-choice advocates would need arguments that (to rephrase Senior’s language) acknowledge and come to terms with the goriness of third-trimester abortions while simultaneously persuading the conflicted and uncommitted of their validity, and that somehow take ownership of the “violence” and “gruesomeness” of abortion (to borrow Harris’s words) without giving aid and comfort to the pro-life cause. And in the absence of such arguments, the pro-choice response to Gosnell feels either evasive and euphemistic, or else logically consistent in ways that tend to horrify the unconvinced—and in either case, inadequate to the challenge his case presents to the cause of abortion rights.

I think Douthat's argument is right as far as it goes. Gosnell highlights the violence of abortion, and when people see that violence, they are repulsed. What Douthat fails to note, though, is that restricting abortion is also violent, and sometime gruesomely so. Pregnancy is an intimate and difficult process; birth, as even men are aware, is extremely painful. To force someone to carry a baby to term and give birth against their will is to subject them to months of coercion ending in terrible physical pain. In extreme cases, as when the mother's life is endangered by the pregnancy, refusal to allow abortions can be a death sentence. In cases of rape or incest, the outlawing of abortion can consign a woman to hideous, inhuman psychological trauma. This is why Todd Akins and his ilk try to deny that abortion from rape can occur—because, if they once admit that it can, the cruelty and violence of the radical pro-life position becomes painfully clear.

Douthat suggests that the mushy middle would be moved to oppose abortion, or at least late-term abortion, if it only understood how hideous and violent the pro-choice position is. One might argue, on the contrary, that if the mushy middle really thought about cases of rape or incest or where the mother's life is threatened, they would see how hideous and violent the pro-life position is. But the truth is that the abortion debate has been going on for decades; pro-life groups have fully publicized the violence and gruesomeness of late-term abortions; pro-choice groups have fully publicized the violence and cruelty of denying abortion in cases of rape or when the mother's life is threatened.

The mushy middle remains the mushy middle not because people don't understand the violence, but rather because they understand that, on this issue, there is no escape from violence. On the one hand, there are dead fetuses; on the other, there are tortured women. Douthat says we can have clean hands if we step away from the first… but that's only because he's ignoring the second. Those in the mushy middle may not have thought about the issue as much as he has, but their confusion and ambivalence is considerably more honest.

This is why, now, as ever, the best approach to abortion is to make it, wherever possible, unnecessary—by making contraception easily available, providing sex education, and improving social services so that raising children is not such an economic burden. Once a woman is pregnant with a child she does not want, your only option is to use state force to inflict violence against an actual human in the name of preventing violence to a potential human. I'm pro-choice in pretty much all circumstances, but I understand why some people come down in a different place. Douthat, in his column, quotes several pro-choice writers acknowledging the violence of their position. I wish Douthat were honest enough to acknowledge the violence of his.