Bloomberg Nation: A Whisper to a Scream 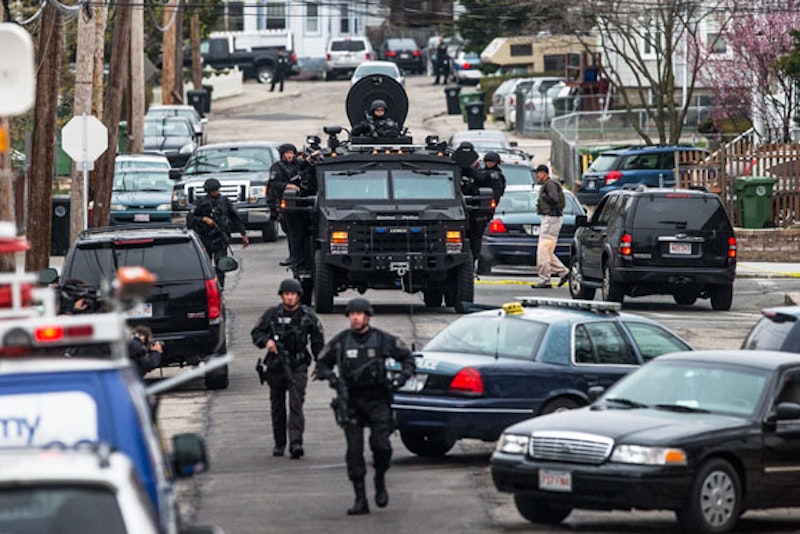 A week hasn’t yet passed since the successful manhunt in Boston, yet given the increasingly short attention span of Americans in general, and the media in particular, the horrific Marathon bombing and its aftermath is nearing a point where it’s compartmentalized, like a blizzard or hurricane, and will soon recede into near-history. (The obvious exception is the ongoing grief of the victims and their families.) In time, #bostonstrong will be replaced by some other national horror or fascination, and the phrase “Today, we’re all Bostonians” will no longer have any currency.

A question was posed on Twitter recently about whether The Boston Globe’s exhaustive, and excellent coverage of the tragedy/drama will boost its sale price on the shrinking market for marginalized daily newspapers. Doubtful: the company’s still in economic distress and even vanity buyers aren’t interested. CNN and The New York Post both lost their way during the several days of Boston speculation and investigation and the immediate reaction from media critics is that the “brand” of each entity, especially the Post, has been irreparably damaged. Maybe, but that was happening already; cable TV’s in trouble, and as for the Post, it really depends on whether owner Rupert Murdoch is finally willing to let his shriveled NYC megaphone go.

But I think it’s worth pointing out that in the avalanche of Boston stories, interviews, Tweets, blogposts and such, none made as much sense as John Cassidy’s April 20 dispatch on The New Yorker’s website. While showing due respect to those affected by the bombings, Cassidy—not incidentally, born in England, where IRA terrorist attacks once occurred frequently—wondered whether the United States had “gone a little nuts.” It’s an appropriate question, given the lockdown of an entire major city on April 19, as opposed to a more reasonable action confined to Watertown, and when the next, and inevitable, terrorist strike happens, will a precedent have been set? I hope not, but considering that the U.S. is turning—faster rather than slower—into Bloomberg Nation, that hope is likely quixotic. I refer, of course, to New York City Mayor Michael Bloomberg, who’s made it his business, especially in the past several years, to dictate what citizens can and cannot do. Just yesterday, came the news that NYC mayoral candidate Christine Quinn (with Bloomberg’s blessing) is proposing that the legal age for purchasing cigarettes in the city be raised from 18 to 21, a despicable (in my view) freedom of choice violation. Are 18-year-olds so dim-witted, in Bloomberg’s mind, that they’re ignorant of tobacco’s health hazards, and unable without the government’s interference to make a decision as to whether they decide to smoke? Teenagers of that age are eligible to vote in elections—a presumption, one might think, of the comprehension of civic issues—and of course can, and do, serve in the military. Young adults not yet 21 drive—a far more immediate health threat, especially if they’re texting or drinking—although given Bloomberg’s messianic quest to go down in American history as the creator of the Nanny State, it wouldn’t be surprising if his last act as mayor is questioning at what age a person can obtain a driving license.

I don’t often agree with Cassidy’s politics or economic views, but his measured questions about the Boston hysteria are right on target. He writes:

America is a violent place. Practically every day, somewhere in the country, cops are looking for armed and dangerous men who have just killed one or more innocent members of the public. But when a gunman runs amok in East L.A., say, they don’t close down Brentwood or Santa Monica. The very thought is absurd.

It’s possible the itchy, twitchy fingers of Massachusetts elected officials last Friday were influenced by a very emotional week: the Marathon bombings, the Texas explosion and the ricin-laced letters sent to President Obama and Sen. Roger Wicker, not to mention that the 24-7 television coverage was a little nerve-racking. (I’ll confess to waking up one very early morning last week, after dreaming that two members of the National Guard were stationed outside our house in Baltimore, undoubtedly triggered by memories of the post-9/11 military presence in our then-neighborhood of Tribeca.)

But as Cassidy points out, “it’s the authorities and the media that tend to go a little crazy,” in such circumstances, while the public at large would, for the most part, rather be trusted to keep themselves safe without mandatory rules set in place. It’s not malevolence on the government’s part—although I believe Bloomberg gets a rush every time he sees a NYC restaurant’s menu studded with the number of calories an item totals—but peer pressure hysteria. Think of the United States in 2000, then today, and please convince me that 10 years from now we won’t be living in a de facto police state.