Republicans Are Obsessed With Sex

Abortion is one of the most enduring issues in America’s cultural wars. 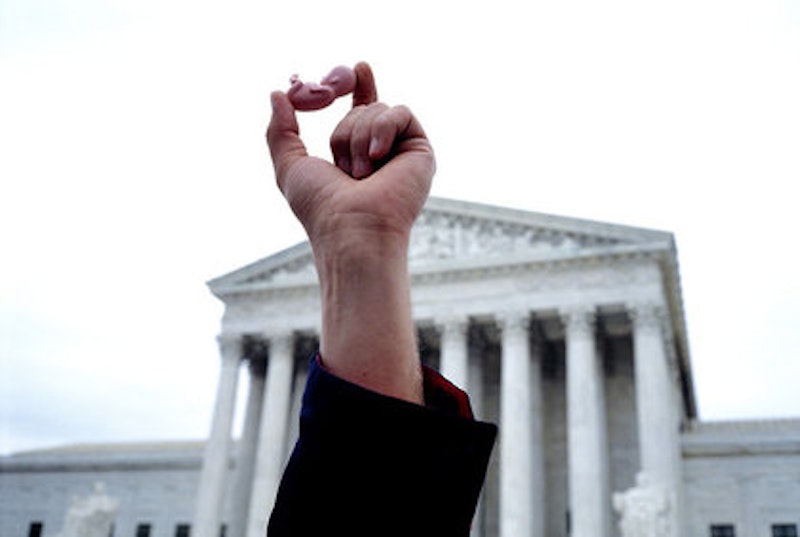 Imagine a group of aging white males sitting around a legislative conference table deciding what women can do with their bodies. Or even more disconcerting, a single elected official dictating what forms of intimate pleasure couples can engage in. As incongruous as it seems in 2013, that very disposition is accelerating across the country in states where Republicans control the legislative process and other high offices.

Republicans, like the 19th century Victorians, are obsessed with sex. Yet many Republicans, with the flagrant exceptions of Sen. David Vitter and former Gov. Mark Sanford, are thoroughly contemptuous of women’s bodies. Or else why would they conjure such exquisite forms of torment, let alone humiliating experiences, as invasive vaginal probes and forced X-ray visuals.

Anti-abortion sentiment among the states is gaining fresh impetus from a grizzly and graphic trial of an abortion provider in Philadelphia. The trial of Kermit Gosnell, who faces charges of murdering seven babies by snipping their spines, has drawn national news coverage after conservative activists and abortion foes accused the mainstream media of ignoring it. Reporters and editors are now blanketing the trial. Gosnell also faces a third degree murder charge after a woman died from receiving too much anesthesia during an abortion procedure.

There are now 23 states where Republicans control the governorships and the legislatures and another seven where the GOP occupies the governorships, many of them with divided legislatures. And within the past couple of months, four of those states—Alabama, Arkansas, Kansas and North Dakota—have adopted some of the most restrictive anti-abortion laws in the country. In addition, Virginia has adopted standards for clinics that perform abortions that could, intentionally, put many of them out of business. Even Democratic Delaware is considering clamping down on abortion providers.

Cuccinelli wants to appeal the ruling to the full 15-member 4th Circuit Court of Appeals in hopes of a reversal and reinstatement of the law. Until the recent ruling, Virginia was one of 14 states that still had anti-sodomy laws on its books despite a Supreme Court ruling a decade ago holding that such laws are unconstitutional. Thirteen states still retain the laws even though they are, practically, unenforceable.

Cuccinelli is also the elected official who wants to rid his state of abortion clinics. He forced the Virginia Board of Health to apply strict hospital-level codes to abortion providers in the hope that they will be unable to meet them and shut down. He told Board members that his office would refuse to defend them in cases of legal action if they did not adopt the stringent rules. Earlier, Virginia had seriously considered requiring vaginal probes as a pre-condition for an abortion, a procedure supported by the state’s Republican governor, Bob McDonnell, but later abandoned.

The Supreme Court legalized abortion in its 1973 Roe vs. Wade decision, but it allowed states to regulate or limit its use or to create “trigger" laws which would make abortion illegal if Roe vs. Wade is overturned. And this seems to be the goal of anti-abortion activists. By enacting overly restrictive abortion laws, they’re hoping for a challenge that will eventually bring the issue before the high court which is narrowly controlled by conservatives. That, in part, is why the rush is on. It is assumed that President Obama will get at least one, possibly two, court appointments before his second and final term ends in January, 2017. Justice Ruth Bader Ginsberg, for one, has said she will retire after two more years on the court.

Abortion is one of those toxic issues that opponents argue has no middle ground. You’re either for it or against it. Yet there are very few, if any, individuals who are actually for abortion. Those on the opposite end of the issue say that no one is actually in favor of abortion but that women (in consultation with their physicians) should have a personal choice over what to do with their bodies. Abortion opponents counter that that is pure sophistry and a cop-out.

There are four states that recently chose the hard-line approach to the tetchy issue of abortion, one more absurdly outdoing the other. The Kansas legislature has passed a so-called “personhood” law that says life begins at fertilization. Granting personhood to a fetus raises a variety of issues: If a spec under a microscope is a life, does the spec have the right to vote? Or can the host mother cast two votes, one for herself and a second for the fetus? Many states with liberal abortion laws define life as beginning when the fetus is viable outside the womb.

North Dakota is another state that stretched definitions to join the ranks of the restrictive states. It adopted a law that prohibits an abortion as soon as a heartbeat is detected, which can be as early as six weeks.

In Alabama, a law went into effect that requires doctors who perform abortions to have hospital admitting privileges. And in Arkansas, abortions can now be banned starting as early as 12 weeks. The Arkansas law also incorporates the “personhood” definition.

Abortion as a procedure is not the only front in the fight to end the practice. Conservatives were upset recently over a federal judge’s ruling that it is illegal to ban the sale of the morning-after birth control pill without a prescription to girls under 17. The morning-after pill is also known as Plan B One Step. Critics of the decision argued that the morning-after pill is tantamount to abortion. Plan B One Stop is a contraception pill and should not be confused or conflated with RU486 which is an abortion pill.

To a lesser degree, birth control has been at the core of the fight between the Roman Catholic Church and the Obama Administration over provisions in the Affordable Care Act that require employers offer health care plans that cover contraception. The Administration has made several attempts at compromise and accommodation but none have assuaged opponents of the requirement. The issue is before the courts. The Catholic Church prohibits the use of any artificial means of contraception. Ninety percent of Catholics admit to ignoring the ban and using some form of birth control.

Abortion is one of the most enduring issues in America’s cultural wars. A former California congressman, Robert Dornan (R) regularly used to attach an anti-abortion rider to the B1 bomber appropriations bill. “People won’t remember the B1 bomber,” Dornan once remarked. “But they’ll sure as hell never forget the anti-abortion rider.”