Hurricane Irene is yet another wake-up call about the urgent need to combat climate change. 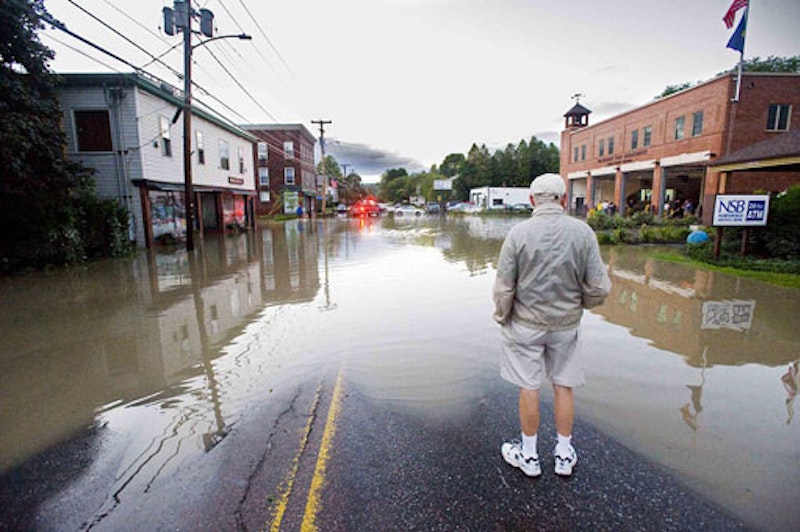 Hurricane Irene caps a summer filled with unprecedented extreme weather events and ominous news about the climate, from historic dust bowls sweeping across America to revelations that a mass extinction unprecedented in human history is well under way. Yet, as with most of these events, if you followed the mass media’s coverage of Hurricane Irene you probably heard very little about global warming, except from right-wing propagandists railing against the very idea of it.

As a New Yorker I was spared the worst. My neighborhood experienced little damage, and my family and I even drove into Manhattan with little difficulty to get dinner. But many others weren’t so lucky. Just ask the people of Vermont how things went. According to Gov. Peter Shumlin, “We're experiencing flooding now in many areas of Vermont that is unprecedented in record keeping.” The storm wiped out bridges that had been up for hundreds of years and survived the Great Flood of 1927, flooding and eating away at buildings that are well over 100 years old.

The connection to climate change is clear, says Shumlin, one of the few officials in America who runs a climate cabinet: “We didn’t used to get weather patterns like this in Vermont. We didn’t get tropical storms. We didn’t get flash flooding… Our storm patterns weren’t like Costa Rica; they were like Vermont.” But in addition to Irene, “we went through that [unprecedented extreme weather] just eight weeks ago, where we had our biggest lake, Lake Champlain, at flood levels that have never been recorded in recorded history.” He adds that “the extraordinary weather patterns that we’re seeing are a result of our burnings of fossil fuel. We’ve got to get off fossil fuels as quickly as we know how, to make this planet livable for our children and our grandchildren.”

Overall, the storm has killed at least 40 people, caused nearly $7 billion worth of damage, which would make it one of the 10 most expensive catastrophes in American history, and knocked out power for over four million homes, leaving countless people to deal with flooding, toppled houses, closed streets and shuttered businesses. Many who live from check to check will not receive payment for the days they could not work. Some were left stranded. And others will have to wait weeks till their electricity is restored. The New York Times reports that “in Fleischmanns, N.Y., an 82-year-old Brooklyn woman vacationing with a group of friends from her Hasidic Jewish community in a Catskill motel drowned after a creek overflowed and engulfed her one-story cottage. More than six feet of water swept the cottage more than 30 feet from its foundation.”

Hurricane Irene is only one of many extreme weather events to plague America this summer. According to environmentalist and co-founder of 350.org Bill McKibben, “So far this year—it’s only August—so far this year, the U.S. has suffered more billion-dollar weather-related disasters than any year in history.” There is now significantly more water vapor in the atmosphere because fossil fuels trap more heat. McKibben says, “the atmosphere is about four percent wetter than it was 40 years ago,” which is “an enormous change in a basic physical parameter. It loads the dice for both drought, as you’re getting increased evaporation, and deluge and downpour and flood.”

It’s no surprise, therefore, that the Missouri and Mississippi River Basins experienced record flooding a few months ago, while Texas has been suffering the worst drought in its history. On Sunday Texas tied an all-time record of 109 degrees, and according to The Houston Chronicle, “the sweltering day capped an August that was the city's warmest month on record with 26 of the 27 days reaching at least 100 degrees.” Apparently, Gov. Rick Perry’s prayers are not working. More broadly, many consider the Great Drought of 2011 America’s worst since the Dust Bowls, making farming impossible in some areas and dramatically impacting food prices.

But all this has garnered very little attention in the mainstream media, which throughout the summer has focused mainly on the manufactured debt crisis and other artificial problems. Hurricane Irene did indeed receive abundant attention, but there was barely any coverage about the catastrophe in the context of climate change, leaving Americans with the impression that the storm was just an isolated incident, not part of a clear pattern of global warming-induced extreme weather. There has not been a single op-ed in The New York Times making the connection as of this writing.

The only ones in the corporate media who have discussed global warming are propagandists like Rush Limbaugh, who jumped at the opportunity to deride the “liberal media” for inflating the severity of a tropical storm in an alarmist effort to trumpet the dangers of climate change. “They couldn't wait for this storm,” he thundered, shamelessly adding that President Obama was “hoping this was going to be a disaster" so he could further destroy the economy. And finally, “the hysterical reporting on this hurricane has exposed the media to many people who might not have really noticed it before." This is Limbaugh at his best, employing the classic Orwellian technique of accusing his enemies of doing what he does—manufacturing a crisis to push a partisan agenda—while persuading his listeners to think they have reached these conclusions for themselves.

But, contrary to Limbaugh’s non-reality based rants, the earth is experiencing a terrible crisis that threatens to wipe out humanity. A recent major study by a global panel of leading marine scientists has found that “The world's oceans are faced with an unprecedented loss of species comparable to the great mass extinctions of prehistory… The seas are degenerating far faster than anyone has predicted… because of the cumulative impact of a number of severe individual stresses, ranging from climate warming and sea-water acidification, to widespread chemical pollution and gross overfishing.” The experts characterized the catastrophe as “unprecedented in human history,” and “directly comparable to the five great mass extinctions in the geological record, during each of which much of the world's life died out.”