US Paralyzed by "Thought Riots"

Reflections on the midterms. 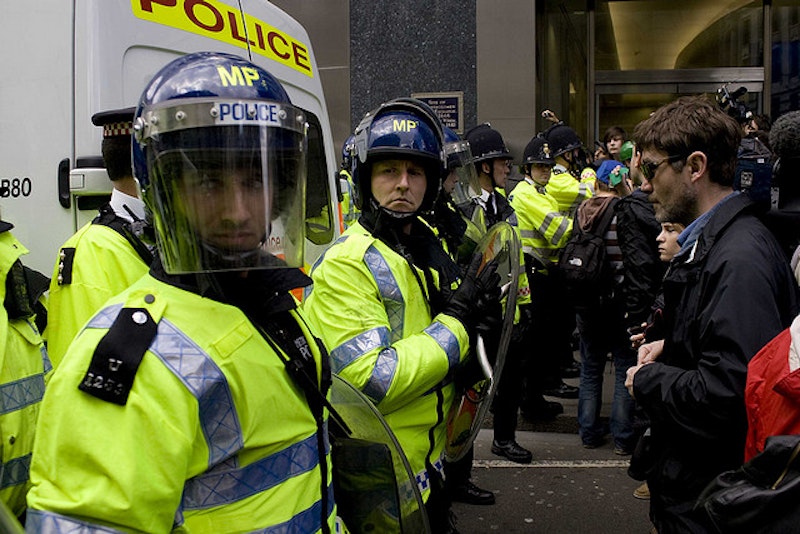 Reflecting on the midterm elections, I worried that anything I might put down in this space would be read as rationalization or apologist partisanship. With Republicans exceeding expectations in the House and not quite meeting expectations in the Senate, the post mortems are abundant; it’s a market of spin and chaos out there: no matter where you turn someone is pontificating on some particular bellwether House race or ballot referendum as the Real Reason why everyone voted the way the did.

Simple facts never stay simple for very long, but the overriding thought on voters’ minds this past Tuesday was the economy—the US economy, the largest and most powerful in the world, the playing fields for the American Dream, hasn’t been doing so well for the past few years and the voters said so.

These are uncertain times made more so by abject partisanship wherever you look; the President made early attempts to bring the Republican Party to the negotiating table—something that will prove completely impossible with the large, incoming class of Tea Partiers—which went nowhere. The White House fumbled the politics of health care, the stimulus and pretty much everything else along the way. I try to focus on the fact that Democratic, liberal, Keynesian policy kept this country out of a depression and brought an ounce of sanity to a corrupt and unethical system of health care in this country—this is what I mean about rationalizing—but at the same time the Obama Administration can’t hold on to a political message without it getting stolen from umbrage mongers like FOX and the like.

One of the first tests of [Boehner's] ability to discipline populist revolutionaries fresh from the electoral barricades will come when the new Congress is asked to raise the federal debt limit from $12.4 trillion to $14.3 trillion. No Congress has ever refused to approve such an increase and, if such a refusal were to occur, the consequences for the global financial system would be apocalyptic.

Many of the new senators and House members have pledged to vote against an increase in the debt. Tim Phillips, president of Americans for Prosperity—one of the more active national tea party groups—told Politico this week that the Republicans' new House majority "cannot fold on the debt."

Glimmers of hope via a divided government? The thought is at once absurd, given the political climate, and entirely possible, given the history:

I should also note that nearly all of the major government-restraining legislation of the last thirty years (e.g.—the 1981 and 1986 tax reforms, the 1996 welfare reform, the deregulations and spending restrictions of the late 1990s) were passed under divided government, whereas nearly all the major expansions of government during that period (e.g.—Bush’s massive prescription drug bill, Obama’s stimulus and health care bills) were enacted under united control (the TARP bailout in late 2008 is the one big exception). This is probably not an accident and is consistent with historical experience. I’m not exactly optimistic about what either Obama or the new Republican House majority will do. But I do think that prospects for limiting government are far better today than they were just a few months ago. And the return of divided government is a crucial reason why. At the very least, we are unlikely to see any massive new government programs enacted, as happened under both united Republican control in the Bush era and united Democratic control under Obama.

There wasn’t a mandate in this election, only repudiation—repudiation of stimulus spending (something any economist worth his expensive degrees knows is crucial in battling out of recessions), repudiation of reality (the health care reform package does indeed drive down the deficit over the long term, but no one seems to care all that much) and a repudiation of patience. After a massive and systemic collapse in the financial sector, the American public is ready to move on. No more foreclosures, no more factory closings or job losses, no more hard slog—please. The American people are tired of it all, and even though they trust Republicans less than Democrats; even though they trust Obama most of all; the American public is sick and tired of this sick and tired economy and gave the milquetoast Democrats the boot.

The Atlantic's James Fallows found this disconcerting piece of psychoanalysis from our good friends, the Chinese:

The world media believes that Americans did not take into serious consideration the current administration's policy adjustments but abruptly hoped their leader would instantly bring them back to the golden time after Cold War, which is impossible. Obama has been completely denied. It is believed to be a "thought riot" in the U.S.... Yu Wanli at Peking University's Center for International Strategic Research said that Americans will become more impatient than usual due to the elections.  What Obama has encountered right now is because he has become the scapegoat for U.S. decline.

I don’t blame the public for its cognitive dissonance; it’s something we are all guilty of time and time again. I am disappointed that political messaging, endless campaigning and obnoxious posturing go terribly with a long, hard recovery. Republicans will not take responsibility, now that they have the House. They will duck and cover and throw cheap shots—the same strategy when they were in the minority—and blame the slow and tired economy on Obama in 2012.