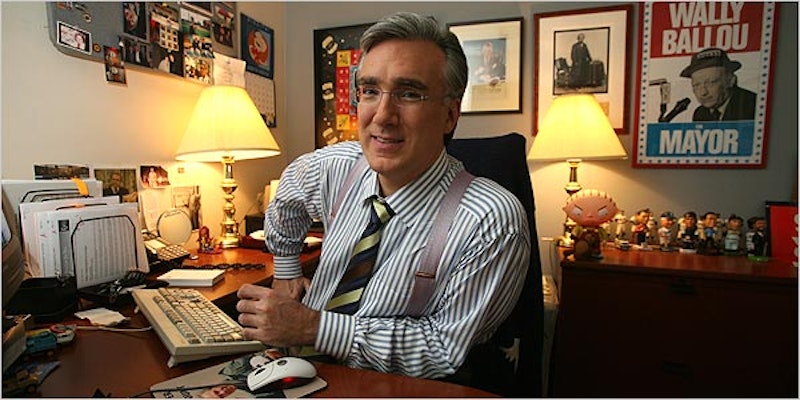 First things first. Whether you’re still enjoying the hangover from your Boehner Bash of last Tuesday, or remain apoplectic that FDR wasn’t allowed to pack the Supreme Court as he saw fit, we can all agree on this one thing: Keith Olbermann is a smarmy windbag. Always has been, always will be.

So it was with some surprise that Olbermann was suspended last Friday by his MSNBC bosses not for one of this trademark incoherent rants on-air, but for admitting to Politico that he’d donated $2400 each to Kentucky Senate candidate Jack Conway and Arizona Reps. Raul Grijalva and Gabrielle Giffords—all Democrats, obviously—during the just-wrapped election cycle. This, according to the network’s president, Phil Griffin, would not do: “I became aware of Keith’s political contributions late last night,” he said in a statement. “Mindful of NBC News policy and standards, I have suspended him indefinitely without pay.”

This morning comes word that Olbermann will be back on the set of his nightly Countdown program beginning tomorrow. Even in the relatively fast-changing world of 24-hour cable news networks, finding out that “indefinitely” means “two days” is fairly breathtaking.

The question of whether Olbermann should have been suspended so quickly, or at all, has been a hot topic all weekend. Going by a 2007 roundup on MSNBC.com of different news organizations’ policies when it comes to political contributions—which should leave you either laughing or aghast at the overriding inconsistencies contained within—NBC News expressly forbids its employees from making such donations without prior approval.

Whether MSNBC does, or should, fall under NBC News’ imprimatur has been the cause of debate both within and without its walls for years. As Gawker points out, MSNBC often isn’t held to the same strict standards as its parent: “…[I]f they were, it would be a much less bombastic and politically charged network,” e.g. CNN—and nobody wants that. Probably not even CNN.

This is fine if we accept that Olbermann in his Countdown guise (roughly 99 percent of the time) is a left-leaning blowhard who’s paid primarily for the self-amused routines he aims at conservatives. After all, he’s not Brian Williams dispassionately delivering election results over at NBC.

But the problem here is that the revelations of the donations came so soon after Olbermann was, in fact, anchoring MSNBC’s news coverage of the Nov. 2 elections. (That he urged viewers to “get some popcorn” when tossing to Christine O’Donnell’s concession speech predictably rankled some commentators, though probably not many MSNBC viewers.) The divide between news and opinion has long been a sketchy one at the cable news nets—and hardly seems to be in evidence at all at Fox News—but Griffin quickly decided it was time to make a stand.

Until everyone remembered that Joe Scarborough, co-host of MSNBC’s Morning Joe and a former Republican representative, had contributed $4200 in 2006 to a Republican candidate for the House from Oregon—an incident dismissed by an NBC spokesperson at the time with “Joe hosts an opinion program and is not a news reporter.”

The Daily Kos had a field day with this one. “They both made personal contributions to political candidates,” wrote Jed Lewison. “But Olbermann supports Democrats, and Scarborough supports Republicans, so even though Olbermann is the network’s top-rated host, and even though Scarborough hides his ratings sheet in a little box in the basement, it’s Olbermann that gets silenced.”

Faced with this, Griffin had little choice but to cave in and bring Olbermann back. The man’s quickly jerking knees bring to mind the whole Juan Williams/NPR episode of just a few weeks ago—with the exception, of course, that Williams has always been paid for his opinions, as mundane as they usually are.

Did Olbermann’s admission that he’d given money to some Democratic candidates (Grijalva and Giffords won, by the way; Conway was crushed) really surprise anybody? Was his refusal to issue an on-air apology for those donations what really earned him the extended weekend, as some have reported?

It doesn’t seem to matter now. What does matter is what Phil Griffin wants MSNBC to stand for.