The difference in Indian family structure highlights a trip to a small Indian village. 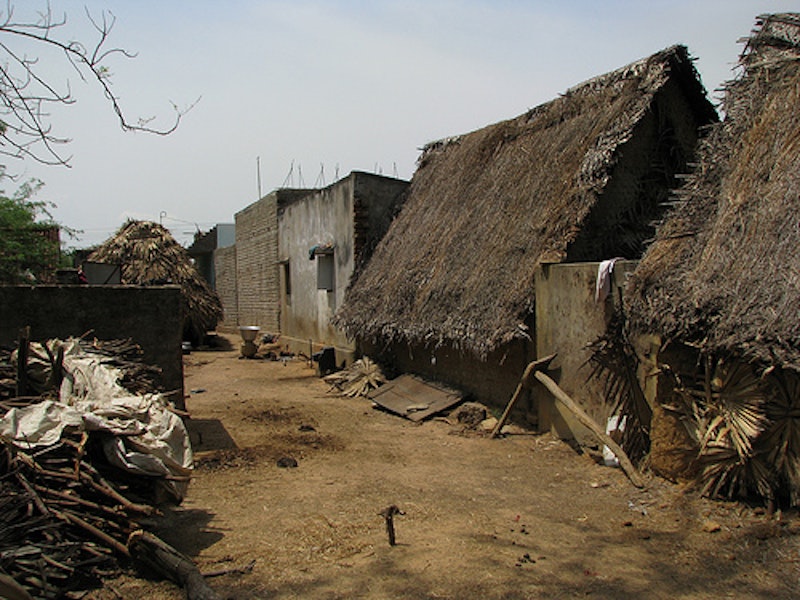 Over the weekend, a friend invited me to Banyani, his village a couple hours away in the state of Haryana, for Diwali, a Hindu holiday comparable to Christmas celebrated with lights, family, gifts, as well as a terrifying amount of fireworks. I jumped at the opportunity to get out of Delhi—the nonstop fireworks and firecrackers leading up to the holiday had made the city sound like a war zone, not to mention sullied the already putrid air.

I was a bit nervous about the trip; this wasn't a friend I knew particularly well, and I wasn't sure how much English people would speak (answer: not that much), but our arrival in Banyani instantly put me at ease. I was welcomed as though I was part of the family. It felt like going to an aunt or grandmother's house—plates and plates of food, endearingly overbearing hospitality. We sat lazily in the sun, enjoyed the fresh air, and ate a ludicrous amount of food.

After writing last week that I rarely got stares in my part of Delhi, an American friend living here told me he got stares everywhere he went. This hadn't really been my experience, even upon my arrival in Banyani, so I was unknowingly about to have quite a shock. As we made our way around town visiting my friend's family and friends, my presence started to create a commotion. Aunts wanted me to stay in their homes for hours, small crowds would gather every time we were stationary for more than a few minutes, and people began coming in from across town to check me out. Apparently, I was the first foreigner to visit Banyani in years. While I was sitting in various uncles' grocery shops, children would come in—on errands from their parents for a quick pint of sugar or various last minute necessity—see me, and just stop. No words, just bug-eyed stares. It was bizarre.

And everyone had questions. Honestly, it added to the aunt/grandmother analogy except instead of a couple aunts, there was a village's worth. And instead of the basic personal questions about my occupation, marital status, and family, I also had to answer much more difficult questions. I spent the weekend talking about America, our culture, our values, my religion, even whether I liked America more than India and why.

Most people in Banyani responded to my answers with a sense of wonder. "I feel like there are no similarities between Americans and us," my friend told me after listening to a weekend's worth of answers. My sense of a similarity was difficult to articulate, especially with a slight language barrier.

But there is one major difference that people found the most jarring and asked the most questions about: our notions of family and community. I have been accepted even though my differences are acknowledged. People are much more outgoing and comfortable with each other than in America, even in the anonymous grind of a throbbing city like Delhi. It's much easier to come into that than it is to leave it. I have been invited into multiple homes after knowing someone for less than a few hours. This is borderline unthinkable in America. Imagine if a stranger, after chatting with you for a couple hours, invited you to his or her family village for the weekend. You might be freaked out. If you were 35, married, and living at home, people might look at you a bit funny. But this is reality here.

In Banyani, people couldn't understand how Americans willingly left the home at 18 and 22. Sure, people like my friend have left the village, but it's strictly for economic opportunity with the hope to return to the entire family under one roof. Even people who are living away from their parents are largely doing so with siblings, cousins, or other family members. When I explained the idea of a nursing home, people were horrified. I was asked over and over, "What happens when your parents get old? Who will take care of them?"

My friend's father is a farmer, as are virtually all families in Banyani. But unlike the idealized American farm and its lone farmhouse, miles from the nearest neighbor, the residents of Banyani made a decision at some point, probably hundreds of years ago, that they were all going to live together. The village itself reminded me of a less picturesque Moroccan Kasbah with old, narrow dirt streets and closely quartered homes. The farmland itself was a couple miles outside town. Everyone had a little shack on their farmland, but no one lived on it, everyone lives in town and commutes to their field. They made the choice for everyone—all the uncles, aunts, grandparents, friends, and neighbors—to be as close as possible. Roughly 10,000 people live in a town the size of Baltimore's Inner Harbor with only a handful of buildings more than one-story tall. Groups of three-year-old children play alone in the streets, elders nowhere in sight.

In America, we are obsessed with space. India is a country where space is willfully sacrificed in the name of being close together. And for me, that very notion is amazing.