Thomas Frank Can't See the Forest For the Loons

The Journal's resident liberal populist sees conspiracies everywhere. He ought to have a drink with The New Republic's Leon Wieseltier for a dose of reality. 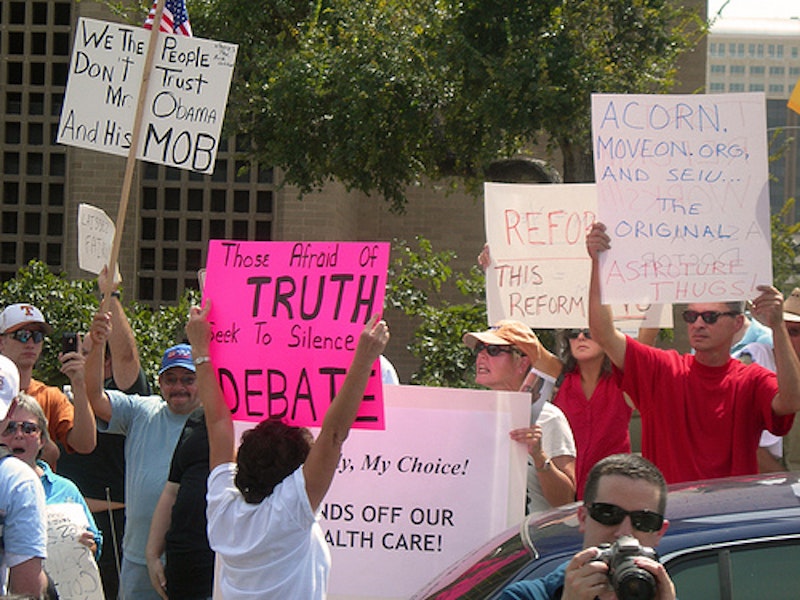 Thomas Frank is, week by week in The Wall Street Journal, inching his way into Ann Coulter territory.

As I've noted before, Frank, the Journal's nod to idealistic liberalism on its op-ed pages every Wednesday, is increasingly convinced that a majority of citizens to the right of Joe Biden have fallen under the spell of political carnival barkers such as Glenn Beck, Sean Hannity and Rush Limbaugh. Until recently it appeared unlikely to me that Frank, a best-selling author in his own right, was spinning out his conspiracy-laden yarns in the cynical manner of say, Michael Moore, the left-wing celebrity who profits handsomely from films about the rotten state of capitalism in the United States.

But who knows? Maybe Frank has decided there's a lot of gold awarded to those who hoist the megaphone of the fringe and he wants his due, mostly because he was forced to suffer through eight "illegitimate" years of George W. Bush. I admire the entrepreneurial spirit, and if that's the direction a frustrated Frank is skipping towards, it's swell by me. Could be he remembers the 1980s Pet Shop Boys hit and is thinking, "I've the got the brains, I've the forum, let's make lots of money!"

It's possible that Frank is earnest as a minister and is just going through a rough patch, but what is one to think after reading his "From John Birchers to Birthers" in the Oct. 21 Journal?

He writes: "Consider... the widespread belief that President Barack Obama's birth certificate was forged." Widespread? Sure, that wacky charge is bruited about in certain Internet provinces and among a few television commentators, but those who contest Obama's birth certificate are so palpably off-base that one can hardly respond, a conviction shared by nearly all of those in ranks of conservatives, Republicans and Independents.

"Or consider the widespread conservative conviction that we are being marched secretly into communism or fascism. Why would someone bother? It seems equally likely, given today's circumstances, that conspirators would trick us into becoming a colony of Belgium or the imperial seat of the Bonaparte family." Points to Frank for a rare touch of humor, but again the use of the word "widespread" is either just silly or, more cynically, a Coulteresque blast of provocative rhetoric. I know and read a lot of conservative/libertarian writers, and have yet to find a single person who, despite profound misgivings about Obama's health care plan, for example, believes that this president, who has yet to discover the definition of "decisive," harbors any "secret" plans for a communist or fascist America.

And: "Consider the recent wave of fear that the hypnotic Mr. Obama was planning to indoctrinate schoolchildren." I suppose there were more than a few Obama dissenters who fretted that teachers might impress upon their pupils that the President's words were meant to be carved in stone, but it was a non-event to most of my acquaintances. Why wouldn't a president want to offer some ceremonial advice to America's young? Doesn't that happen in every administration? Besides, whatever "wave of fear" that chilled Frank's spine is minor compared to the left-wing's understandable anger at Obama not delivering on campaign promises, whether it's shutting Guantanamo, ramping up troops in Afghanistan or championing gay rights.

Finally: "‘Pseudo-conservative' was another term [historian Richard] Hofstadter used to describe the far-right fringe... It's a pity Hofstadter isn't here to see the fakes eclipse the real thing." If Obama's current favorable poll ratings-a bit north of 50 percent-are any indication, there sure are a lot of "fakes" populating this country.

The "main show" in American politics hasn't changed: there's a true difference of opinion over the proper balance of power between the individual and government in almost every facet of life. Some fear incompetence, heavy-handedness and insensitivity by the government, at the expense of the individual; others are nervous about the private sector's power and influence and neglect of the underdog. It's an honest, timeless debate and is usually conducted in a semi-civilized, "let's agree to disagree" manner. The "sideshow," on the other hand, is part entertainment and part genuine lunacy. Frank, who sees conspiracy-mongers around every corner, is now becoming one of them.

I've no doubt that Thomas Frank, a steadfast populist, hopes against hope that Obama will become the president who inspired millions upon millions of Americans last year with his campaign of "change." But here's an unsolicited tip: stop worrying about the Glenn Becks of the media world (who, after all, represent those who'll never support a Democrat) and look to your own ranks. The New Republic's Leon Wieseltier, for instance, whose highly critical essay about Obama, "Common Grounded," appears in that magazine's Nov. 4 issue (and it should be noted that after the President's election Wieseltier was figuratively high as a kite, so joyful for the historic moment that he might've been mistaken for Barney the Dinosaur).

Saying that Obama's "level of generality-his planetariness-is fine only for Sunday morning," Wieseltier worries that the President's preoccupation with "common ground" has led him "to some of the most amateurish formulations in modern American diplomacy." He fears that Obama, by refusing to acknowledge the very real political and cultural values of different nations, whether allies or enemies of the United States, will leave him alone "with his halo." And Wieseltier slams Obama for his "engagement" with Iran's rulers, at the expense of the dissidents there. "The demotion of human rights," he says, in reference to Iran's internal turmoil, "by the common ground presidency is absolutely incomprehensible. The common ground is not always the high ground."

It's possible that Frank, like Wieseltier, is so disappointed by Obama's first year in office that he's pulling an ostrich and retreating to trashing easy targets of the right-wing fringe. But that sort of criticism is not gutsy and isn't illuminating, which, one would suppose, is the job of a high-profile pundit. Frank could still become serious-right now, he's not-if he had the temerity to say, like Wieseltier did, something along the lines of, "Most [anti-Americanism] will not be dispelled by a black face and a Muslim name and a progressive smile. Multiculturalism is not a foreign policy."