The Slow Death of Capital Punishment

Legislative measures having failed, Gov. O'Malley has put the death penalty on indefinite hold through technicalities. 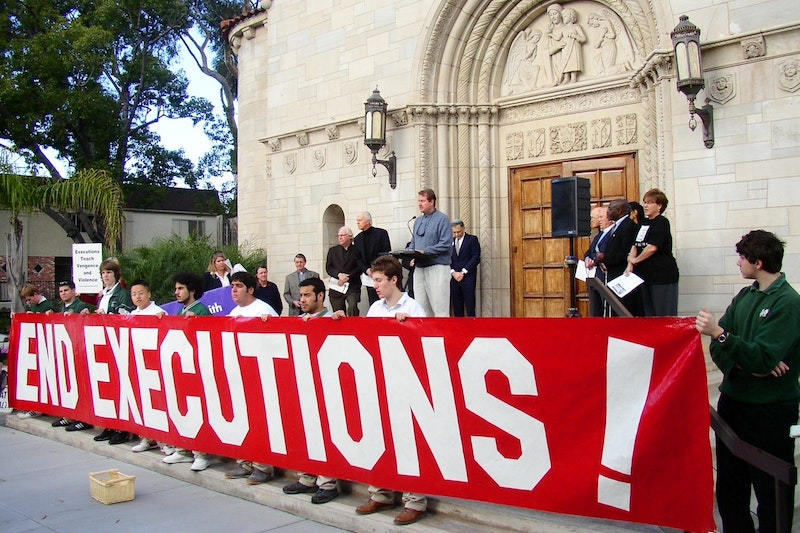 The death penalty, in Maryland and elsewhere, is dying. Its death rattle is audible in court rooms and state houses around the nation. And well it should, because it just doesn't work the way it's applied. So maybe the time has arrived to end all the delaying and posturing by doing away with capital punishment once and for all. Governor O'Malley, a death penalty opponent, tried and failed but settled for a compromise. And here we are again, hung up on the protocols of taking a life by lethal injection.

The death penalty in America is an elaborate game of angles and loopholes that anybody on death row can play with the help of a willing attorney who'll file a lifetime of appeals that have little or no relationship to the condemned person's transgression. And all the while it costs $50,000 a year to house a prisoner. There are currently five inmates on death row in Maryland

The death penalty in Maryland has, in effect, been suspended for three years in a dispute over the manner in which the punishment is applied. And the moratorium was recently extended by indirection when a review panel of legislators found "serious flaws" in the new regulations that were proposed by the O'Malley administration. The committee attempted to subpoena all 24 state's attorneys to testify because of differences over how the death penalty is applied in the various counties. The subpoenas were dropped.

Three years ago, the death penalty in Maryland and eight other states was hung up in a technical limbo. An average Jack or Jill can have blood work done or be injected with twilight anesthesia for a colonoscopy and all they'll feel is a momentary pinch. But when it comes to capital punishment, that very pinch can be considered cruel and unusual punishment if the person administering the needle botches the job. Such a blunder happened in Ohio recently where an execution was halted because the team administering the injections couldn't find a vein after two hours of jabbing.

When the Maryland Court of Appeals in effect suspended the death penalty in Maryland in 2006, however, it didn't rule on that point, as it had been asked. The loophole it found was that the process of death by lethal injection was developed by prison authorities without legislative oversight, as is required.

And now, after nearly a year of review, the 20-member panel of lawmakers has outlined an elaborate program of medical training that should be required for those administering the three-drug cocktail that, in rapid succession, is supposed to render the recipient unconscious and paralyzed with a stopped heart—if the procedure is performed properly. The legislators expressed a series of other concerns to the Department of Public Safety and Correctional Services, which prepared the new protocols. This should effectively delay resumption of the death penalty in Maryland for some time to come. To which the O'Malley administration responded: Take your time.

O'Malley did not win repeal of the death penalty last year, but the compromise that was adopted severely tightened the rules of evidence in capital cases. Prosecutors are now allowed to seek the death penalty only when there is videotaped, DNA or biological evidence to support the crime. The attorney general recently advised the General Assembly that fingerprints do not constitute biological evidence, which might require a change in the new law and provoke a debate when the Assembly convenes in January.

The General Assembly has shown little appetite for dealing with the death penalty issue. Although the House of Delegates has passed a repeal bill, the measure failed to get out of the Senate Judiciary Committee two years in succession by one vote. So another attempt to repeal the death penalty probably will not occur until 2011, when and if a 24th Senate vote that opposes capital punishment is picked up in next year's elections. Meantime, the death penalty might die by delay.

So meet Vernon L. Evans Jr., the man who's responsible for the technical glitch in the law that halted the death penalty. Most people couldn't give a fig whether Evans lives or dies. Sanctity of life isn't an issue here. Nor is guilt. Evans, in the eyes of his defenders and many of those who oppose capital punishment, is not a killer but a victim.

Evans has been languishing on death row since 1983, when he was convicted of the murders of two people in a Pikesville motel. Since then, he's been able to dodge the needle, or the noose or the chair, through 25 years and umpteen appeals. The lengthy appeals process is very costly to taxpayers but probably doesn't cost Evans a dime, which he doesn't have in the first place. A 2008 study concluded that Maryland has spent $186 million prosecuting and defending capital murder cases over two decades, with each one costing an average of $3 million. The study was conducted by the Urban Institute and paid for by the Abell Foundation.

When a person is allowed that many appeals, and is encouraged by the process to laugh at the law from behind prison bars for a quarter of a century, something's wrong with the law. The last time around the appeals process, the argument by Evans' lawyers was that his veins were too collapsed from years of drug use to accommodate the offending needles for the three-drug cocktail that shuts down the body. This, his lawyers argued, constitutes cruel and unusual punishment. Why not just say he's a sissy?

Only five prisoners have been put to death in Maryland since the U.S. Supreme Court reinstated the death penalty in 1976. In 2002, former Gov. Parris Glendening imposed a moratorium on the death penalty in Maryland at the request of his lieutenant governor, Kathleen Kennedy Townsend, as an attempt to boost her campaign for governor over concerns about racial disparity in its application. Former Governor Ehrlich overturned the moratorium when he became Maryland's first Republican governor in a generation in 2003. Two inmates were executed during Ehrlich's one term as governor.

Much of the opposition to the death penalty is generated by the Roman Catholic Church. Until the Supreme Court's Roe v. Wade ruling in 1973, students in Catholic colleges and universities were taught in their philosophy (ethics) classes that "the state has an absolute right to take a life" (ref. Msgr. Tracey Ellis, of the Catholic University of America). They even went so far as to teach that suicide, normally a certain chute ride to hell under Catholic teaching, is acceptable under certain circumstances, i.e., a nun whose virginity was being threatened by rape. (I am not making this up.)

But once the Supreme Court legalized abortion, which the Catholic Church vehemently opposes, Church leaders executed the old dipsy-doodle. To bring capital punishment into line with pro-life teachings on abortion, the Church reversed itself and decreed that the death penalty is an unlawful violation of the sanctity of life. All life is sacred, the Church declared, whether it's an unborn fetus or a killer on death row. (Note that the Vatican denounced the execution of Saddam Hussein.)

O'Malley and his allies in the General Assembly are on the money in wanting to get rid of the death penalty, whatever their motives. It's outdated, it's ineffective and just doesn't work, even as a deterrent. On many occasions, O'Malley has observed that court rulings will spark a renewed debate as to whether "all of the money we spend prosecuting death penalty cases might be better spent fighting violent crime and saving lives." And right now he's letting the courts and a legislative committee do the work of suspending the death penalty for him. Read into that what you will.

Or, as a hyperventilating legislator once observed with unintended drollery during a House of Delegates' floor debate on capital punishment, "We need a death penalty bill we can live with." Either that or get rid of it.

Frank A. DeFilippo, has been writing about politics for many years as an award-winning Maryland State House and political reporter, White House correspondent for the Hearst News Service and as a columnist and contributor for several newspapers and magazines as well as a TV and radio commentator. DeFilippo has reported from six national political conventions. He is author of the novel, Hooked.