Trump Mouths Off Against Democracy

And what else is new? 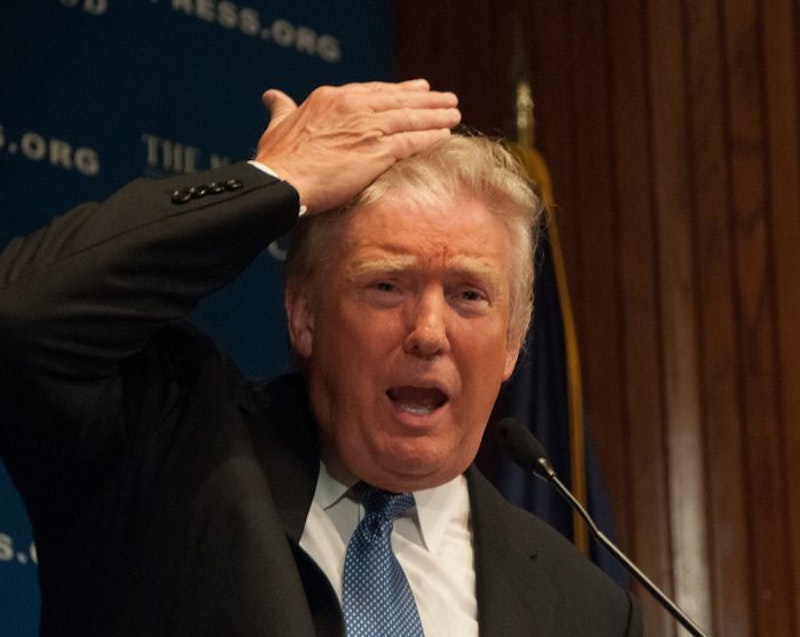 The man spoke in Alabama, where the August air hangs heavy. Perhaps one heard thunder in the summer clouds. But we know this: when Old Constitution gave voice, his words flashed like lightning; and flashing, they lit the granite slabs that undergird our nation's belief in itself. Of justice, he spoke, of liberty and of law. “We’re just absolutely way ahead of everybody else,” Donald Trump told that Alabama crowd in 2015. “In fact, you know, if this were another country, we could maybe call for an expedited election, right? I would love that. Can we do that? Can we do that? I would like to have the election tomorrow. I don’t want to wait.”

Now the man they call Old Constitution is at it again. Donors gathered last weekend at Mar-a-Lago to hear him affirm his faith in checks and balances and the rule of law. Our nation’s leader reflected on developments in China, where the president just got rid of a law that says a person eventually stops being president. “He’s now president for life,” Trump said. “President for life. No, he’s great. And look, he was able to do that. I think it’s great. Maybe we’ll have to give that a shot some day.”

Trump offered the thought behind closed doors; somebody smuggled a recording to CNN. But he would’ve said it in public. He was in front of a rally when he said the non-applauding Dems at his State of the Union were, what the hey, traitors. He was in front of another rally when he mused about having the election 15 months early because he was up in the polls. He was in front of the Washington press corps when he made a joke about possibly losing his wife: “So many people have been leaving the White House. It’s invigorating, since you want turnover. I like chaos. It really is good. Who’s going to be the next to leave? Steve Miller or Melania?” Come to think of it, he was in front of Melania too. Trump delivered his joke at this year’s dinner of the Gridiron Club, and The Washington Post tells us he was “accompanied by the first lady.”

Trump was lucky to have her there, given the headlines about his cheating. Of course, the headlines were the occasion for the joke—at these things you got to go topical. I’d say a person who could make a joke like that either has a great marriage or not a real marriage at all. Trump and Melania don’t have a great marriage, so we’re left with choice two. Unfortunately he cares as much about his ties with us as he does about his ties with her. She’s in it for the money, and we’re in it because... Well, better ask the man who embodies our democratic creed. He draws a hand across his brow, looks to the horizon, and says, “And just thinking to myself right now, we should just cancel the election and just give it to Trump, right? What are we even having it for? What are we having it for?” Well said, people’s servant. Well said, Old Constitution.