Trump Lost Because He Abandoned Immigration

Not emphasizing the core position of his successful 2016 campaign might've cost him a second term. 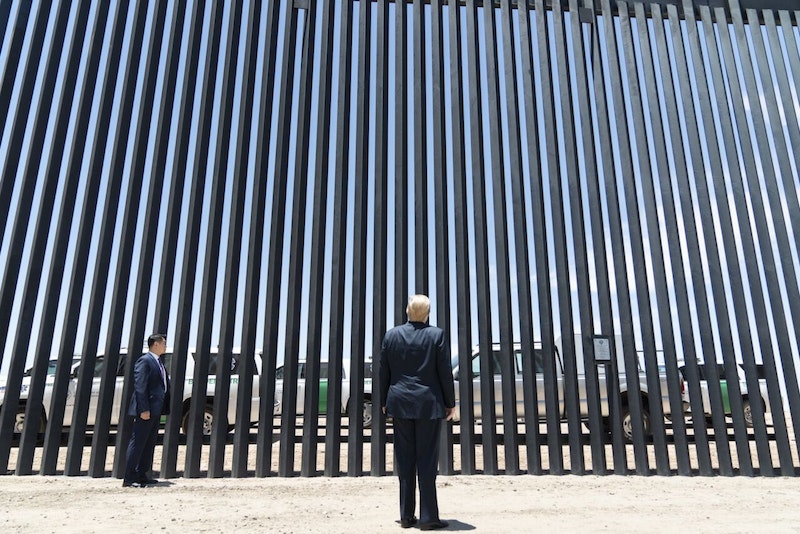 Why did Donald Trump lose to Joe Biden? We could sit for hours and come up with 100 reasons. Many disliked his pandemic response, including his criticisms of Dr. Anthony Fauci and refusal to wear a mask on TV. Others disliked his support of Republicans in Congress trying to repeal the Affordable Care Act; the non-answers he gave on healthcare during his re-election bid were brutal too. His icy relationship with John McCain hurt, as did advising his supporters against voting by mail. His rhetoric is off-putting to millions, and he lacked a coherent second term agenda.

However, one overlooked issue may be Trump’s signature issue in 2016: immigration. Not emphasizing this issue hurt his performance in 2020. When Trump ran for president in 2016, people knew what he wanted to build a wall and make Mexico pay for it. Mexico never paid, Trump claimed that he never said that Mexico would pay, and a 2000-mile U.S.-Mexico border wall was an unpopular idea (41 percent approval to 54 percent disapproval in 2016 exit polls), but he ran against another unpopular candidate named Hillary Clinton and won.

Fast forward to 2020 and the United States has a pandemic that’s killed more than 250,000 people. If there were a time for an immigration restrictionist to run for president, it would have been this year. We have a virus in our country that originated in China, arguably the biggest geopolitical foe of the United States. Many of the first coronavirus cases in the United States were from people who had been to China recently. Trump shut down travel to China and some Democrats called him xenophobic. An armchair quarterback would say he should’ve shut down global travel in late-January—correct—but not going all in on immigration restriction was unwise of Trump.

Shutdowns hurt the economy. The unemployment rate—a terrible statistic—was 6.7 percent at the end of October. Still, it indicates that millions seeking work had no job. Trump could’ve said he wanted close to net-zero immigration until the economy recovered. Polling indicates there was support for it. In April 2020, an Ipsos poll showed that 79 percent of respondents felt immigration from other countries should stop temporarily. In August, an NPR/Ipsos poll found 78 percent of respondents supported a temporary border closer, 60 percent didn't want legal immigrants to bring their extended family to the U.S., 58 percent wanted to ban guest and seasonal workers; and 58 percent wanted to ban asylum seekers and refugees. And an exit poll conducted by Zogby Analytics for the Federation for American Immigration Reform (FAIR) showed that more than 75 percent of their respondents said it was important for the country to, “limit the admission of new immigrants and foreign guest workers as long as unemployment remains high due to the COVID-19 crisis.”

Trump had the best Republican performance with minority voters since 1960 (26 percent support) but there are ways to talk about these issues without alienating them. NumbersUSA rightly tells people that immigrant-bashing is wrong and it’s not the fault of immigrants themselves that our system has flaws. One can support reducing immigration levels while agreeing that immigrants are mostly good people who want a better life for themselves and their families. Even the pro-immigration side admits that during times of high unemployment low-skill immigrants hurt low-wage native-born workers. Those workers are disproportionately non-white.

Rhetorically, Trump could’ve been somewhere between the speech announcing his presidential run where he said Mexico doesn’t send its best people to the United States and his 2019 State of the Union speech where he called for increased legal immigration (despite previously supporting the RAISE Act).

I’d love to see someone run on curbing abuse/excess to visa programs and implementing a permanent public charge rule while at the same time committing to a global initiative to end world hunger and bringing the troops home.