If Cuomo had any dignity or humility, he would reject the Emmy's ridiculous special award which he doesn't deserve. 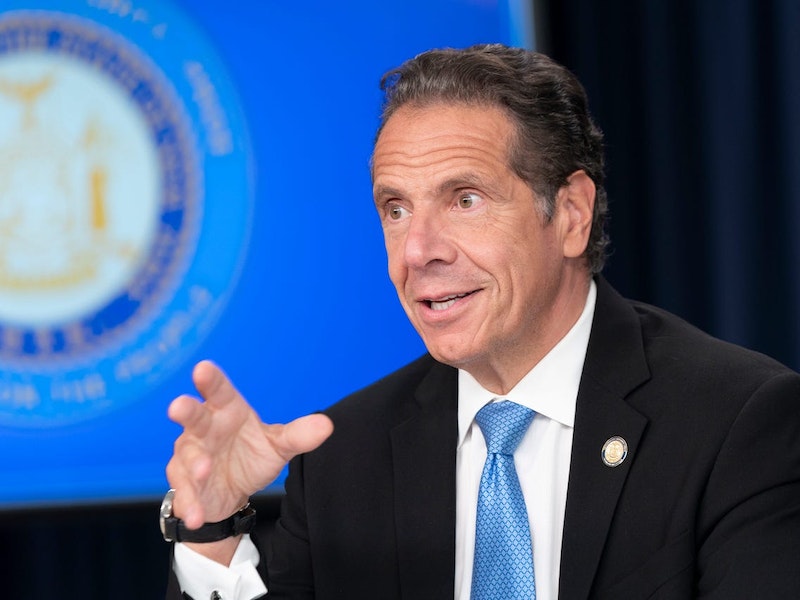 It’s excruciating to revisit the clunky transcript of New York Gov. Andrew M. Cuomo’s March 2 press conference, an awkward mix of curt and rambling sentences laden with extraneous words and oozing with condescension. It was the first in an exhaustive series of daily briefings that escalated, becoming the stage for a petty, bitter ego battle with Mayor Bill de Blasio as bodies piled up in hallways of world-leading hospitals before being dumped into mass graves.

He bragged about “moving a piece of emergency legislation,” he shared a synopsis of a phone call with his daughter as his “last point,” yet babbled on about how the start of the COVID pandemic wasn’t New York’s “first rodeo with this type of situation,” tossed out some statistics, and offered false hope.

Nobody knew on March 2 how hard New York would be hit, and it’s his job to instill confidence in the people of the city and state. However, Cuomo’s performance during this and subsequent news conferences only came off as competent because the world was comparing his ability to craft some coherent sentences with Donald Trump’s wilted and warped word salad.

News this week that Cuomo yesterday received this year’s International Emmy Founders Award, “in recognition of his leadership during the Covid-19 pandemic and his masterful use of television to inform and calm people around the world,” was met with mixed reaction. Unable to sever the cord of two decades breaking news, I was glued to the screen during the March 2 press conference and the majority of the 111 consecutive daily briefings, taking mental notes as if I were reporting it live until May 1 when the economic consequences of the pandemic forced my husband, son, and me out of the city.

As the daily death toll mounted, the tone of the briefings became more arrogant and indefensible. This was stressed-out Cuomo’s big opportunity to break into prime time, and he milked every second of newfound fandom among mostly middle-aged white women who fell for his gibberish jargon weakly disguised as sage leadership.

“The Governor’s 111 daily briefings worked so well because he effectively created television shows, with characters, plot lines, and stories of success and failure,” International Academy president and CEO Bruce L. Paisner said in the press release. “People around the world tuned in to find out what was going on, and New York tough became a symbol of the determination to fight back.”

I shudder as I reread this quote over and over, unable to fathom how any journalist could report this “news” without scorn for the notion that the Governor is being applauded for capitalizing on the city’s worst disaster.

The Founder’s Award is presented to an individual or organization who “crosses cultural boundaries to touch our common humanity.” Cuomo joins billionaire celebrities Oprah Winfrey and Steven Spielberg, whose job it is to entertain us, not to enforce state laws, approve or veto bills passed by the New York State Legislature, convene the legislature, and grant pardons, except in cases of treason and impeachment. Cuomo accepts this award with blood on his hands, gaining showbiz status for grossly mishandling the pandemic and making decisions largely driven by a desire to contradict and undermine de Blasio.

New Yorkers who retain any short-term memory may recall this stench. It reeks of now-disgraced Rudy Giuliani’s post-9/11 rise to America’s Mayor. Despite the glaring similarities, it’s little surprise that people who loathe Giuliani love Cuomo.

While his father was a far more effective leader, let’s not forget that flyers for Mario Cuomo's 1977 New York City mayoral campaign against Ed Koch littered the city with the slogan “Vote for Cuomo, Not the Homo.” The Cuomo dynasty gets a pass on homophobia from the same people who believe Trump inherited his father's white supremacy. In her valiant 2018 effort to dethrone Cuomo and effect social change, legitimate Emmy-awarding winning actress and activist Cynthia Nixon playfully subverted the catchphrase during an address to the annual Legislative Correspondents Association dinner: “Vote for the homo, not for the Cuomo.”

Cuomo’s faux heroism is bolstered by luxury lifestyle liberals, people who vote for what appears slightly left of the single-party duopoly yet break artisan peasant bread alongside billionaires who fueled Trump’s campaign caravan. Only holy capital “D” Democrats are absolved from the sins of the powerful fathers.

Stay-at-home downtown Manhattan moms who outsource the mothering to fork over more for a 45-minute core strengthening session than the average American spends on food for a week pardon their husbands for voting Trump. “I don’t get why he voted for Trump. He loves all my gay friends and he bought all his workers’ kids new iPads after he had to lay them off.” The husband votes for Trump because he doesn’t want to be “punished” with taxes on their Tribeca townhouse and her upstate “spiritual home.”

Women who kitten heel into houses of worship once a decade to bless the inheritance they secured through heterosocial contracts of exchange (upwardly-mobile marriages) have canonized Cuomo a civilian saint. “I (heart emoji) Cuomo” and “Cuomo is the GOAT” won “likes” and “loves” of approval on Facebook. Cuomo’s bespoke manufactured rhetoric sounds like a doctoral thesis defense to someone who hires a highschooler to help their preschooler learn math on an iPad.