Political Self-Talk During the Trump Disorder 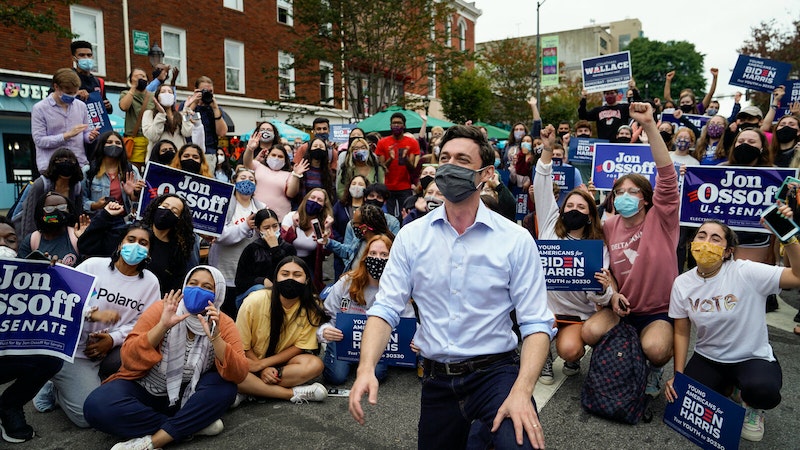 The air has grown frantic with people reassuring themselves. “We will show massive and unprecedented fraud!” Donald Trump says, or tweets, brooding on his election showing. But will the soon-to-be ex-president campaign in Georgia’s Senate runoffs? “He’s got a vested interest in making sure we keep the majority,” a hopeful John Cornyn tells Politico. The Republican doesn’t argue that his party’s leader might care how the party does. He accepts that Trump must have a personal angle. In this case, the Senator figures, it’s protection of legacy—a Democratic majority might take down what Trump put up, so Trump will be visiting Georgia. The article tells us that other senators in Cornyn’s party have a different rationale. They’re “assuming” he’ll show, the article says, because Trump “loves to campaign.” In other words, he’ll feel like it.

To cheer up, Republicans can listen to Chuck Schumer, leader of the Senate Democrats. “There is this conventional wisdom that Democrats don’t win runoffs in Georgia. That’s not true,” Schumer says stoutly. “There were two runoffs in 2018—not much Democratic money or effort behind them, and each was within 4 percent.” He means the Democrats lost. (Mr. Burns after the Harvard–Yale game: “Honestly, I don’t know why Harvard bothers to show up. Why, they barely won this year.”)

Back to presidential self-talk. “It’s all a continuation of the never ending Witch Hunt,” says a tweet, and: “900,000 Fraudulent Votes!” Roy Blunt, an obedient senator, suggests, “You know, the president wasn’t defeated by huge numbers. In fact, he may not have been defeated at all.” That’s ominous, but Dana Milbank reminds us that our nation’s highest referee still operates within the law, more or less. “Trump has reshaped the Supreme Court—but not that much,” says the optimist. Milbank counts off three liberals plus John Roberts and Brett Kavanaugh, two “pragmatic conservatives.” The two guys “will, hopefully, be the ones to say no to Trump’s coup,” we’re told. The piece accepts without comment that four justices would say yes.

To keep Trump happy, the executive branch is going ahead with its budget deliberations for next year, the year that Trump’s scheduled to leave office and take his priorities with him. “They’re pretending nothing happened,” an official says. “We’re all supposed to pretend this is normal, and do all this work, while we know we’re just going to have to throw it away.” Well, Joe Biden has to pretend too. “We’re going to be doing exactly what we’d be doing if he’d conceded and said we won,” Biden says. In the meantime Trump hasn’t conceded. Everything Biden does has that “if” floating above it, and Trump wants the shadow to remain all through the Biden administration. Will Republicans object? I’m not reassured.