Numbing us all to the possibility of mass annihilation. 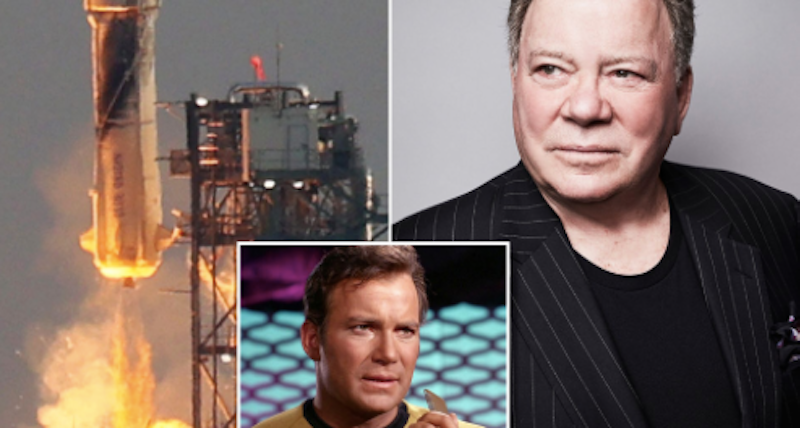 Whether you have a beloved friend in the hospital or are a major celebrity traveling to outer space, you can’t help noticing life’s greatest achievements being shadowed by the looming menace of death these days.

I hope—we all hope—William Shatner, age 90, will return intact from a planned flight on Jeff Bezos’s real-life spaceship, but you know darn well that part of Shatner’s thinking had to be, “Well, I’m 90, and it will be an amazing and fitting way to go if things don’t work out.” That’s only natural. (I notice he has outlived not only several Star Trek actors but about half the main cast of the similar 1990s show Babylon 5, now scheduled for a reboot and home to a captain character who once said of his own impending death, “Well, 50 is a good long run!”) Shatner certainly now wins the ongoing contest to see who can do the most social distancing. Win or lose, it’s as though he’s at least briefly taken from us.

Being off-world will at least give him some respite from this planet’s rulers, the Cancel Culture mobs—though a professional focus on finding life on other planets didn’t save a University of Chicago professor who ran afoul of such mobs recently. In our fights over both culture and science lately, there’s a pessimistic sense that a plague or something might kill us all soon and so we’d better wrap up all outstanding business and resolve all disputes, or at least get in a few final vicious licks.

Contrary to the current Bond movie title, it seems as if the authorities would like us to grow a bit pessimistic (and in the process passive) and conclude this is a good “time to die.” That’s what renegade android Roy Batty called late-2019 in the mournful climactic scene of Blade Runner. It feels like the real world has been playing out a version of that scene for about two years now.

Not that there haven’t been good times. I’ve been to about five small gatherings of libertarians in just the past month or so—and at least one of leftists, but the usual political issues all seem secondary for now to the miraculous yet depressing fact that people are alive and functioning, whatever their philosophies or histories of mental illness. But seriously, it’s good just to confirm people haven’t given up—and I think even the most control-freak COVIDians are growing tired of things like that hospital in the news for forbidding a severely ill patient from getting an organ transplant due to not being vaccinated. Let people carry on.

Not that I or anyone else can likely bring himself to believe normal, casual living will be possible again for years even if COVID vanishes. Does anyone else feel as though the COVID period was an anxiety dream but all history before that’s now remembered as another absurd dream, and any likely future is also palpably a bit unreal? Maybe the world is nonsense and always required something like the willing suspension of disbelief, now rendered too exhausting to maintain.

A time of real or imagined planet-wide death is also the perfect time for a romantic breakup sending ex-lovers (and divided parents, alas) to different planets, and while businessman Elon Musk plans his rocket trip to Mars (rivaling things like Bezos’ launching of Shatner into space), his ex-girlfriend and babymama Grimes, the cyberpunkish musician, retaliates by fantasizing about starting a “lesbian space commune” on the Jovian moon Europa. Presumably, she’s joking about that, as she was when letting herself be photographed reading Karl Marx shortly after the breakup with one of the world’s richest men.

She may not really believe that any material setting can bring happiness, since in the song “We Appreciate Power,” which sounds like a dark anthem in honor of tech moguls such as Musk, she sings, “And if you long to never die/Baby, plug in, upload your mind/Come on, you’re not even alive/If you’re not backed up on a drive.” As with Shatner, she makes it sound like the right time to be leaving the planet, but I am less confident somehow that Grimes ever lived a fully human life before departure. Shatner, at least, has been very emphatically human.

An article in the leftist journal n+117 years ago made the depressing observation that fuzzy, slow indie music of the dawning century such as Radiohead sounds more like a glum reaction to oppression than like rock ‘n’ roll freedom, and someone else theorized years ago that such distorted, molasses-like rock (not to be confused with the wonderful, playful sounds of shoegazer, though both sorts of indie music use plenty of fuzzy guitars) may have been a byproduct of Millennial musicians and fans taking antidepressants instead of consuming pot and beer like the rockers of old.

I don’t know that a culture in this state of mind can turn upbeat and optimistic, but perhaps we can at least recapture a jarring, energetic feeling of dystopia—wackiness instead of outright despair. Make the world hectic again instead of leaden. Grimes isn’t all that far off. Fun is still possible.

In the meantime, in a period when it’s hard to believe there can be eros that’s not mingled with death, it’s apt the horror movie franchise Hellraiser—as far removed from the utopian optimism of Star Trek as it gets—will soon be getting a revamped and gender-swapped female version of its monstrous main villain Pinhead. So, in enlightened current fashion, we trade a male torturer-demon for a more overtly sado-masochistic dominatrix-demon. Hellraiser is a franchise created by a gay fetishist, Clive Barker, who was always living out his own dark fantasies through this art. Maybe the Rubik’s Cube-like, hell-opening puzzle called the Lament Configuration at the heart of those films should finally be replaced with something more frankly representative of our own hellish present-day world.

Apostate gay socialist Glenn Greenwald recently joked that the ever-lengthening abbreviation for non-straight sexual orientations, now 2SLGBTQQAI+ in Justin Trudeau’s much-mocked formulation, looks like a good computer password, since it seems impossible for a human to memorize or an A.I. to crack. The perversions held within the Lament Configuration could add up, when finally properly combined, to something like that abbreviation, only with more violent and fatal options thrown in—and the hell thereby unleashed, with Barker’s distinctive fanged, leather-clad demons spilling out, could at long last be revealed to be just our own exhausted yet conflict-filled world, the new Pinhead refashioned to look like a spike-covered walking COVID molecule, constantly fighting with other, highly opinionated demonic factions. We caused all this.

Is it any wonder people long for it all to implode and vanish, or for some new off-world avenue of escape to open up? These neurosis-inducing problems will all be moot if China and the U.S. nuke each other over Taiwan, of course, so there are still the old-fashioned, traditional ways to go.