It won’t be so long before Maryland is under water. 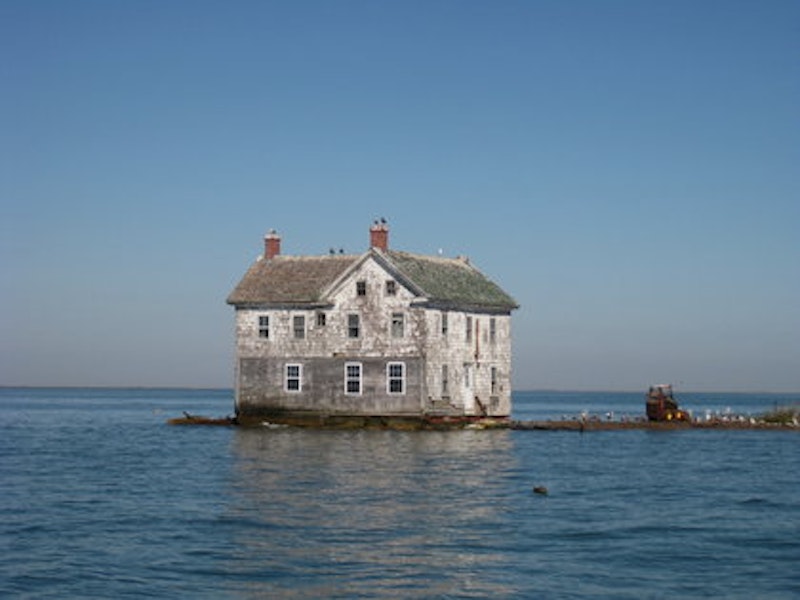 Kiss Harborplace goodbye and say so long to Fells Point, Canton and Middle River. Ocean City’s a goner and so, too, is Crisfield. Kent Island will be underwater as will the miles of shoreline that stretch along Maryland’s inland waterways. The ponies on Assateague Island will have to sink or swim. In fact, the entire East Coast could become one water-logged bog of sunken history like a modern lost Atlantis.

Ninety-seven percent of scientists from around the world, as well as the U.S. Military Advisory Board and the National Academy of Sciences—one of the rare times civilians and military share a view—agree that climate change could devastate the globe’s low-lying areas by the end of the century. Extreme weather swings, from the polar vortex to ice melt, are causing civil unrest, population movement and a global competition for vanishing resources and livable space.

An 840-page report released by the White House and written by 250 scientists and government officials stated: “Corn producers in Iowa, oyster growers in Washington State and maple syrup producers in Vermont are all observing climate-related changes that are outside of recent experiences.” The same could be said of weird weather almost anywhere in the world.

“I do not believe that human activity is causing these dramatic changes to our climate the way these scientists are portraying it,” Rubio said in an interview with ABC news. He later modified the statement after inciting a self-destructive blowback, acknowledging that climate change is real but adding that new laws won’t address it.

“See, in my humble opinion, folks, if you believe in God then intellectually you cannot believe in man-made global warming,” Limbaugh says to all those dittoheads on tractors and in 18-wheelers. The Bagwan of bloviators conflated creationism with environmental science, kind of like the Scopes trial connected to a public utility outlet.

But Limbaugh, it appears, may have taken God’s name in vain. An ecumenical cohort of the U.S. Conference of Catholic Bishops, the Evangelical Lutheran Church, the United Methodist Church, the Presbyterian Church and other denominations as well as Pope Francis have all spoken out about the global threat of climate change and the need for action while the crisis is still manageable.

In case anyone needs a reminder, recall a few years ago when Maryland’s inland waters experienced a mild surge, kind of a Tsunami tease. Baltimore’s trashy harbor water covered Pratt St., people were wading in hip boots through Fells Point’s cobblestone streets, and the snug Annapolis harbor was under water. Middle River was wiped out and residents are probably still trying to collect flood insurance. Their policies didn’t cover acts of God and nature and, possibly in futuristic cases, man.

Omens of apocalypse are all around us: Rising sea levels; ice melts; extreme fluxions in weather; 2012, the hottest year ever recorded; the most snow in two decades; half the hottest years on record have occurred since 1998; tropical cyclones moving north; drought; wildfires; an increase in pollen; the West Antarctic ice sheet is disappearing—much of it attributed to trapped heat in the atmosphere caused by fossil fuels such as coal, natural gas and oil.

Maryland is about two-thirds land, give or take a few acres, and one-third water—9707 square miles of land and 2699 square miles of water. The state also has 4360 miles of coastline, with 31 percent experiencing some erosion, mainly because of rising sea levels attributed to global warming and its lethal companion, ice melting.

The Maryland Department of Natural Resources estimates that 69 percent of Maryland’s coast is currently eroding at a rate of 0.58 percent a year, with 48 miles of shoreline experiencing erosion at rates greater than eight feet a year.

And here’s the cropper: The 16 coastal counties on the Chesapeake Bay watershed are experiencing a sea level rise at twice the rate of the global rise and the sea level rise could double the erosion rate in Ocean City over the next 40 years. The EPA projects that Ocean City will erode 85-153 feet by 2025 if no action is taken, with a doomsday forecast of erosion loss of 216-273 feet. In Dorchester County, halfway down the Eastern shore, 54 percent of the shoreline is eroding.

Still don’t believe in climate change? Fully 580 acres of Maryland shoreline are lost each year due to erosion caused by rising waters. Smith Island is receding so fast that many of its remaining residents are retreating to the mainland. And Holland Island, in the Chesapeake Bay, has disappeared, taking the last house with it to the murky bottom.

All totaled, 376 miles of Chesapeake Bay shoreline is eroding at more than two feet a year. And the disappearing land takes with it habitats for all kinds of flora an fauna—marsh lands, crabs, oysters, clams, fish—as well as livelihoods. There isn’t enough riprap or sand plants to protect what man is intent on destroying.

Human beings are often the subject of their own mirth. The Keystone Pipeline is an example of humor (and money) at work. So, too, is fracking. The sand tar oil that would slosh through the pipeline from Canada to Texas isn’t fit to use in America. It would be refined and shipped to China and other emerging countries to contaminate the atmosphere and send the airborne toxins back to its points of origin.

Ditto fracking, which poisons everything around it, including people. So much so, that the CEO of Exxon, one of the most aggressive frackers among many, has fought to prevent fracking from occurring anywhere near his expansive Texas spread, according to reports.

Yet despite filing cabinets of evidence, the public remains mildly ambivalent about human activity contributing to climate change. Gallup finds 57 percent believe that humans, by burning fossil fuels, cause global warming while the Pew poll pegs it at 41 percent.

Here’s a hint at maybe why roughly half the poll respondents, like Limbaugh, reject human behavior as a cause of climate change, from a letter to The Washington Post: “While this may seem quaint and dated to some, the Catholic [and many fundamentalist denominations] worldview sees the Devil at work… For modern Catholics, it is not hard at all to see the work of the Devil today around the world or to understand why Pope Francis speaks of it often.”

It’s convenient to absolve man from any wrongdoing when Satan’s a handy scapegoat to blame for human malfeasance. Have a great summer and enjoy the Ocean City beach while it’s still there.

Pictured: The last house on Holland Island, Dorchester County, Maryland's Eastern Shore, in October 2009. It fell into the bay in October 2010.