The media pranksters printed a million fake New York Posts last week, but do they have a point beyond self-promotion? 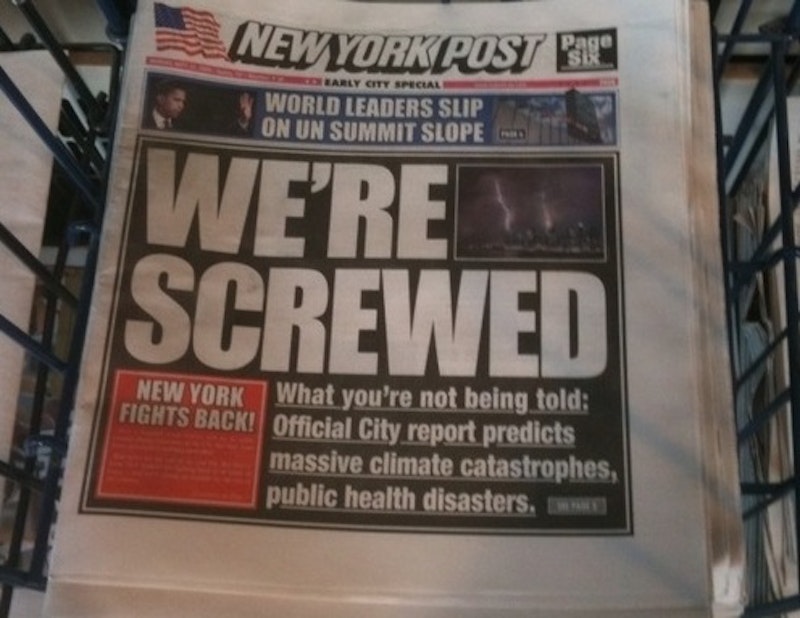 On many week day mornings, amidst Vesey St.'s frantic commuter stampede, I make a quick 50 cent donation to the floundering industry known as print journalism and buy the New York Post. Not the most credible news source, perhaps, but it's usually the first paper stack I see amongst the chaos of blazers and pantsuits, as bodies are channeled between the concrete side of the Federal Post Office and the tall, barbed fences that still surround Ground Zero.

But much to my surprise on Sept. 21, the Post-with the headline "WE'RE SCREWED"-was handed to me for free. I didn't think twice about the sensational title, but when browsing through the pages at the office, I realized something was awry. Every single aspect of the paper dealt with climate change, right down to Page Six, which "gossiped" about environmentally active celebs Seth Rogen, Pam Anderson and Brad Pitt.

I had picked up one of the one million "fake" Posts distributed by a group known as the Yes Men. According the Yes Men's official blog, approximately 2000 volunteers handed out copies of the fake newspaper throughout Manhattan that Monday, the eve of the climate change conference at the United Nations.

The hoax, which apparently cost $40,000 to pull off, is just one of many examples of the Yes Men's creative brand of protesting and was not the first time the group printed "special editions" of NYC newspapers. In November 2008, they pulled a similar stunt by distributing thousands of copies of a fake Times issue headlined "IRAQ WAR ENDS."

Co-founded by Jacques Servin (alias Andy Bichlbaum) and Igor Vamos (alias Mike Bonnano), the Yes Men have been pulling off high-profile pranks for much of the past decade. After the release of their first film, The Yes Men (2004), the pair have impersonated corporate spokespeople and WTO officials numerous times, a practice they call "identity correction." Perhaps their most famous "identity correction" prank occurred December 3, 2004 when Bonnano, posing as a Dow Chemical executive, appeared on BBC and took "full responsibility" for the Bhopal catastrophe of 1984 that affected hundreds of thousands. As Bichlbaum and Bonnano explain on their site, Dow's stock value plummeted in the prank's aftermath, and the Yes Men came to an abrupt realization that is the core reason for their on-going elaborate hoaxes:
We have created a market system that makes doing the right thing impossible, and the people who appear to be leading are actually following its pathological dictates. If we keep putting the market in the driver's seat, it could happily drive the whole planet off a cliff.

The Yes Men's climate-related hijinks did not stop with "special edition" newspapers. Last Wednesday Bichlbaum was arrested and several other Yes Men ticketed when the group held an outdoor "promotional conference" in the DUMBO section of Brooklyn to endorse a rather hysterical product called Survivalball. The large, orb-like suit bearing a Haliburton "H" logo retails at an affordable $3 million and is intended to "keep corporate managers safe even when climate change makes life as we know it impossible." This "gated community for one" is the "only rational response to climate change," according to a one Fred Wolf, an imposter employee of Haliburton.

The Yes Men's latest pranks come just before their new movie, Yes Men Fix the World, is scheduled to make it's US debut at lower Manhattan's Film Forum theater on October 7. The documentary has already collected numerous accolades abroad, including the Panorama Audience Award at the Berlin Film Festival and the Official Selection of the Sundance Film Festival.

In addition, The Yes Men are open to suggestions on new ways to protest and encourage volunteers to join their cause. They have an extensive list of "challenges" for volunteers and according to the Yes Men site, many organized groups are already hard at work. Some challenges include "Hijack a conference virtually," "Correct an Identity Online," "Crash a Fancy Event" "Engage in Jobjacking," and "Create a ridiculous spectacle."

That final suggestion reminds us that the Yes Men brand of audacious, comedic political activism is not unlike Sacha Baron Cohen's characters Brüno and Borat. Nor is it dissimilar from the humor of political guerilla graffiti-artist Banksy. Like Baron Cohen and Banksy, the Yes Men use sarcastic political satire to effectively illuminate society's epic fails. They take commonly accepted or ignored failures, propose these failures in extreme, humorous forms to illustrate their absurdity, and keep a straight face while doing it. The result of this intelligent and effective formula is a powerful political statement disguised as a comical spectacle which makes us, at first, laugh, then think: Are we laughing at the amoral, nonsensical world we live in, or are we laughing at ourselves for having the audacity and stupidity to let it exist in this way?